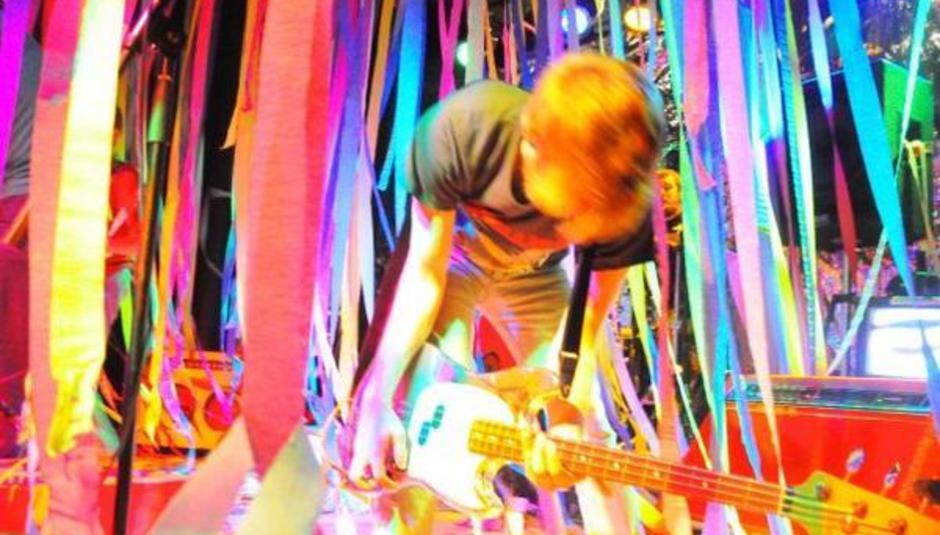 Having stayed up all night to watch the Oscars, I am in a right funny mood today. And you will have to read what follows if you want to work out if that is funny-ha-ha, or funny-she-is-kerrrazzeee. Of course, if it is the latter, I am going to top myself.

Fanfarlo - 'Harold T Wilkins, or How To Wait For A Very Long Time’ (Atlantic)

Birrova worry, isn’t it, everyone, that sometimes it takes a whole three reviews before I work out what I really think about a band. Or, at least, that it occasionally takes me that long to firmly establish a position I am comfortable with. I mean, anyone would think this column had become an exercise in showing off, a sort of weekly musical mind-tug (tug in the perv sense, what else), after which I post the ill-formed and shapeless results before you good people. And this brings me in a roundabout fashion to Fanfarlo who, third review in, come out with a belter, and a good name for a song. Even if it should really be called 'Harold Wilkins, or How To Wait For A Very Long Time For Someone To Write A Review That Does Not Also Make Mention Of Beirut Or Arcade Fire' – and of course, having made this aside they will have to wait some more; queuing in earnest for some review-based equity. ANYWAY, it turns out that our first alternative title namechecks a Mr. Wilkins – who, as a result of what we shall loosely call ‘research’ for this column, I now know is a flying saucer and ancient torture chamber enthusiast, crumbly Oxford scholar and reporter of all things Logie Baird. Which is nice for me, I like songs what are named after British oddbods, just like the lovely William Henry Miller one Meursault done last year. In the end though, whatever (or whomever) the song is about, what matters is that Fanfarlo are that joy-making thing – a band who make fully-realised, rousing and squiffily swaying pop songs that are always a pleasure. And I am an idiot who spends too much time aligning my smartarse stripes, to not have noticed this sooner.

When I was about fourteen, I was, for many reasons, mildly obsessed with Suzanne Vega’s The Queen & The Soldier. The first being that it was about how WAR IS BAD (really weird, but this is heggzactly what I thought when I was a youngling!), but also there was that wonderful line where Suzy goes off-piste with the phrasing and sings ‘Your Highness, your ways are very strange’ - and also, all that talk of swallowing a secret ‘burning thread’ that cuts the poor poppet and makes her bleed inside (I don’t need to point out here that any female singa-songwriter-penned, doom pop song that mentions ‘bleeding’ has a particular charm for teenagers, do I? No.). Also, not that I want to spoil it or anything [I DO], but the Queen only goes and tops the soldier in the end. Cuh, women, etc. Anyway, here are First Aid Kit with their take on the theme, and it has them meeting another of these rather flawed rulers, except this one has a body that ‘was beginning to rot’ and he can’t cope either, his wife is off and she’s taking the cat and everything. What all this flippancy will not do, of course, is compel you to listen - so let me say how ‘I Met Up With A King’ is a deliriously swoony affair, not least because Klara has my favourite of all the current crop of alt ladychops [you know, like normal ladychops, but they add a dash-of-a-pash on Gram Parsons to the pop bowl YAGETME] and they really are the sort of band that makes grown men cry, like a fourteen year old girl might. [Do you see what I have done there, everyone, I have started with a reference to myself at fourteen, and then obliquely I BRUNGED IT ALL BACK at the end. Honestly, someone out there is missing a trick in not hiring me to teach jurnlism.]

I have listened to The High Road what, thirty times, and there are moments when I think to myself ‘Lord alone knows what it is, but there is something in the gentle straining of Mr. Mercer’s voice that does something to one - and it is almost as if it had a special frequency, (born of long, dark nights when James cannot even get a one-way, second class ticket to Bedfordshire) a frequency that pushes the yearnful buttons of Shins fans in a way high frequencies gain the attention of ‘dogs’. I mean, obviously that is not exactly what one thinks - it is What I Think For The Purposes Of This Column, What I Really Think being (I hate to break it to you) a whole other thing entirely - and sometimes (whisper it) just the tiniest bit lacking in truthiness. ANYWAY, sometimes I think that, and other times I think ‘JESUS WEPT MERCER, YOU AND THAT BURTON MAY HAVE BECOME THE BEZZIEST OF BEZZIES BUT FACK’S SAKE, YOU [jabs finger in direction of Mercer] DONE CHUTES TOO NARROW! * YOU * WROTE THAT LYRIC ABOUT GRABBING THE ‘YOKE FROM THE PILOT’ AND DRIVING ‘THE WHOLE MESS INTO THE SEA’! AND THAT * SPOKE * TO ME, MAN. AND AS FOR YOU, BURTON [starting to alarm them now, publicist stretches for panic button] YOU DID THAT DEFINING, PERFECT GREY ALBUM, THAT ‘THING’ THAT WAS QUITE LITERALLY THE BEST THING I HEARD FOR ALL OF THE PAST DECADE! WHERE ARE THE BEATS MATCHED TO THE YEARN? WHERE ARE THEY? WHAT HAVE YOU * DONE * WITH THEM?’ But that is not always, for mostly I love it and think the former, and I enjoy ‘The High Road’. Because I remember that their collaboration was not funded by me or directed for my own personal enjoyment, and it IS good (though a bit too pleasant, if you ask me) - but perhaps it’s just not exactly what I wanted, and I JUST think they should have CALLED ME and MAYBE JUST CHECKED that they were doing SPECIFICALLY what I EXPECTED. Musicians are disobedient shits, I don’t mind telling you. Watch here

The fact that ‘Stick To My Side’ starts with what sounds like wind chimes should be enough to have me scrawling ‘OMG I * HAY * CHOO’ on the vinyl with the nearest, bluntest compass [pointless aside here, but the threat of compass+vinyl has got me through many a blerk-centred dilemma, it is about #4 on my Top Ten Frets]. So even though I don’t happen to think ‘Pantha’ [PLEASE let his real name be ‘Clive’ or ‘Darren’ please Dog, pleeeeease I will do * anything *] is doing owt to break the genre-u-tron with his latest effort (oh Lore, there has been a whole cavalcade of wank written about ‘Black Noise’, I am not sure if you have seen it] and the thing is, on ‘Stick To My Side’ he doesn’t exactly let fly with Noah in quite the way one should like [WARNING FOR DIVS LIKE I: THIS IS NOT AN ANIMAL COLLECTIVE RECORD] and even though this is not a song that even ‘builds’ like I remember minimal techno doing when I was mental on it [eighteen, first year of university - I only done two, then out I dropped – and it was the first time of many I abandoned ‘indie’] it is all rather [ohdear, someone else should be reviewing this] pretty. I’m not sure this is quite enough for me, so Mr. du Prince may have to go back to his drawing board along with James and Brian and just have A LITTLE THINK about what he has done and why it is not exactly aligned with my personal requirements. Don’t get me wrong, it is still very good

‘I’m a drunk. I’m a drunk. One rum, one vodka, one coke, one smoke. Mum drunk, Dad drunk, both drunk, dead drunk,’ trill the ladies of the Gaggle choir, and also ‘Drink gin, get thin, win-win, win-win’ – making one wonder exactly which community church hall they hail from and when exactly I get to join their alterna-choir, my only local options being the local Amateur Dramatic Society [current production: a Noel Coward farce]. And I think Gaggle - or GAGGLE as they shoutily have it – are on about wimmin who binge on those amazingly massive bottles of Lambrini it is possible to procure for less than two pound and how it might be wrong to malign them (the wimmin, not the Lambrini, which is never anything but ace). Now, in the interests of transparency, it seems only fair that I point out that I am just the tiniest bit shitted of face as I write this, and spookily (Gaggle do look like what an ex-friend of mine used to call ‘spooky cows’) I really am feeling a bit ‘win-win’ as the tiny little globules of ice-breaking winey wonderment dull one’s synapses and take all one’s worries away. I mean, I realise that being drunk when one listens to ‘I Hear Flies’ is missing the point in quite spectacular fashion - as if the point were a huge red double-decker, hulking past and still I fail to see it – but this strikes me as rather amusing. At least until we get to the meat of the song, concerning as it does seeing roses and smelling flies, which frankly sounds a bit disgusting. I don’t know, why can’t these ladies sing about New Look shoe department or their cats instead of troubling their silly little heads with how women alarm people when they are as ragged and undone as The Mens. Video below, although WARNING, because it is a bit ART PROJECT - although funnily enough, that is * exactly * the sort of thing I find totes hilarious when I am boozed.

Colourmusic are going to bust they speakers if they are not careful, with their blamming old joannas and, I imagine, fun-to-play sledgehammer riffings. And I am willing to bet it really _is_ their favourite and best song to play out live - one can imagine many an internal cheeky grin happening inside they brains when they see it coming up on the set list at their feet - all YESWEAREGOINGTODOTHEFUNONE, which – in a strange twist of actual synchronicity (unlike everyone else this week) – is exactly how I would feel if spacebar allergics Colourmusic let me be in their band and play it. BLAM BLAM BLAM BLAM and CHUGGA CHUGGA CHUGGA it goes - and even though there should probably be a sensible equivalent to the Kill Your Darlings, writers rule for the people of music [if there is one, do enlighten me] we will let this foursome get away with this darling of a song, because it is such top larks.

Black Daniel - ‘I Love You But Don’t Touch Me Cos You’re Sick’ / ‘Move Like Royalty’ (Free download, here)

Hallo…I Love You! – ‘Walk Me To The Sea’ (Rekord Meister)

Bertie Blackman – ‘Black Cats’ (Forum 5) Australia’s answer to Florence, apparently.
God save us – or rather, me - from press releases. THIS IS WHY I DO NOT READ THEM.