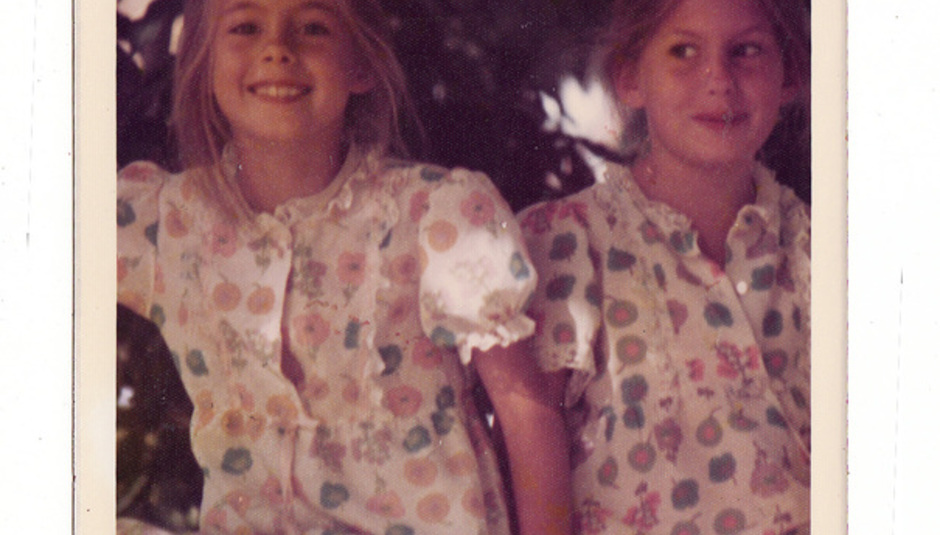 Inevitably I've been asked a lot recently about what a "Sisterworld" is. It's not an easy thing to describe.

I think part of the reason why we named this album Sisterworld was because of how familiar and foreign it sounded. On the one hand, when the word 'sister' is used as an adjective it's defined as something which is closely related i.e. sister ships or sister cities - familiar. On the other hand, the broader definition of 'sisters' is strictly a feminine one - "A female having the same parents as another" - which is an entirely foreign concept to us Liars because we're all male. In this way, the metaphor of a Sisterworld contains for us a sense of familiarity but also an awareness of the mysterious unknown.

With this in mind, I thought I'd ask my two older sisters what it's like to be, well, sisters...

First though, a brief history...

Both my sisters where born in Tokyo within two years of each other. This was ten years before I was born (by which time they'd already lived in Italy and the Philippines). Growing up, I was in many ways unaware of my sisters because of the age difference. They moved out of home and to other places before I was even a teenager so it wasn't till much later in life that I learned who they were. And boy are they different! Like diametrically opposed.... Still though, there's this massive and palpable connection between them.

Kyle Andrew is a sister, wife and mother.
She's Executive VP Marketing at Kate Spade and also a passionate proponent of Women for Women International

Lisa Andrew is a sister, wife and mother.
She's a multi-media artist with a consistent focus on drawing and installation. Recently she's been layering felt, fibre and mixed media to create new and distinctive 'interfaces'. Some of her work may be seen here: http://www.artnet.com/dietzschold.html

Q5. Did you enjoy growing up with a sister?

KYLE: Yes
LISA: Could not imagine it otherwise

Q6. How often do you see each other?

Q7. Can you describe in 3 words your relationship with your sister?

KYLE: Not really – it’s too complicated to sum up in 3 words. If pushed I would say “Essential. Complicated. Nice” but I still don’t think it covers it...
LISA: Powerful, prickly and understanding.

Q8. Can you describe how its different to your relationship with your brothers?

KYLE: My sister and I are closer in age, and were older when our brothers arrived on the scene, so we had spent quite a bit of time together before, and therefore have a different sort of bond. Because we were older when they showed up, we had more of a mother or babysitter role with them than a true sibling role, especially early on. So that has affected the relationship somewhat. There is also a feminine connection between my sister and I that is different from what we have with our brothers...

LISA: Experience and geographical distance and our differences in age - Kyle and I have a similar perspective that has occurred with age. As well as memories, Grimms fairy tales, rose red, snow white, etc. We are women.

Q9. What's similar about you and your sister? i.e. do you share any common traits?

KYLE: We’re both turning into our mothers, even though we’re both in denial about it!
LISA: History, ideals (not lifestyles). We respond similarly and are agitated similarly, facial expressions (and good looks, haha)

KYLE: She’s more creative and unconventional.
LISA: Lots. We are, in many ways, diametrically opposed but complementary i.e. I am more emotional, sensitive perhaps. It's something I have admired more in Kyle, she's more pragmatic.

Q11. Have you ever felt a mental or physical connection with your sister? i.e.: Telepathy?

KYLE: Not telepathy, but we do often have the same thoughts on some things, especially family matters...
LISA: Yes.

Q12. If you were able to choose whether you grew up with either a brother or a sister what would it be?

KYLE: Probably a sister, but I would miss not having brothers.
LISA: I don't think it matters, either, it's timing I guess.

Q13. Being that you are my sister, what were your first thoughts when you heard the new Liars' album was called Sisterworld?

Last time I saw my sisters I made them mix cd's. These were the songs I gave them...

Listen: Spotify playlist of these Mixtapes (with a few substitutions for unavailable tracks)

Above is a song I made with my sister Lisa called "Seven Singers". It was for a project she was doing that involved filming herself and six other female visual artists singing together. She shot the video in Sydney then sent me the audio to make a song from. Note: Lisa's voice is the first one you hear on the track...

The other artists participating in the piece were:

Here is a video of it: