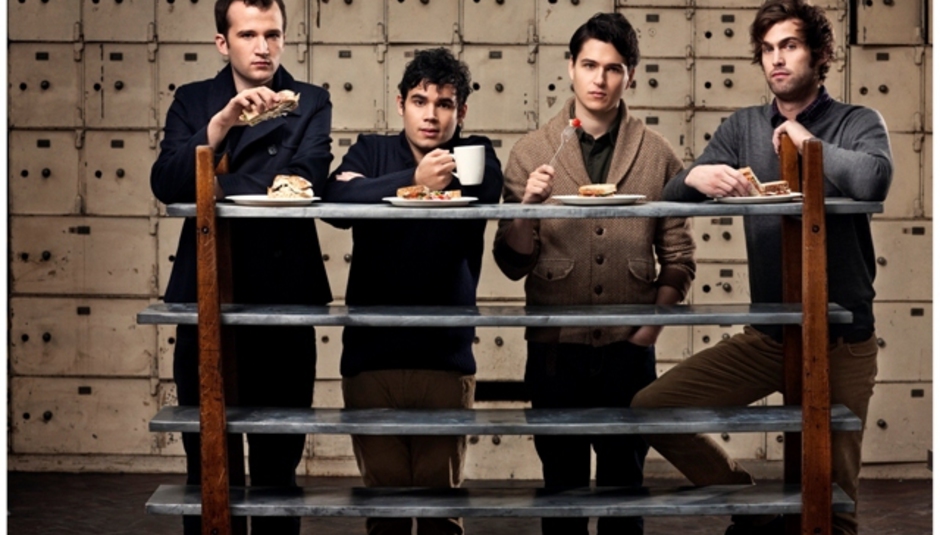 You've read the reviews. You've listened to the album. You've possibly just got back from queuing for tickets at Rough Trade and are maybe contemplating going to that Club Vampire Weekend thingy in Dalston on Friday. But what's the REAL story behind the New Yorkers' second album, eh? EH? Bassist Chris Baio (left) offers DiS the straight dope, track-by-track stylee.

This song started with the opening lyric "In December, drinking Horchata I look psychotic in a balaclava." Ezra wrote it while he was still a teacher in Bed Stuy. On this track we had a bunch of outside musicians come in and record parts. Maura Refosco, who plays percussion with David Byrne and is in Thom Yorke's new band, played Marimbas and a bunch of other Brazilian percussion on the track. Marcus Farrar, who plays with Antibalas and who we met at a Tibet House fundraiser back in February, also plays percussion. We feel like this song represents a new direction for us and made the most sense as an opening track of the record. We also were psyched to put this song out online for free ahead of the album.

This song started with an electronic beat Rostam made on his computer at some point in 2007 and sent out to all of us. Ezra wrote melody and lyrics, I came up with a bass line, CT came up with some drum parts and Rostam added guitar. We had a couple rehearsals in early January of 2008 right before our first album came out and we felt like it would be good to have a new song to play at the album release shows at Bowery Ballroom. It's an interesting song to play live because Rostam's programming is almost like this fifth musician in the mix.

This song is our tribute to Southern California ska-punk, especially Operation Ivy. They were a band I was definitely obsessed with in my teen years. One thing I like about this song is that the arrangement is pretty spare - mostly just guitar, bass and drums with a touch of piano in the bridge. We didn't really do anything like that on the first record.

One of our fastest songs, the speed of Ezra's vocal line is almost rap-like. I'm proudest of this song out of everything on Contra. It's only about two and a half minutes but I feel like we packed a lot of ideas into it - there's auto-tune on Ezra's voice, there's this cascading string part after the bridge, there's a four-part vocal harmony breakdown, and my all-time-favorite Chris Tomson drum fill at 2:14.

This song is our first ballad. That said, I feel like Rostam's drum programming on this song is atypical for a ballad. Ezra sings this song in a lower register. I think his voice sounds nice down there! Our friend Nat Baldwin played upright bass on this track. I've been taking lessons and am psyched to bust this one out on tour.

This song really came together in the first week of rehearsals in Greenpoint in January. The big breakthrough was the drum part CT wrote for the horn choruses - he's definitely alluding to a tradition of rock drumming there. It's one of the biggest sounding parts we've ever written. When we were setting up drum mics in Avatar in New York in February I had the pleasure of ripping into that drum part. Sometimes I wish I were a rock drummer!

This was a song that we were kicking around in soundchecks on tour last year. It started out with Ezra's guitar riff and then CT and I came up with a couple different grooves that worked with the chord progression. CT says my bassline on the verses is 'serpentine.' We recorded this song in Mexico City in Coyoacan at Tito from Molotov's studio this past March. At the time we had a photographer/friend Napoleon Habeica traveling with us - when we were working on it he told us that it was his favorite Vampire Weekend song. That definitely made me feel good.

'Giving up the Gun'

The first time I heard (a pretty different version of) this song was at a L'homme Run show in Lerner Hall, Columbia's student center, in the fall of 2005. Rostam came up on stage and sang along with the choruses. I think CT was playing bongo? It was fun! I remember we tried playing it together as a band in an early Vampire Weekend practice but felt it wasn't working and needed a different approach. This year we revisited it from a more studio/production perspective and wrote new parts. I'm personally proud of the bass part I wrote on this one--it's minimal but sing-songy, which is not the way I usually write.

This song is a lyrical collaboration between Rostam and Ezra. It also has our first use of a sample - 'Hussel' by M.I.A. There's also an interpolation of Toots & the Maytals' 'Pressure Drop'. This song has a couple abrupt tempo changes and is our longest at six minutes - kinda proggy!

'I Think UR A Contra'

Our second ballad! We actually came up with the title for the album before writing the song. A lot of this song is played on Rostam's VSS keyboard - you get noises by singing into it and having it map your voice across the keys. The string part that Rostam wrote for the bridge of this song is my favorite thing he's written for the band.