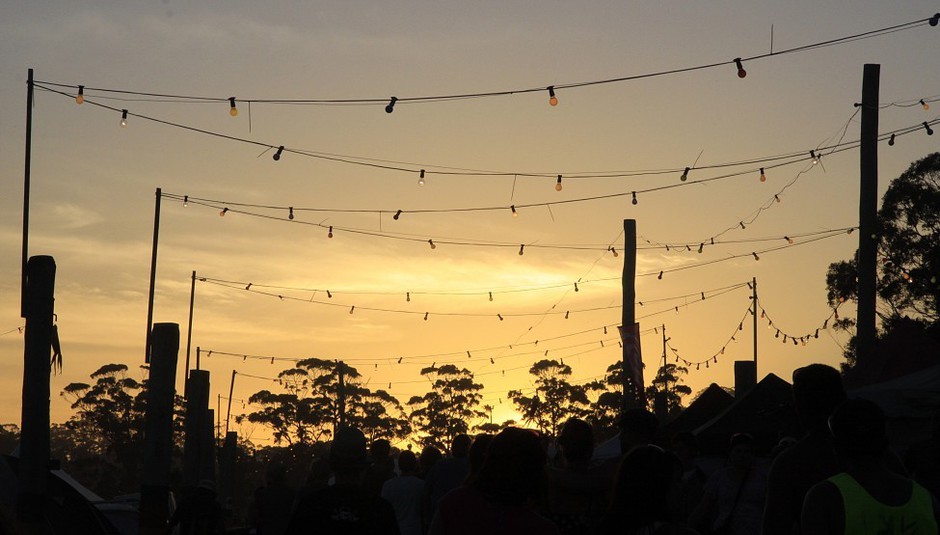 Melbourne has it all: four seasons in a day (including “laser sun” that’ll fry you to a crisp in 30 minutes, cloud or no cloud), the incredible Scienceworks museum (interactivity taken to a whole new plateau), a live scene wherein Yeah Yeah Yeahs, Grizzly Bear, Micachu and the stripped-back, Dick Dale-esque Super Wild Horses play on concurrent nights… and, a couple of hours drive away, the jaw-dropping scenery of the Great Ocean Road (where the Falls Festival takes place annually).

The Falls is as wonderful as last year. We don’t make it down to the near-mythical Village this time – where shenanigans and strange mystical beasts can be caught pacing through the night – and torrential rain coinciding with the start of Jamie T & The Pacemakers’ sarcastic, urban set sees us scuttling for cover by the carousel, thereby refusing us a glimpse of the equally near-mythical “parade”, wherein the arcane comes to live and giant straw men are set alight once more.

The realities of having two young kids mean we fail to last the course on the Tuesday and catch Wolfmother doing their best Led Zeppelin/Black Sabbath impressions – hey, there was nothing wrong with it when Soundgarden did it 20 years back, and there’s nothing wrong with it now. We fail to beat the sun on the Wednesday, and bail out before Yeah Yeah Yeahs do their whole Yeah Yeah Yeah thing, which saddens us greatly. And the rain kills us on the Thursday (New Year’s Eve) and so we miss the Mexican flamenco fire of Rodrigo Y Gabriela and the crazed good time of the Hilltop Hoods.

Tuesday affords us of our first live sighting of the charming Sarah Blasko – slightly overwhelmed by the six musicians thumping out an indie beat on violins and keyboards. Blasko comes as sharp relief to the hordes of sweaty, unkempt, Australian Alpha Males grunging the good grunge all around her, rocking the Julie Andrews look in sensible shoes and high-collared black dress with long vibrant strips of colour down the front. (I wouldn’t normally comment on a lady’s attire: Blasko, however, clearly gives thought to her stage presence.) She dances like you’d imagine a Victorian china doll would, minus the preciousness. Her song ‘Hold On My Heart’ is magical, delirious. The backing on ‘Turning Back’ is one part Dr Who, another part Eleni Mandell. There’s a stand-up bass, the mood is vaguely sea shanty. It’s a little bit early Cardigans (it feels delightfully Mod), a little bit latter-day Björk (Blasko can clearly control her voice)… and is that a slight Irish inflection I hear? Songs are deceptively lightweight, detached. All of this is viewed from a sumptuous balcony, side of stage.

“You doing alright?” she asks. Cheers come in response. “It’s a traditional festival question,” she explains. At last! Someone that doesn’t push it “to the max”!

Elsewhere, there’s Seasick Steve. Isn’t there always? His one trick – the single foot stomp box – is a great one, but one that probably only needs to be seen once. Not that you’d know it from the response he’s getting. He takes a slug of JD. He’s cheered to the rafters. He takes another slug of JD. He’s cheered to the rafters again. He uses the crowd response for percussion – another neat trick – and does the whole minimal guitar solo thing. He recounts a tale about how you should never go West when you should be heading South and is cheered to the rafters again. Now, here’s a man who understands how to work his audience!

Earlier, The Vasco Era come out, play a thoroughly spirited barefoot version of that old rock perennial, The Beatles’ ‘Why Don’t We Do It In The Road’, the jocks in the crowd having a thoroughly good, bruising time, sound like a cross between Jet and someone good (The Drones, say), plenty of noise and testosterone, kick a couple of water bottles over, and then… become shit. The set ends with a bowel-clenching terrible version of ‘Fools Rush In’. Not that we’re paying attention. We too busy sheltering from the insane sun, and trying to divert our four-year-old son Isaac from stealing all the chocolate Freddos from the media caravan backstage. Here are some of the other acts from the first day in their full one-line glory:

White Rabbits are the highlight of the Wednesday, easy. Ignore the music on their MySpace page (like a mishmash of Vampire Weekend and Adam & The Ants, but nowhere near as interesting as that sounds) and catch them live. On stage, these New Yorkers are an intoxicating swirl of Spacemen 3-style psychedelia, noise and two, sometimes three, stand-up drummers beating out a tribal call-to-arms, raising the crowd to a frenzy: sometimes reminiscent of crazed noise-heads Oneida. They should quit reading Pitchfork and concentrate on the noise.

Dan Sultan is horrible corporate indie rock… if they ever held an American Idol for Jimmy Barnes fans… but everyone is in the Grand Theatre anyway, watching Icelandic singer Emiliana Torrini swirling and charming and skittering and whirling a cloak of mesmeric proportions over the enclosure. Isaac clutches close, and waltzes.

For sure, Torrini is worth further investigation.

Kaki King talks about hating on Adelaide while the entire world and its dog flocks to the main stage to see The Temper Trap do their whole prodigal son bit. It works a treat, every time. Move away from Australia for a year, get some overseas attention and return as homecoming heroes. Folksy, with an all-black guitar and too-loud drums, while a third member blows down a melodica we can’t hear… um, I’m talking about Kaki here, not the Trap. Sorry. Got my notes mixed up for a second.

‘Sweet Disposition’ starts up, and the crowd go absolutely, undeniably, 100 per cent certified, ape-shit. “Oh shit,” goes singer Dougy, but I have no idea why as the song is clearly a ‘New Year’s Day’ for the 10s.

The View: terrible Scottish indie who go on and on and on.

Grizzly Bear and Editors: as expected.

Oh wait… you were expecting more on the latter? Well, I prefer to listen to The Beach Boys without the CD skipping every few seconds… and I never liked Bauhaus that much in the first place. Their most popular song was a terrible version of a David Bowie hit, and The Birthday Party pissed all over them – metaphorically only, sadly – from a great height. There was a full moon over Editors. There. I’ve pointed out the highlight of their set. And the next person to erroneously compare this Interpol lite to Joy Division will get my well-worn copy of Unknown Pleasures rammed down their fucking throat. There’s NO SIMILARITIES AT ALL except two singers who sing low and (hem) Gothic.

On the third day, I’m way too sun-frazzled to deal with anything.

The mischievous Art Vs Science are hilarious and ace in a Kid Koala/Daft Punk way. Little Birdy proves there’s still a place for old-fashioned rock chicks. Me? I’m crunched in a sodden heap in a corner of the food tent as Isaac takes on all-comers at checkers.