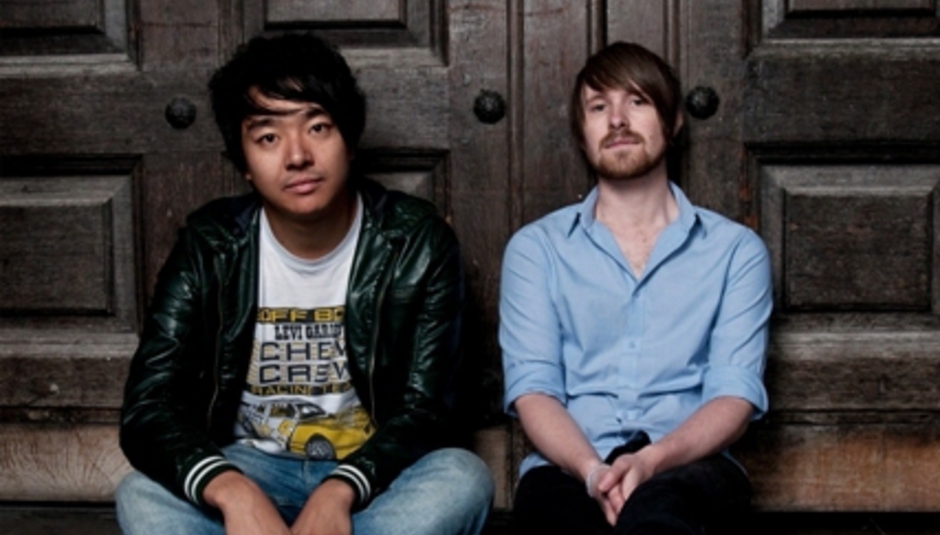 Invada Invasion of DiS: the return of F^ck Buttons

Invada Invasion of DiS: the return of F^ck Buttons

We round off the Invada Invasion of DiS with a chat with Andy Hung, one half of the mighty Fuck Buttons (Benjamin John Power having swanned off on holiday). As Geoff Barrow discussed on Monday, the erstwhile Bristolians are signatories to ATP rather than Invada, but they’re taking pride of place at tomorrow’s Invada Invasion gig, topping off the second stage bill as they break out the divine accelerations of new record Tarot Sport (out Oct 5).

DiS: It’s pretty rare these days for an act to put out two records in consecutive years and tour as much as you, yeah – were you forcing yourselves to soldier on with Tarot Sport at all?

AH: Yeah that cycle exists, it’s the classical way of doing it... but we are interested in having that space, to digest everything that we’ve learned already, not rush straight in.

We toured Street Horrrsing for a long time but it was important for us to write whenever we could, but it doesn’t really seem...

DiS: Yeah, didn’t you say you weren’t going to do any gigs before the album came out? But then you did ATP...

AH: We were committed to writing, so we didn’t take any gigs until we could see the horizon and we’d made a bunch of music we were happy with. But then the ATP show was right at that precise moment when we thought “I think we’ve got an album here”.

DiS: Are you allowed to say no to ATP?

AH: To not do shows? DiS: Is it fair to call Tarot Sport a dance record?

AH: I wouldn’t say it’s a dance record, though I would say it has dance elements to it, sure.

DiS: Do you have any way of thinking of it generically, then? It’s patently not a noise record, which I suppose is how people were happy enough defining Street Horrrsing.

AH: [long pause] I don’t know. The noisy element from the last record are continued through into this record but they’ve been expanded, but I guess without that providence you can’t categorise it as noise or whatever; I guess there are a lot of elements, I’m not really sure.

DiS: Is it a record that you wrote with the intent that it can be danced to?

AH: No, I don’t think so - we don’t really have any aesthetic intentions when we start writing, that’s not the way we work.

DiS: But it is unquestionably faster, more electronic music...

AH: Um, from what I understand of dance genres, it’s to do with the type of beats, the rhythm of the beats and the structure of them, but for me I find it really difficult to discern the difference between techno and trance and house. From what I can discern – and I’m new to that type of music – from what I can discern techno has handclaps and house has snaredrums. But I can’t tell, because there are some techno songs that are pretty slow, it could be a house beat, I don’t really know what the parameters of dance music and genres are, to be able to slot it in anywhere, and that’s probably to our benefit.

DiS: Could you even point at an impetus for the changes in your music?

AH: I guess our equipment is constantly changing, it’s giving us more of a sense of possibility than before. Like those drum loops are all live loops, so I’m not sure it was physically possible for us before, but now we’re generating different possibilities, maybe that’s the reason for the change in aesthetic. Since we’ve started doing this full time now we’ve collected a lot more stuff and we’ve branched out into – I was going to say more expensive stuff, but the stuff we used to play with coast about 50p from car boot sales. So we've started using keyboards that are more expensive, though in the general realm of instruments they’re still cheap as chips.

DiS: But you still pick stuff up from the car boots?

DiS: Is it actually common to find something good?

AH: I haven’t assessed wither I’m a hoarder or not, but I probably am, it’s getting out of control. I think with regards to how we play those instruments it is actually really fun to test our sensibilities, to test our tastes. Because all these things which we have no prior knowledge of, we don’t know how it works, we just play it, and if we both enjoy the sound we just go with it and that’s the fun of the whole process.

DiS: Do you think a certain naivety is key to what you do?

DiS: Why did you decide to ditch the vocals?

AH: There were songs that were going to be on the album that would have had vocals, but they just didn’t make it; with regards to the whole album not having vocals, it wasn’t intentional.

DiS: To what extent was the record pre-formed before you went into the studio? You’d definitely been playing ‘Rough Steez’ for a while and ‘Flight of the Feathered Serpent’ was pretty much your set closer for all of 2008...

AH: Um [pause]. Without wanting to sound too abstract... the vision of the album remained intact from beginning to end, and what Andrew [Weatherall, producer] was available to do was be sensitive to that, and to embellish and pronounced the aesthetic. But we prepared really stringently, just because of time restraints, we nailed all the transitions and placings of the tracks, fine tuning endings and beginning to fit in with each other before we got into the studio.

DiS: Yeah, if anything it feel more symphonic than Street Horrrsing, sort of built around these three highs of ‘Surf Solar’, ‘The Lesbon Maru’-‘Olympians’ and ‘Space Mountain’-‘Flight of the Feathered Serpent’.

AH: That’s how I see it. Without intention, after we’d recorded it the album reads like a film three acts.

DiS: When did you first encounter Andrew Weatherall?

AH: He was friends with [FB manager] Declan and we were looking for remixers and Andrew’s was just perfect.

DiS: That was ‘Sweet Love For Planet Earth’?

AH: Yeah, I really liked that track and we were definitely drawn to Andrew, we thought he had a really good understanding of what we wanted to do. I really enjoyed the time we spent with Andrew. He really has seen it all – the conversations you have with him... like, I think his ethos was extremely confirming... he is older than us, and just seeing where that ethos have taken him was really inspiring.

DiS: I’ve heard you say the sessions were pretty intense...

AH: Yeah, the studio time was really intense. It was really intense because there were three people - Andrew, Ben and I - contributing ideas all the time, and the days were long. So I mean it wasn’t like if you were in the classroom you could just look out of the window, you were continually conscious of having to present your ideas and articulate them and articulate each other’s as well. Andrew’s first job was as a bricklayer, and he says he’s never been as exhausted as that until now. It was just really involved, the most involved relationship I’ve ever been in. Every night you’d fall asleep like a baby, it was just the best time for satisfaction. I dunno it sounds cheesy, the way we worked as a team was incredible.

DiS: Are you going to be able to mix your sets up a bit more now?

DiS: Did touring a more or less identical set for two years grind you down a bit?

AH: Um, I think yeah, if you do anything for too long it’ll drive you crazy and there were times we felt it was difficult on the road. We played a lot of shows last year, I don’t think a lot of people would be able to do that.

DiS: Now that you’ve got two hours of material, would you do an hour-and-a-half/two-hour show? That’s be pretty knackering given you don’t actually stop playing...

AH: Wow. You know. I haven’t even thought about – haven’t even ENTERTAINED the idea of playing for two hours. Yeah. I guess that’s... interesting.

DiS: So the Invada Invasion... did you know Geoff from Bristol? Did you ever flirt with signing to Invada?

AH: No, we met Geoff at the Portishead ATP.

DiS: People are always calling you a Bristol band; is that how you see yourselves?

AH: We don’t at all. I mean yeah, the band started in Bristol but I don’t think we have any geographical attachment to it, I don’t think... yeah... but we really enjoyed our time in Bristol, and it really contributed to the way we evolved.

DiS: You’ve had a pretty good couple of years; do you have any ambitions about where this is all going? I mean, Mogwai are headlining the Invasion, you think you could be that big?

AH: We’re really enjoying making music, but in terms of social position, I don’t think I worry about that at all.

DiS: Do they play you on the radio?

AH: I think they have done, they call us Eff Buttons

DiS: What do your parents think?

AH: I really want to them to come to the show at Heaven in October because they don’t quite stand my world and I really wanna show them what we do.

DiS: Yeah, but what do they think about the band name?

AH: Ha, they definitely don’t understand it. How can something you put a swear word in be a way of making a living?