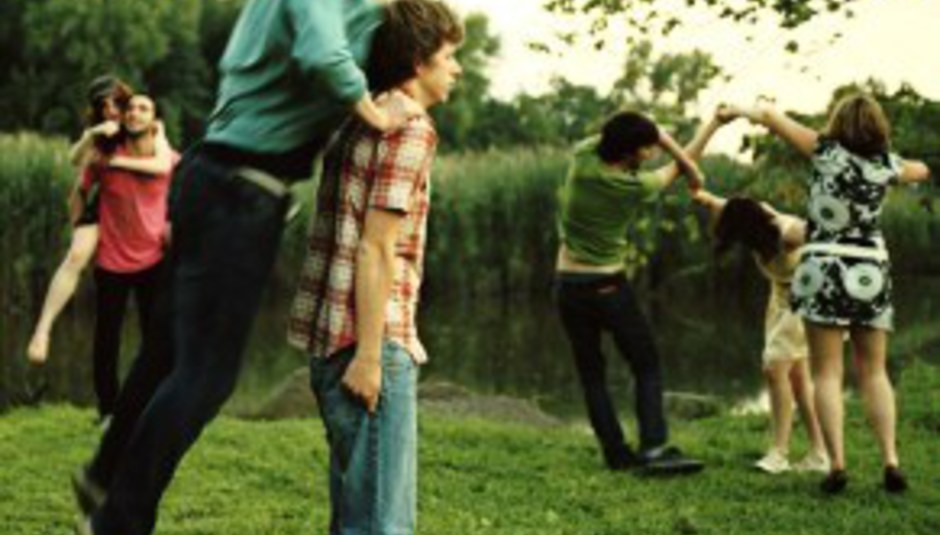 With their debut album Hold On Now, Youngster released via Wichita this Monday, February 25, DiS invited Los Campesinos!’ own Gareth Campesinos! to dissect the new record for the reading pleasure of you lot, many of whom have already ripped the record from the ‘net already, no doubt.

You can read the DiS assessment of Hold On Now, Youngster HERE, either before or after Gareth’s personal run through of select tracks’ lyrical influences and concepts.

Some Notes on Selected Tracks from _Hold On Now, Youngster...

Hello DrownedinSound, these are some notes on the lyrics of some of the songs off our album. Not all of the songs, because some of the older ones I can't really remember what I was going on about when I wrote the words, and one of them would have just read "dancing", which is really obvious, and doesn't really give an insight into my massive intellect.

This is a song about a long-distance relationship which I had, and the negative feelings that began to come as the relationship reached its close, as nothing seems to be good enough for each other and the end is clearly in sight. When the happy anticipation of seeing my then girlfriend had been replaced by the fear of a difficult weekend. The night previous to one such visit I had a dream that I was a deer. The next day, en route to her house, I saw a dead deer in the side of the road. Pretty deep, huh?

‘My Year In Lists’

The first verse of this is kind of a continuation of ‘…Doe Eyes’. It mentions living a love life through Royal Mail and how these methods of communication can drain anything of context, which obviously makes things problematic. It's also about how much I hate the New Year and how people react to it. I don't believe in New Year’s Resolutions. I believe in changing things when they need to be changed.

A story based on my experiences of the United Sounds of ATP festival, weekend two. I met a really great person that I spent most of the Sunday with. We started speaking because of the band t-shirt I was wearing, which is pretty much the ideal 'in' I think. Basically the gist of it is once we'd both left the festival, I found out she had a boyfriend, and hadn't mentioned it. Which made me feel awful, and got me thinking that so long as I value people according to what bands they like I am making myself expendable. Because there will always be somebody who likes the same bands as me, but is vastly more attractive or can drive or is a less fussy eater.

The title is ripped off from the Camera Obscura song, 'Knee Deep At The NPL', because one of the conversations I remember hearing her have was about that song, and my friend Pete's suggestion that it didn't exist.

Naturally she was right.

‘This is How You Spell, "HAHAHA, We Destroyed The Hopes And Dreams of a Generation of Faux-Romantics"’

Living my life through the internet, as I do, I'm aware of a lot of people who behave like the female character in this song. It's about my annoyance at the type of person who paints his or herself as a lost soul, or a poet, and spends their time cultivating a faux air of feyness or vulnerability which is essentially a method of seduction.

The narrator in this is the male character from_ 'The International Tweexcore Underground'_, getting his shit together and dumping his annoying, posh girlfriend.

I know it's a stupidly long title, but it acts as a good test to see which people are morons, depending on whether they reference it as being 'Fall Out Boy-esque' or 'Ballboy or Ten Grand-esque'.

I like doing spoken word bits because then I'm not even pretending I think I can sing.

‘We Are All Accelerated Readers’

I think this is a dismissal of any suggestion of love. An attempted rallying cry for the lonely, because records and books and... well, not films, because films are rubbish, but things like that are far more dependable than any notion of a life partner. I hate meeting couples that make me feel like the only reason they're together is because it's easier that way, and because they can't bear to be alone.

‘...And We Exhale And Roll Our Eyes In Unison’

A song about misogyny and sexism within the mainstream music press and amongst all too many music fans. About Sheryl Crow going on_ This Morning_, and Eamonn Holmes saying it's surprising to see a girl with a guitar. About awful boys congratulating female band members on being attractive, rather than the fact that they're shit hot musicians. About lagered-up dullards at gigs attempting football chants. About how there's no point in trying to speak to the masses, because the masses know nothing.

Thinking about someone, when you know they're not thinking about you. The end of a crush. Another song about mixx-tapes.

Los Campesinos!’ debut album, Hold On Now, Youngster, is released on Monday, February 25. Read up on recent Los Camp! content on DiS by clicking to this tour diary and this interview. The album itself, if you missed the earlier link, is reviewed here. Order it on Amazon here.

Find the seven-piece on MySpace here, where information on tours and stuff can be yours to digest.