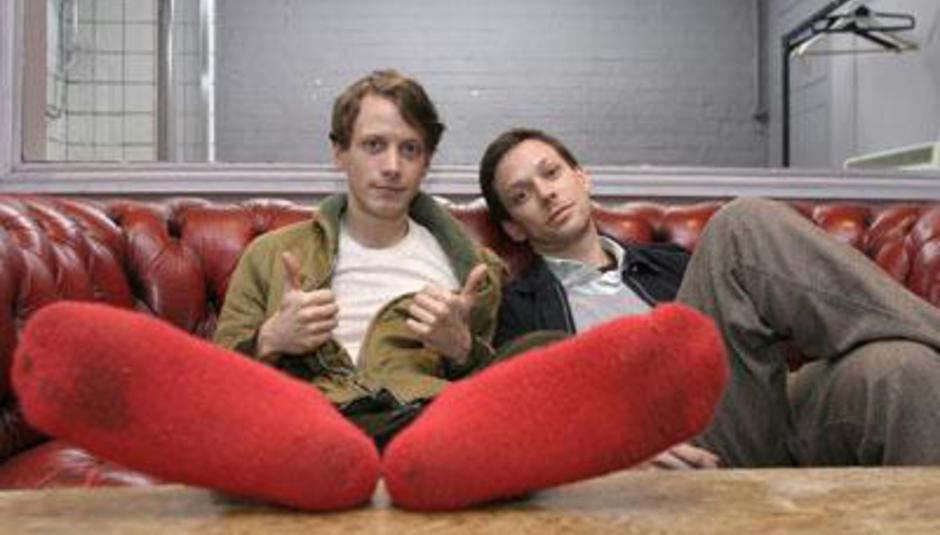 Siblings Yan and Hamilton seem quite a timid pair as they sit side-by-side contemplating questions in a dressing room before their gig at the London Forum. In fact, the only boldness to come out of them today is young Hamilton’s brazen scarlet socks which he proudly displays as he rests his feet on the table in front of him. Truth be told, it seems they are conserving their energy for tonight’s show. After all, it’s widely known British Sea Power are hardly bashful when it comes to their live performances. From glary-eyed tambourine bashing on their body parts and swinging off ceiling beams to impulsive crowd surfing during their sets, each show is imparted with fascinating savage gymnastics. Still, it does mean they are prone to injuries now and then. “I’m feeling a bit bruised since we have been on tour,” mumbles singer and guitarist Yan with a faint Cumbrian accent.

Bruised is probably an understatement. It wouldn’t be surprising if they have sustained the odd dislocation or broken limb given their track record. And yet, these antics have left them with such tender memories, as Yan recounts guitarist Noble’s (otherwise fondly known as Nobby) recent brush with death. “He did a really interesting style on one of his dives in Birmingham which was kind of special. It was this full-on run-up to the bottom of the stage; jump on a box followed by a leap into the audience with his arms behind him, like he was a rocket man or something. And he did four of them without dying,” he says with excited admiration.

Since 2001 Yan and Hamilton along with the rest of their comrades Noble, Wood (drums) and Eamon (keyboards/ bass drum) have set sail on a nautical crusade against mediocrity in music. While donning a nostalgic militant look with old navy uniform jackets, sharing a love of literature and Czech architecture as well an avant garde sound - many were baffled by their sheer absurdity to follow no one’s rules but their own. A record company exec who had seen them live when they first started out, laughed them off as the “worst fucking band in the country”. But their courage and self- belief soon won over a cult following giving them so much more than the measly last chuckle. With their own residency night in Brighton called Club Sea Power and theatrical performances, it wasn’t long before they were poached by Rough Trade, who was able to recognise the genius to their madness. And it wasn’t just the indie nerds who doted on them either. The release of their 2003 debut album, The Decline of British Sea Power, soon found a special place in the heart of a random list of celebrities, which includes, REM,Lou Reed, Jeremy Vine,Bill Oddie,Damien Hurst, Julian Cope and Jarvis Cocker. For the boys they find it all a bit overwhelming. “The fact that any of them like our music is pretty amazing,” says Hamilton full of sparkle smiles.

Having received such high critical acclaim for the first album, it would be expected the pressure building up to making the follow-up, Open Season, was probably as pleasurable as an elephant standing on your big toe. But if you’re BSP, you don’t really have sleepless nights about whether your next album is going to bomb. Instead you retreat to somewhere remote in the freezing cold and become motivated by the weather. “I was inspired by snow while writing this record as we started working on it in a holiday hut in January last year and there was a lot of it in the Sussex downs,” remembers Yan.

He’s right there. While O Larsen B is a love song to the collapse of an ice shelf in the Antarctic from the effects of global warming, Victorian Ice looks at the cold- hearted nature of people, making Open Season the ultimate glacial experience. But frosty weather aside, Open Season also explores a more mature depth to their writing. Tracks like Be Gone give insight into Yan’s imagination after he penned it about a dream he had with Joan Baez singing to him in the style of Kurt Cobain. Hamilton’s offering the Land Beyond is a beautifully crafted piece with the added extravagance of a viola. And True Adventures is laced with a storming epic glow encased with pounding kettledrums and chirping seagulls. With this winning formula, it plunged in at number 8 in the UK album charts and has been lauded as one of the best records to come out this year. Needless to say they are quite chuffed with it. “You can’t really complain. It’s a four and a half star record. It’s nice to see reviews where people use their imagination and let the record take them somewhere poetic,” says Hamilton.
“We got album of the month in Glamour magazine. It’s better than being in a boy’s magazine. I like girls. I like boys as well but I prefer girls,” sniggers Yan in pre-pubescent manner.

With such boyish charms they could quite possibly be the Peter Pan’s of rock. While most bands brag about their hedonistic exploits, BSP are far more interested in the simple things that give them innocent fun. These days they prefer long hiking socks over their trousers and thrive on brisk rambling excursions whenever they get the opportunity. Hamilton takes it to another level with an endearing story about a dog, who lost all bladder control whenever he was around them. “One of my most memorable moments has to be getting pissed on by a little Italian greyhound while making the record. I think it pretty much pissed on all of us. He was so friendly, he would pee on you and then give you a smile,” he says.
“It was a cute dog, so it was ok,” adds Yan, quick to defends its honour. To mark that very moment, the dog has a special feature on the song To Get To Sleep.

Animal loving comes with the territory. It’s no secret they enjoy getting out binoculars for a glimpse of an ornithological rarity. And the recent top 20 single, It Ended On An Oily Stage, gives plenty of exposure to this with black and white wildlife footage in the video. But the big question remains, why is there a naked man riding a horse? “He’s about 100- years-old that man. God knows what’s going through his mind. I think he’s just being told what to do. But he just looks pretty funny to me,” says Hamilton with a perplexed giggle.
“Better than going to your average gig I reckon,” adds Yan.

The second single to be released is Please Stand Up and hones in on their love of pastoral life. Written by Yan, the song was recorded in Wales and is about feeling homesick for the country after too much exposure to the world of motorways and cities. “We grew up in the Lake District and most of our time was spent exploring. It’s something that has helped develop a great imagination. These days we get less time to ourselves, as we have to do a lot more work, but we do have a lot more to smile about,” explains Hamilton.

Still this hasn’t stopped them keeping a part of themselves at home. Just before Christmas last year they decided to do festive fundraising show in Noble’s hometown in Leeds. The event was in aid of MHA (Methodist Homes for the Aged) who provides dementia care and sheltered housing for more than 5,000 men and women in Britain. Noble’s father, David Noble, is involved with the organisation regionally, who hope to build a day care centre in the local community. The band was also generous enough to auction off Eamon’s helmet to raise money. “It was on the news, Nobby’s Dad was on and it said rock stars dad underneath which was amusing,” says Hamilton delighted with whole event.

The new album also means a new season of stage props. Gone are the plush pieces of forestry with stuffed birds on stage. Replacing it is a wicker dear, who receives a euphoric lynching at the end of tonight’s show and disintegrates into pieces of twigs dotted around the audience. It’s quite minimal to what were used to from the usual stage scenery, but Yan explains it’s not the last we’ll see of the foliage. “I quite miss the trees actually. We might bring them back now and again.”

They may have bid farewell to their greenage days but they have no intention of breaking their tradition of playing some of the oddest places. Past venues include village halls, caves, bunkers, and community centres and there has been talk of them doing a show on an oil rig. You name it, if they haven’t already given it a go, then you can be sure it’s on their checklist. “It’s not good for your health to do just these venues otherwise you just go insane. Besides, they like it more in the funny places. There’s more enthusiasm because it’s a rarer thing and people don’t take it for granted,” says Yan.
“It just makes a change really. It’s like a little holiday and you get more strange people visit,” agrees Hamilton.

Undoubtedly this has contributed to their reputation for being eccentric, opening the door to more quirky avid fans. But it’s quite clear BSP are always up for the challenge. “Our fans don’t really ask much to be honest. They should be more demanding because we’d probably do it,” sighs Yan looking slightly disappointed. “Personally I’d love it if some of them asked me for a tickle.”

What a novel thought? But given their passion and vision, BSP are hardly a novelty band. With boundless enthusiasm, there is no stopping them except for one thing. “I don’t think we’re that ground breaking really,” says Yan pensively. “But I hope there isn’t a band that sounds like us in ten years, otherwise we’d just kill it off.”