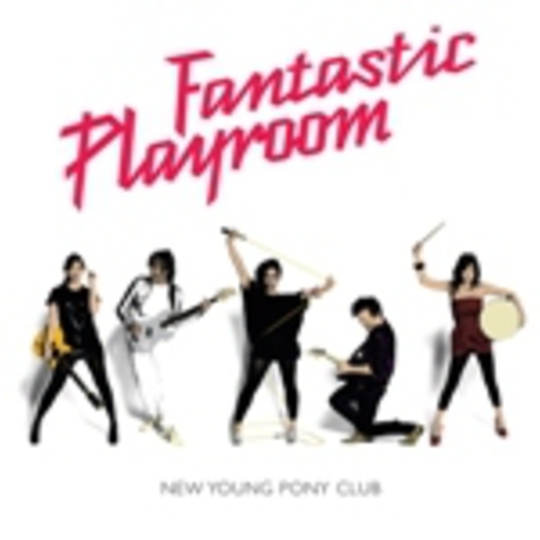 Bundling electro, punk and funk references both fair and foul into a slick pop package, much has been made of New Young Pony Club resemblance to ESG’s primitive bass-driven trip, but somewhat less coolly they also occasionally resemble Salt ‘N’ Pepa quasi-rapping filth over a latter-day Kylie record. Well, I say that’s not cool but... They probably dream of penning the kind of eccentric indie-funk crossover Dee-lite scored with ‘Groove Is In The Heart’, only with punkier credentials. But ultimately lack the chops.

On their frankly overdue debut, a lot will depend on your take on Tahita Bulmer’s scene-stealing vocals, whose coolly hectoring tones will doubtless annoy some. Taking her cues from the likes of Peaches and Romeo Void’s Deborah Iyall, much of the music on Fantastic Playroom stands and falls on her smart-mouthed scenester drawl, given a dry-hump vocal production that allows her to get close enough for you to feel the suspicious-smelling breath on your face. Whether she’s inviting you to dip your dipper or spouting clever-clogs nonsense along the lines of ”flicking off the stereotypes, the nefario-types, the candy sheriffs of hype and co-co-codamol”, Bulmer’s a is a cooler-than-thou shtick that’ll either leave you pleading for more at the end of her dominatrix whip, or just wanting to whip the bint silly. Even her name sounds like a trendy eating disorder.

As for the music, you’ve probably heard it before – ‘Get Lucky’ is fine, funky synth-pop with aloof, Numan-esque electronic textures. ‘Ice Cream’ remains a sticky, cartoonish delight but suffers from being dulled by over-familiarity. And ‘Jerk Me’ is a lop-sided, stuttering groove buoyed by New Order-style burbling synth and disco-popping bass.

After the sass and bluster of the first half, the record settles into a rather one-dimensional groove, hoping the listener’s critical faculties have at this point been so bludgeoned into submission by the series of smack-down floor-fillers that precede it that they fail to notice the same trite formulas being played out ad nauseam. Which is wishful thinking, of course. Of a clutch of just three – three! – tracks which haven’t already been released on one format or another, only ‘Fan’ stands up to previous material, a skulking, hypnotic groove with a pornographic bass-line. ‘Tight Fit’ is the kind of makeweight disco fodder that makes up the uninteresting 99% of Madonna’s career, while 'Talking, Talking’ aims at cool but ends up anonymous and pedestrian-sounding.

By all means think of New Young Pony Club as a disposable commodity that’ll wilt like ice cream in the midday sun, but this is a kinky bit of fluff whose only obvious flaw is a lack of decent new material. Which is fine if you swear by the one about leaving ‘em wanting more, but for the rest of us just seems like a bit of a pricktease.