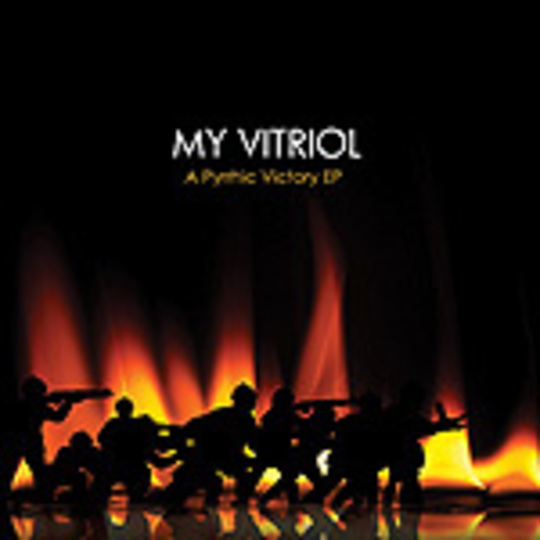 And so they return, just over four years after Som Wardner pressed pause on My Vitriol's rise when it looked to all and sundry like they were on the cusp of bigger things. Since the initialisation of their hiatus, the musical landscape has changed quite drastically.

Now, there are just as many guitar-slingers as there are pop kewpie dolls battling for prominence in the charts. The only constant – luckily for Wardner and band – is that the My Vitriol cult has remained both faithful and large in number (as was evidenced as their gig at KOKO last year). Still, My Vitriol were far from universally beloved at their peak, and there are just as many people who'd love to watch them fall and splatter in a pile of blood and eyeliner as there are celebrating their return. So, it’s perhaps needless to state that there's a lot riding on their new single.

But, what a huge single it is: track one of four, 'War Of The Worlds', is a bright, brutal jewel of a song, which is near impossible to dislodge from your head after a couple of listens. The ocean-sized verses and taut, tension-packed guitar lines make you instinctively reach for the volume knob; instinct screams that this sucker should be played as loud, and as often, as possible. It’s the kind of song that makes you desperate to attend a concert to see it played without the studio veneer – even if you had no time for My Vitriol to begin with – just to see if the heavier sections of the track are actually capable of demolishing parts of the venue.

After such a dramatic opening, the remaining three tracks can't help but come up short. 'Lord Knows How I've Tried' is a pleasant and haunting ballad, although it does veer slightly towards the mawkish, and while the cover of Martika's 'Toy Soldiers' raises a smile, it's not exactly ground-breaking. The remix of the lead track, 'ElectroWar', is a stronger outing and sounds like what might have happened if Tweaker had been brought in at the dials.

In the end, though, singles should showcase a band putting their best foot forward, and this respect the A Pyrrhic Victory EP succeeds admirably. If the rest of the tracks on the band’s as-yet-untitled forthcoming album live up to the standard set by 'War Of The Worlds', then it may prove to be worth the four-year wait.