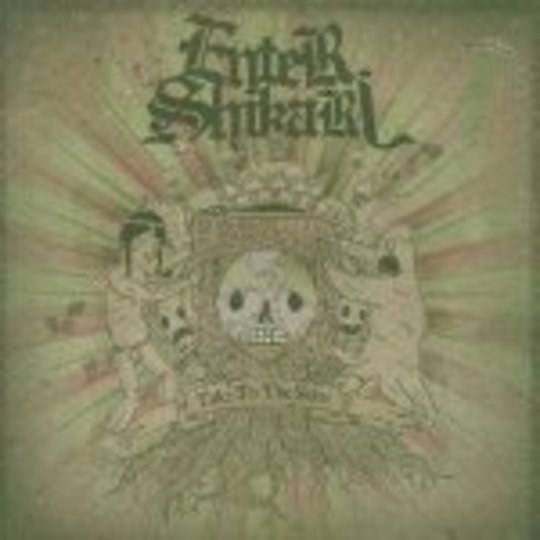 It begins with a shrill “SHIT!” and a choir of screams, but the thrill doesn’t last: like riding even the most knuckle-whitening of rollercoasters, Enter Shikari’s much-anticipated debut album reveals itself as a wholly one-dimensional listen as early as the third or fourth song, the equivalent of the third or fourth time around said stomach-turning sequence of twisters, given that the structural schematics of each of these 17 tracks are depressingly formulaic.

The Enter Shikari songwriting rule book extends to three essential tick ‘em off points: one, play your guitars fast and crunchy; two, intersperse your singing with throat-shredding growls a la all those post-hardcore sound-alike acts of however many years ago; and three, chuck a load of cheap synthesizer beats over the top of everything under the mistaken impression that you’re turning a paint-by-numbers piece into a priceless Jackson Pollock. If you’ve heard either download-only single ‘Mothership’ or the recently released ‘Anything Can Happen In The Next Half Hour’ (reworked from the band’s much-pimped demo of 2004 – DiS has a couple of copies and is taking offers), then you’ve heard everything this album has to offer.

Although the album’s sleeve implies there are 17 songs here, six of them are simple electronic interludes/intros/outros; of the verse-chorus-verse offerings, ‘Labyrinth’ is a cheesy Euro-pop backing track shafted by the most elementary of amplified six-string workouts, complemented of course by sweet ‘n’ sour vocals (think Busted collaborating with Poison The Well); ‘Return To Energiser’ begins charmingly chaotically but ultimately slips into the band’s all-too-obvious comfort zone once the keys make their presence known; and ‘OK, Time For Time B’, the album’s almost-closer, is the soundtrack from Turbo Outrun (or some other car driving game of old – DiS’s memory is a little misty these days) mangled by a Funeral For A Friend covers band. These are the highlights, if you choose to classify them as such.

There’s a lyrical apology proffered the dissatisfied listener’s way on the aforementioned final song proper: “We’ve tried to communicate, but we’ve got no patience”. Perhaps if Enter Shikari had taken their time a little with this D.I.Y. release – you’d have thought, without a label calling them at the studio five times a week, they’d have worked at their own pace and without too much pressure to rush-release this LP – they’d have produced a debut worthy of their current profile, a profile founded upon their alleged rewriting of the rock rule book in the wake of crossover success for Klaxons and their dance-rock associates. But they’ve failed to even produce a good album, let alone one that sets a precedent for would-be peers to aim for. Refused, Botch, The Rise: many, many bands spliced hardcore with electronic beats before Enter Shikari, all with greater success, albeit not success of a commercial nature.

One can only hope that Take To The Skies acts as a bridge record for its teenage audience and ultimately introduces inquisitive ears to Enter Shikari’s more-competent, more-satisfying forefathers. While the four-piece’s decision to stay independent for their debut long-player is worthy of a hearty back-slap, no positives can be penned regarding their woeful on-record ostracising of credibility. Live, before a pit full of laser-waving mini-moshers, these songs might make sense; on a cold compact disc they’re merely poorly realised reinterpretations of the work of historical heavyweights unworthy of the slightest attention from anyone who understands the definition of discerning.