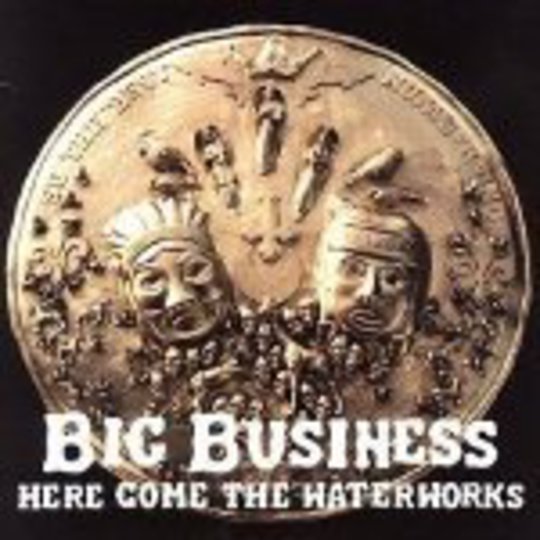 Although well known these days for their collaborating with/joining of The Melvins, Los Angeles-based (but Seattle-born) duo Big Business have enough trump cards in their back catalogue to warrant ample praising of their talents when shorn of Buzz ‘n’ Dale.

Here Come The Waterworks is the pair’s second LP following 2005’s well-received Head For The Shallow debut, also on Hydra Head; unlike many of their label of choice’s past releases, this eight-tracker never once wanders into waters classified as contemporary hardcore. Instead, Big Business’ forte is forceful, brutish ‘classic’ rock – i.e. you can nod yr head ‘til it falls from your shoulders, the vocals are clear and epic of tone, and the instrumentation, while powerful, is never disarmingly discordant. It _is_ classic.

In fact, it’s not so far removed from the work of The Melvins. Who’d have thought, really?

‘Another Fourth Of July’ showcases the duo’s ability to rein a song in and restrict its fistfuls of fuck-you aggression; with immense-sounding marching band drums echoing all around him, lyricist Jared Warren (the cleaner, crisper of the pair, vocally speaking, as drummer Coady Willis provides rather coarser contributions) opens his lungs and expels air enough to topple cloud-penetrating towerblocks. The song comprises a first-few-listens highlight, but returning to …Waterworks time after time only serves to reveal further standout moments of muscular fight-rock. There’s a soundtrack for every sort of mood here, for every journey, for every minute of the day. So long as your soundtrack of choice is of a rock persuasion.

Sludgy but never static, bombastic but never bowl-you-over terrifyingly so, …Waterworks is a fine addition to Big Business’ canon of work to date, and that includes their work with The Melvins. Although their own material is unlikely to ever be as revered as that of their bigger bandmates, …Waterworks proves that Willis and Warren are true powerhouses, and a collective force to be reckoned with. Impressive, ear-popping and bowels-rumbling stuff.