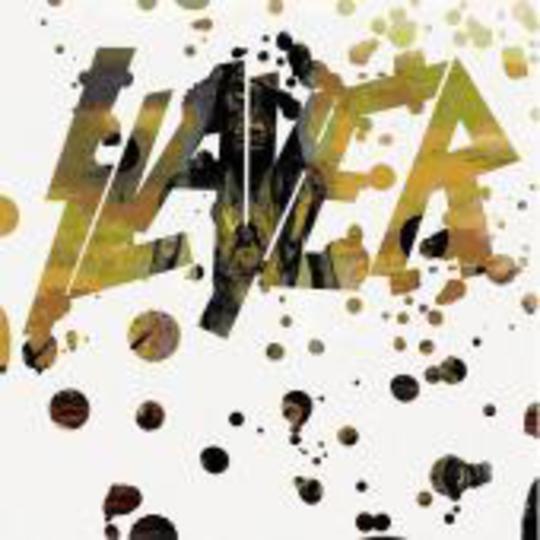 I’ll take the devil any day

On paper, 'traditional' metal is pretty amusing – a cursory flick through the booklet that accompanies Slayer’s latest long-player provides a good few giggles, the above quote from track three of ten ‘Skeleton Christ’ just one of many humorous lyrical passages. But that 'on paper' is an important qualifier: although the veteran Californian quartet pen words as fall-about-funny as the idea that their name stands for ‘Satan Laughs As You Eternally Rot’ (it doesn't, so stop it), when they’re spat by greying frontman Tom Araya – he’s the dad every metal fan wishes they had – they’re impossible to disbelieve. Yes, blood is raining downwards, you will see me burn alive, I will live in fear that death is back, and the shrapnel will burn when I pull the fuckin’ pin.

Slayer’s tenth studio album – their first since 2001’s God Hates Us All (hardly surprising when you’re screaming “Fuck your God, erase his name”; DiS review here) – has been met with mixed feelings by hardcore aficionados. Some have privately muttered that Christ Illusion isn’t a patch on its aforementioned predecessor, let alone the band’s much-revered 1986 effort Reign In Blood. What is universally welcomed is the presence of original drummer Dave Lombardo, who last appeared on 1990’s Seasons In The Abyss. It’s Lombardo that really drives these songs into the listener’s ear and out the other side, his kick drum work propelling Kerry King’s adventurous riffs (and Jeff Hanneman’s equally ridiculous(ly amazing) solos) forward at frightening velocities. In lesser hands, these songs would run the risk of blending into each other, homogenising into a 39-minute solid mass of repetitive riffs and chug-alike breakdowns. But Slayer, quite bleedingly obviously, know their shit: nobody does this sort of metal better.

Over-analysing each song would only lead to an article that contradicts its subject matter’s immediateness by running to a few thousand words – one could ponder over each instance of God-bashing and wonder if it isn’t just all show, but to think in such a sceptical fashion is to strip Slayer of the veil of supremacy they’ve established over the last decade-plus. They tower above many a peer in terms of technical ability, and so far as sheer power and aggression goes, no sprightly new kids on the block can match them pound for pound. Each crunch sounds as if it could level a skyscraper or cave in a subway, every cymbal crash like it could pop an ear drum like a pea pod from a thousand miles away. As ‘Supremist’ screeches, literally, to its conclusion, the average listener is likely to be rendered speechless, their tongue dry and senses scrambled.

This is the most brutal metal record to see a release in 2006. If Christ Illusion had made its hoped release date of 6/6/06, it’s absolutely probable that the Earth would have ripped open, allowing the Devil himself to push to the front of the record store queue. There are no parallels to be drawn – Mastodon have a great album ready for release, but it pales like a Belle And Sebastian fan at a Slipknot show in comparison to this untamed beast of a record. It’s a wonder the speakers don’t dribble blood from their cones throughout its punishing duration. (That's not to say Mastodon don't have their place in today's metal scene, nor that they're not compositional pioneers in comparison, but time will remember Slayer's hostility above their Thin Lizzy-loving wares.)

There’s no better way to conclude, to summarise this record, than with the words of Araya himself.

_“Bring on the competition…

…I am the culmination, the fucking standard that all will follow.”_