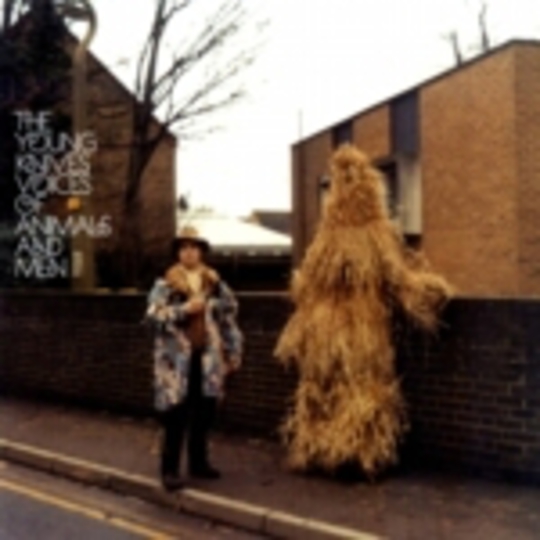 A few years back, whilst the British music scene enthusiastically observed spandex-clad cock-rock and the adventures of a smacked-up cockney chancer, three men voted Least Likely To Rock in school moved from their Leicestershire roots to Oxford, donned lab coats as startlingly white as a Brandon Flowers suit and set to work in their secret underground lair. Here they distilled and tested their bubbling potions, breaking only to watch QI, until they devised the optimum formula for indie-rock in the 21st Century and committed it to record. They have named this record Voices of Animals and Men, and for twenty-plus minutes it is a standout debut.

Its ingredients are no secret: guitar-based, hook-laden, catchy-chorused songwriting in the vein of Bloc Party or Franz, mixed with fun siphoned directly from the petrol tank of Nineties Blur and topped with a thin layer of Mclusky’s dark humour, stirred, arranged and catapulted at great speed towards your ears. It arrives with as great a bang as The Futureheads' debut album did a little over two years ago, and within two minutes of opener ‘Part Timer’ these Knives are imploring us, in unison, to “back down, it’s the best you can hope for” before, post-advice, vocalist Henry Dartnell sheds his mild-mannered persona and hollers, more Relationship of Command-style than the tweed would suggest possible.

From the point of Dartnell’s first breakdown onwards, Voices of Animals and Men becomes a vessel for vocal insanity, from “The horses in the New Forest are running in their Sunday best” to impersonating David Cassidy’s ‘I Think I Love You’ during ‘Dialing Darling’. Pop hooks tear holes in guitar chords without a second thought, whilst vocal charisma is added in spades, forming witty, up-tempo mini-anthems, undeniably catchy in their structure.

It is not until Voices of Animals and Men drops the tempo that you realise wit alone cannot sustain it. Just minutes after ‘Mystic Energy’ - as fine an example of pop perfection as you’ll find here – finishes, we are met with the more downbeat songs, acoustic turns and the less captivating material, swept under the rug and seperated from The Young Knives’ finer moments. The album's frantic feel dissipates, not as captivating nor as much fun to listen to, and only ‘She’s Attracted To’, with its comic tale of in-law encounters recounted in an Art Brut fashion, truly rebuilds this momentum.

Despite its shortcomings, though, it should not be forgotten that Voices of Animals and Men is a decent debut - it's well constructed and promising, and brilliant in places, although guilty of toploading when it comes to the tracklisting. You can’t help but wonder just how great it would have been had the quality of the second half matched the outstanding first, but by 2010 they may have this code cracked once and for all.