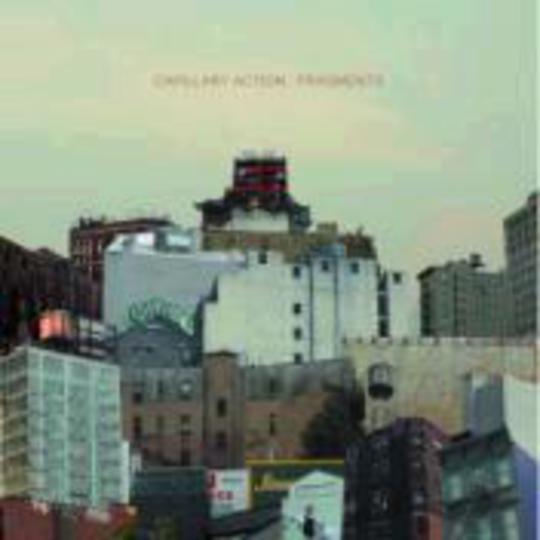 Jonathan Pfeffer was a man on a mission, a man intent on getting his music heard. So, after being rebuffed by a series of labels, he established his own recording company, Pangaea, and Fragments is Pfeffer’s debut solo album under the name Capillary Action. The title is entirely appropriate.

Fragments is completely dizzying, flitting from a stoner rock riff here to pseudo-jazz piano work there, while samba drums pulsate in some fog-filled backroom and pirates play cards for wenches up front. It’s the Back To The Future series condensed into a 30-minute soap opera, Darwin’s most intellectual theories spray-painted across a Greyhound bus. Coherency is not something that concerns Pfeffer: why waste a perfectly good idea because you’ve not got four minutes of material to back it up? Sling it in an existing song, cover and simmer for ten and then dip your wick right in. Fragments is a rubber ball, bouncing about four walls and a stained-glass roof, each impact reshaping it into some wonderfully different object.

Attempt to find a connection between the Fucking Champs-like rock of opener ‘Ticking Ghosts Pt 1’ and the twinkling ‘Scattered Remnants’ but four songs later and all you’ll discover is a headache. This is the sound of a musician left to his own maniacal devices, and an album that’s certain to leave the senses spinning and the stomach nauseous. The live band consists of four members; how the three satellite musicians keep up with Pfeffer’s rampant brainwaves is mind-boggling.

If confusion died and propped a headstone, the carving would simply read “Pfeffer”.