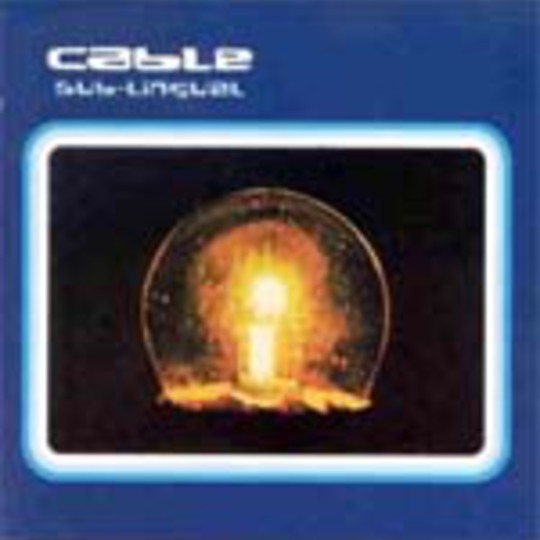 As Cable recorded their second (and last) full length LP, Sub-Lingual, they were also being sued by their own manager. About a year and a half earlier, in 1997, the band's song Freeze the Atlantic (from their first album, When Animals Attack) was used as the soundtrack to a Sprite advert. They went unpaid, as the exposure was intended to ensure the band's success. When it didn't, they were allegedly sued for breach of contract. They fought for a year, and lost. Unable to afford to stay together, Cable split unwillingly in May 1999, two days after Sub-Lingual's release.

The record they left as their epitaph offered a fitfully brilliant hailstorm of electricity and colour. Opening with 36 seconds of the purest electrically generated noise, an almost painful statement of intent, before crashing into the pulsating howl of the Fugazi recalling Song 1, the angular and ungainly beauty of the record is formidable. The droning, hot-wired guitars swirl around deftly simple, often repetitive lyrics, but as the pointed drums attempt to puncture your soul, somehow the music lodges itself inside your heart. The moments of outright gracefulness are even less frequent than on an early Sonic Youth record, but the same hints of the truest pop sensibilities are still there. Even if the journey isn't all that comfortable, Cable know exactly how long to make you wait before they get to the chorus.

Matt Bagguley vocals flit throughout from languid murmurings to tremendous screams. And when they do start to soar, it's because he's fighting back, even though he knows that he's already lost. 'I'll be first in your way' he declares on Widower, and for a moment hopefulness, in spite of everything, wells within you. And as Comprendez? draws the album to a close Cable go out in the only way they ever could. 'You don't know what I need, but neither do I', we're told. But even alone Cable keep battling. The album perhaps saves its sharpest blows for it's climax, but as the final pounding drumbeat is cut short, the inevitable seems to have happened.

And maybe Cable would only ever be defeated. But if the band don't exist any more, their records still do. And, even now, the fight that was within them remains. Matt Bagguley has recently signed to Graham Coxon's Transcopic label. Quite what his fight might now be is unsure, but it's certain he's not given up yet.