Hazel Eyes, I Will Lead You 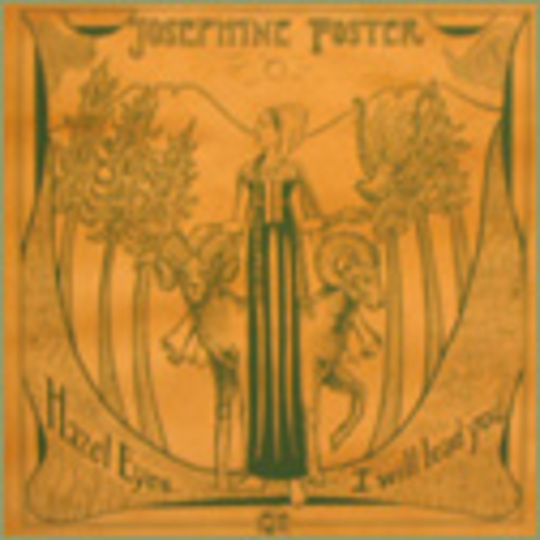 Josephine Foster's voice transcends sentimentality and embraces a spirit of rugged pilgrimage that is the backbone of this stunningly austere acoustic album. One of a proliferating number of artists in the alt-traditional freak folk movement, Foster stands alone with a markedly dark enchantment and seems to revel, convincingly witch-like, in her own cocktail of nocturnal folk spells.

It's difficult knowing where to start on an album of such striking variety. Foster's voice is a spellbinding antique that goes hand in hand with her lyrical enchantment to overcome a need for conventional melody and pave a rare path where the avant-garde is displayed rich and listenable. Opening track 'The Siren's Admonition' sails out on the edge of an off-key harp to deliver a strangely moving message of mystic devotion, and the tinge of eerie sea-shanty from abandoned ship is a constant recurrence. Foster's rich lyricism and imagery takes us to the most visually creative depths of folk music, exposing the character of her songs to light like the finest of painters. Following the filmic hymn to sensitive grace of the title-track, the songs take on the successful feel of classic folk adapted into a new form of dark beauty on another planet, past or future.

'There Are Eyes Above' is a slow-burning, mournful epic of new-folk sparseness, an elegantly strummed sitar providing a melancholy strain. In 'Where There Are Trees' the song momentarily drops off the radar in the relaxed ebb, and a striking, almost comical spiritual austerity takes precedence in the lyrics from which the song radiates ("Where there are trees / I will walk there! / On what has been left / I will rest / And in the hole / which is the thickest / I'll bury my shoes, I'll bury my dress"). 'The Golden Wooden Tone' is of similar expression ("Throw away my food / And find a dish of stone / Perhaps I would be fuller / If I started at the bone / Blow away the leaves / The reeds will cease to moan / For they are all but fetters / Of the golden wooden tone!"), the black cat cited on the sleeve notes coming of genuine use.

'The Pruner's Pair' underlines in quintessence Foster's artistic power as conveyer of the ancient. More than her time-defying voice, the conception of some of these pieces - all Foster originals - has been perfectly executed, the meeting of voice and song seamless, and a primordial spiritual power of music evoked. Harp-led ditty 'Celebrant's Song' is elevated out of a strange (in the context of the album so far) nursery-rhyme simplicity by a flourish of vocals and melody flute which flies over the top with bird-like grace, and only in 'Good News' (in itself a beguiling spectacle) does Foster lose the prevailing thread of intricacy and descend into a merry complacency.

Achieved in Hazel Eyes is a depth of seriously strange beauty, a glint in Foster's voice throughout sufficient to say she knows it. In possibly the most outlandish of alternative genres, Hazel Eyes puts her on top of the weirdo tree with such original luminaries as Michael Hurley and Vashti Bunyan. 'Hominy Grits', all ukulele and laid-back rhythm, is a whim that ends the album on a suitably surreal strain, the final picture in a high-art fairytale of dark wonder.