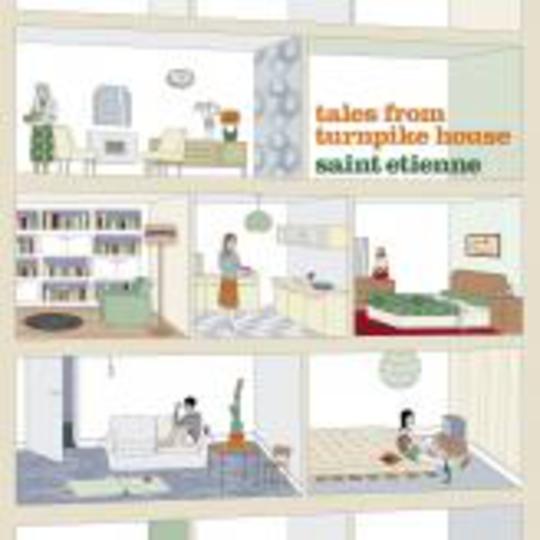 Ah, there is a corner of a quirky, left-of-centre indie disco that is forever Saint Etienne. Shame, then, that their new 2-CD modernist extravaganza ‘Tales From Turnpike House’ doesn’t shine as brightly as the spark we know they possess. It’s the sort of concept album it’s difficult to grasp the actual concept of, too downbeat to be uplifting and too uplifting to be downbeat, plus…sweet mother of ironic retro referencing, is that David Essex**?!

Okay, so that’s not to say this album doesn’t have the odd flicker of brilliance. A lot of its saving graces appear later on, with a moment of truly upbeat disco-pop in ‘Stars Above Us’, the edgy guitar work in ‘Last Orders For Gary Stead’ and the bleak thunder Black Box Recorder previously stole in ‘Teenage Winter’ all dragging the quality levels up. But overall the LP falters too often, and despite claims of being influenced by last year’s Brian Wilson resurgence. The many harmonies feel over-egged and don’t effectively compliment Sarah Cracknell’s still-sweet voice. The strum and jangle of opener ‘Sun In My Morning’ comes across as something more fitting in a suncream advert or daytime property development programme, and closer ‘Goodnight’ does well in mimicking the cringeworthy parts of Flying Pickets**. What’s more, that David Essex duet is simply embarrassing, more because it tries to rhyme ‘vegetables’ with ‘load of balls’ than because Essex sounds like a placid Bowie trying to shit out his own abdomen. A good enough record, but we know they can do better.

After all that sugar-coated urban paranoia, CD2 (‘Up The Wooden Hills’) is a welcome addition to the set. Although basically half-a-dozen tracks ‘for the kids’ in a pre-school sense of the word, it does show that, even when counting to ten and listing some zoo animals to a breakbeat, the ‘Ets’ can still come across like a mix of Playschool, Jan & Dean* and _‘Baby’s First Helen Love* Record’_. Rather sweet, really – at least we know they’ve still got it.