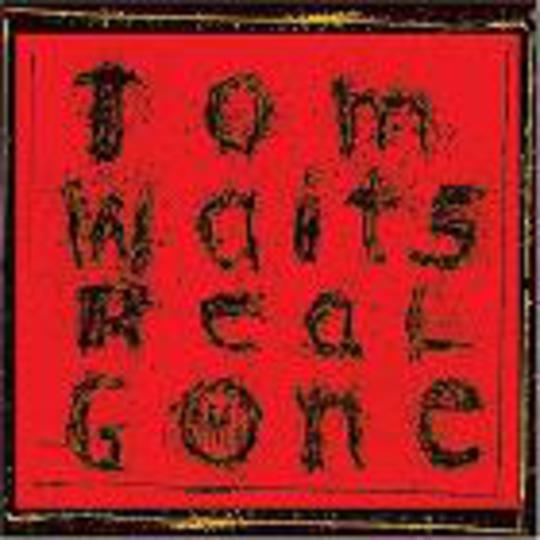 Tom Waits is marked out for sainthood by many. He certainly deserves a chunk of respect, for nailing the role of mature artist getting edgier instead of mellowing out. Straddling the worlds of alternative rock and serious art, Waits assiduously avoids compromise. Which means new material is still precious and he ain't relying on Greatest Hits or re-releases. Real Gone is 'important'. But ut it's also tough going and very samey, both in sonics and lyricism. Even if you enjoy the basic template, you may well run out of steam before the end. I did.

Real Gone is mostly Marc Ribot's tricksy blues guitar licks, painted over grooves built from human mouth noise, some other indistinct percussion, double-bass and atmosphere. Once the groove is built, there's a vague structure involving a narrative verse and a chanted chorus. This goes on for a bit, then the song ends. The first three tracks are all in this vein and they're all wonderful. It makes for an intense start. 'Hill' is spiky, slightly funky even, with highly descriptive lyrics that make little sense. 'Hoist That Rag' contrasts vivid description of grubby militaristic labour with the motion of raising a flag - making a deft, subtle point about soldiering. And then the album peaks, way too early, on the awe-inspiring, enormous, ten-minute 'Sins Of The Father'. This monster takes that blueprint to its limit, enveloping you in an extreme world of love and death and sin in one massive phlump.

Sadly, Waits can't follow it. He's come too soon. Themes repeat without becoming any more lucid, while his language isn't varied enough to enrich the fables beyond repetitive essay. He sings about his woman up and leavin' him four or five times, even admitting the repetition: "You know the story / Here it comes again" on 'Make It Rain'. But that woman has no personality, she's defined only by her absence. There's never a decent back story either, just the context-free description of the feeling of loss or betrayal. "She wrote goodbye on the dust on the hood".

Ultimately, you're left flicking through trying to find something a bit different and feeling a bit ashamed for doing so. Trying to locate something resembling 'single material' on a Tom Waits album feels like sacrilege. But it's his own fault, for not telling those stories properly, rather setting them up as teasing flavours without substance. No, I can't shake that response. And no amount of goodwill or repeated listens can bring this record back to life. Long.

Eternal Sunshine Of The Spotless Mind