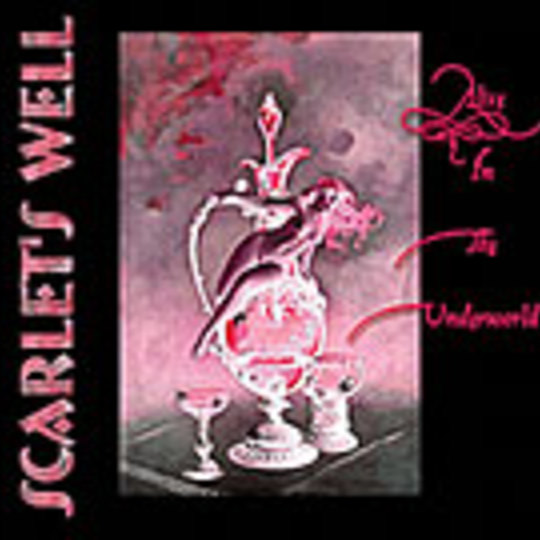 Back we go. Sailing, drifting back, across some uncharted, wine-dark sea, back towards a land of mystery and imagination. Absent from all atlases, it exists only in dreams and on ancient maps where cartographers have scratched ‘Here Monsters Be’.

With the wind fluttering the sails, the ship slices through the spume ‘til she’s close enough and good enough to anchor. There we dive into the glassy water and swim toward a tiny, mist enshrouded cove. Soon we are able to wade onto the warm crystal sand and take a look about us. The beach gives way to palm trees, gives away to lush forest... and there, in the distance somewhere, can be spied the towers, can be heard the hustle of the fabled village/town/city (it changes) of Mousseron. A brightly coloured conch shell lies in the sand at your feet, you pick it up and place it to an ear - a sweet, enchanting music can be heard. That’s it then, no doubt about it: we are back. Back in Scarlet’s Well.

Part three of the Scarlet’s Well series, following on from ‘99s ‘Strange Letters’ and ‘The Isle of the Blue Flowers’ from 2000, ‘Alice in the Underworld’ presents eleven new mythic tales, seemingly etched on parchment with quill dipped in squid ink, by a teller of tall tales (The Monochrome Set’s Bid). Add to that, the six sirens with honey-sweet voices that have been set to woo and bewitch us with their calm, creamy tones, and a sound that is positively drunk and giddy on it’s own richness and you have a veritable treasure chest of sparkly, shiny songs waiting to be discovered.

Of the music there is a South Seas shimmy to ‘Night of the Macaw’ a Hawaiian hula to ‘The Ballad of Johnny Freak’ and a Bavarian beano on ‘Mr Mystery’s Mother’. ‘Death’ is, contrary to it’s title, a lively, swishing Spanish flamenco swirl and a Free Design kite bobs and dances among the cotton-wool clouds on the pastel hued ‘Dream Land’.

But this grandiose, vibrant, colourful music acts in the same way the lotus plant acted on Odysseus’ men in Homer‘s epic poem ‘The Odyssey’ - it keeps us in a charmed, drugged, indolent haze. Unaware of any trouble looming.

These dream-like melodies paint a picture of a paradisiacal idyll - and in dreams our lost paradise can be regained. But in every paradise lurks the serpent, and through each of these stories a ssinister sserpent sslitherssss...

Lyrically a kind of concept album then, where we leave the fairy-tale isle and journey through the Underworld (with the titular Alice I presume, she’s never mentioned) where we encounter all manner of freakish denizens that lurk in the Stygian gloom, like characters imagined by Edgar Allan Poe or HP Lovecraft - there’s a creature who crawls from his dank pit and decides to run for Mayor ("We’ve seen you kissing babies that you used to eat") - a move into politics which proves that even the foul beasts of Hell can sink lower if they tried - then there’s the wandering lost souls and those that dine on boiled wolf and the dead who sing serenely in their eternal slumber. Eventually we come to the end, only to encounter end-of-level baddie, the fearsome Cerberus, the many headed dog with snakes for tails who, of course, guards the entrance/exit to Hades. Fortunately Alice lulls him to sleep with her lyre and soon she is free and back once again in amongst the throng of Mousseron.

An absurd idea for an album? Maybe it is, or maybe it’s just brave. Angels rush in where fools fear to tread. In any case the unusual, esoteric subject matter never once over-loads or distracts us from the sumptuous, highly infectious music.

Charming and beguiling, exotic and eccentric, Bid, his maidens that make up Scarlet’s Well, and the wonderful Madrid based Siesta label, proffer here a delightfully flamboyent, yet, still, somehow thoroughly English wordplay and a type of music for daydream believers. So if you are feeling dulled by grey skies, by grey music, by grey everything, then this is the elixir you need. Suddenly a monochrome reality is shot through with vivid Technicolor, and dreams of a land in a sparkling blue-green sea, where hammocks creak and a sultry tropical breeze rustles the palms, are re-awakened.