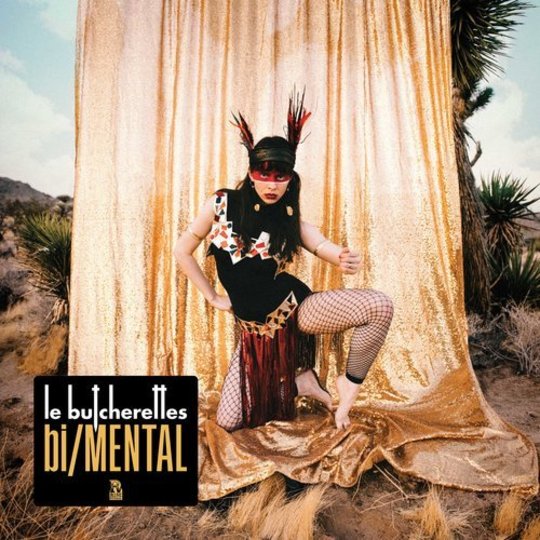 Guadalajara’s Le Butcherettes hardly need my praise. They’ve already blazed a trail toward the rock pantheon over the past decade - warrior and founder Terri Gender Bender has turned many a head at gigs with near-topless stunts and bloody props, and earned the blessings of other giants like Iggy Pop and John Frusciente [sp?]. Behind the crushing riffs, though, our fierce protagonist lends a voice to the women who often suffer in silence, and spins esoteric verses that smack more of avant-garde poetry than rock bravado.

That said, though, a new obelisk rises. The peasants must again rejoice. Le Butcherette’s fourth album bi/MENTAL is a beast of a thing, a beast of many faces and fangs, that asks two tough questions: where did you come from, and where will you go? Western cultures celebrate family ties as sacred and unseverable, but then sons and fathers break out while moms and daughters stay ensnared. Here, Gender Bender pokes in the fissures between overbearing parents and captive children, the babies that anchor and liberate their tired mothers, and how the relationships caught in the middle strain under the baggage - all while the gang’s twisted heavy metal sears its imprint upon yr skull.

Cool! Pitch talk over. Now let’s break for a minute to talk about how much bi/MENTAL rocks. Alejandra Robles Luna has that great hulking WHAM that demands reverent moshing; brutal opener ‘spider/WAVES’ crashes in with all the divine fury that Gender Bender threatens to unleash, while ‘give/UP’ shakes the ramparts of Led Zeppelin’s fortress. Yet, in a very new wave-y way, little tricks skewer ordinary songs into mutated marvels. A massive gamma ray of a synth (which sounds like one of Juana Molina’s gizmos) squirms through the wicked ‘struggle/STRUGGLE’; actual sheep seem to bleat in the Psychedelic Furs’-esque ‘little/MOUSE’. Long story short: I was constantly stupefied when I first spun bi/MENTAL, and that slackjawed sense of awe hasn’t waned much on the eighth or ninth go-round.

And that’s just from the sound! Wait till we talk about words! The idea is that, by severing our bonds with the past, we can face the present with a clearer mind. Independence looms large over bi/MENTAL - and while Gender Bender often repels her captors with resolute ease, she’s aware that others don’t get out so swiftly. “My heart is heading out the door,” says Gender Bender in the slick breakup song ‘strong/ENOUGH’ - and in the video, the fleeing protagonist packs an actual human heart into her bag, still slimy with blood. Elsewhere, the Butches recruit Mon Laferte on the goth-tinted banger ‘la/SANDIA’ (aka ‘The Watermelon’, which codes in Spanish a rallying cry for pregnant women who get trapped by conception into an unwanted union: “no doubt we have a fire from within...flee, you don’t owe anything to anyone.”

Of course, liberation is rarely that simple, and Gender Bender acknowledges that too. One of the most righteous moments on the album, ‘dressed/IN A MATTER OF SPEECH’, pinpoints the catharsis of birth to a horrible truth - namely, that a daughter that won’t produce has failed her parents. It’s uncanny, when you think about it, to convey a sort of catharsis that only women will know, within a song dressed in the rock theatrics of, say, Rush or Guns N’ Roses. But the Butches have done it, and I can’t hear this one without literally howling the chorus: ‘sweet natural child puts all doubts to reeeeeest’.

I’m not sure if your copy of bi/MENTAL will end like mine does. The other most righteous moment of the album, ‘/BREATH’, marks the final phase in the retreat, when the individual seizes their own self from their roots - and, lawdy, what a finale. The oceans are parting, the earth ruptures, a fireball rends the sky in half - ‘this is goodbye, farewell to all the known gods’ - and then, just like that, it’s over. Silence. Which leaves you, ultimately, to wonder if this Super Saiyan getaway blasts off into the stratosphere, or snaps back to terra firma. That’s the real genius of Gender Bender’s vignettes - no matter how many times you rock out to Le Butcherettes, you can never totally crack the codes. And that’s fine, because the intrigue just adds to their already towering altar.