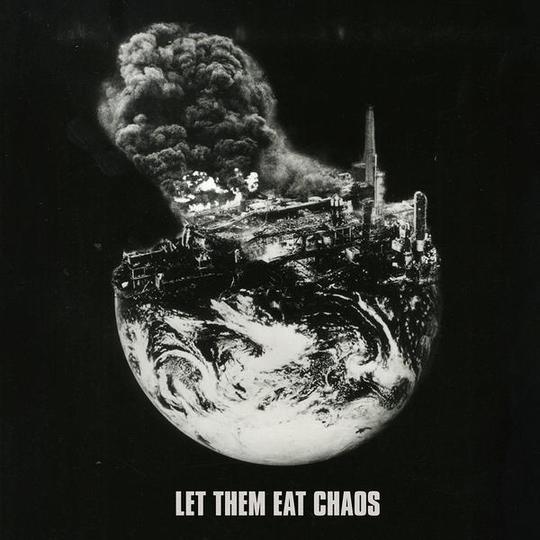 When Kate Tempest exploded on an unsuspecting world, it was with two releases. One was an album, nominated for a Mercury Prize, Everybody Down and the other, Brand New Ancients, was a performance poem that won the prestigious Ted Hughes Award. Both were a breath of fresh air and showcased why some were called her a post-clubbing Dylan Thomas. Now she has returned with producer-of-the-moment Dan Carey, with a new album and poem (you can buy it as a book) that again shows she is at the top of her game.

As with previous Tempest releases there is a story running throughout Let them Eat Chaos. It's broken down into seven tracks that tell the story of seven neighbours who are all awake at 4:18 one morning while a storm rages outside. Each character acts independently to the others and at the end of the song their story is wrapped up neatly. It is only in the final tracks that all the characters realise they aren’t the only ones awake at this time and acknowledge each other’s existence.

‘Picture a Vacuum’ kicks the album off. Throughout its duration Tempest describes the Earth spinning in space and then pinpoints on London. As the vivid introduction continues, the music goes from ethereal synth blips and beeps to hard beats and basslines. ‘Lionmouth Door Knocker’ carries on these musical themes as Tempest delivers her "There are eight million stories in the naked city" introduction. Throughout ‘Lionmouth Door Knocker’ Tempest juxtaposes London’s elite with its poor. Lines like “People meet by chance fall in love, drift apart again. Underage drinkers walk the park and watch the dark descend. The workers watch the clocks, fiddle with their parker pens, While the grandmothers haggle with the market men” and “Here, where the kids play and laugh until they fall apart. Its kiss chase and dancing. Till it’s mistakes and darkened rooms. Too fast too soon, too slow too long. We move around all day, but we can’t, move, on”, “Motorbike beneath a tarp. Beaten up punto” and my personal favourite “Rich flats, broke flats. New flats. Old flats. Luxury bespoke flats. And this has got to be a joke flats” paint the picture perfectly. But there is also a chorus “Is anybody else awake? Will it ever be day again?” that hammers home the overall thing/story of the album. Clever stuff to sell us a location and concept in under three minutes.

Stand out track ‘Europe is Lost’ is a damming indictment of our times. Originally released last year as a single, it had sad prelude to Brexit and to where our self-serving society could end up. However, like with all of Tempest’s best work, there is humanity and comedy poking through the dark clouds. “Coz it's big business baby, and its smile is hideous. Top-down violence, structural viciousness. Your kids are doped up, on medical sedatives. But don’t worry ‘bout that, man. Worry ‘bout, Terrorists.” These let us know that the future hasn’t been written and we can still change things.

‘Whoops’ is the story of a festival sound engineer called Pete who is living with his dad while he saves some cash to buy a place of his own, but sadly when payday comes around he spends all his money getting smashed and never really saves a penny, while a skittering Carey beat plays out underneath. But what ‘Whoops’ is really about is how Tempest and Carey are experimenting with pop music. It’s the catchiest track on the album thanks to a repetitive beat and driving bassline. However at times it feels like ‘Circles’ and ‘The Beigness 2.0’, but they felt fresh and their choruses worked better than and felt more immediate than "Woops. Back here again. How many times have I sworn it’s the end? Woops. I know this feeling. Shovelling the rubbish till I’m staring at the ceiling. Woops. Dancing to a shit tune. Hands in the air when it hits you. Woops. I’m lying in my bed. And my brain is eating my head”.

‘Breaks’ and ‘Tunnel Vision’ close the album when in it all the characters go outside side to watch the storm, meet each other and realise they are connect and a community, rather than individuals living in flats. The last line of Let them Eat Chaos is really the whole crux of the work. “Trust is, trust is something we will never see. Till love is unconditional. The myth of the individual, Has left us disconnected lost, and pitiful. I’m out in the rain, it’s a cold night in London, screaming at my loved ones, to wake up and love more. Pleading with my loved ones to, wake up, And love more.”

Let them Eat Chaos yet again showcases not only Tempest’s ability at a story teller, but also her vision. If she wanted to, Tempest could easily release an album either full of club bangers, or conscious hip-hop introspection, but instead she wants to not only challenge the listener, but herself. On Let them Eat Chaos Tempest has cemented herself as a poet/rapper of the highest order, who isn’t happy just make the masses smile, but to challenge and make them think and love too.