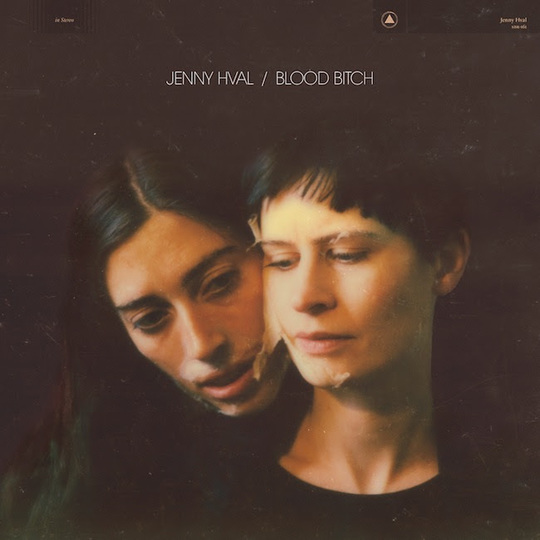 Odd, innit. Even now, in spite of all our feminist advances, menstruation remains unclean, unholy, and downright disgusting. If the subject must be broached in public, women do so in code. Even Jenny Hval, an artist that ruminates on the female body, employs euphemism to describe her blood-soaked fifth album. “It’s about vampires”, she says to a friend in ‘The Great Undressing’, and if the listener only skims over the shiny icy lake of Blood Bitch, the notion seems plausible. Crack the surface, though, and the true nature of this shadowy venture emerges, frightening not in a pulpy horror sense but through gothic suggestion of the taboo: that a woman’s period prepares her for love.

Sometimes, listeners don’t know how to react to Hval. Last year, Apocalypse, Girl was a bold step into uncharted regions, sweeping monologues and startling inquiries from barren plains. It’s a breathtaking journey, but one that many balked at for its steep crags, derided instead as too abstract to climb. Well, those detractors can’t whine now – for Blood Bitch opens not with a weighty monologue, but with a single scene set by ominous synths in ‘The Ritual Awakening’: “I clutch my phone in my sweaty palm”. Hval’s always been a visceral storyteller, but now she really dips us into a new world, crimson-tinted and surreal, led by either her vampire self or her real artist self.

Oh, this world! Dark like empty clubs and subdued raves, places where Cosey Fanni Tutti might mesmerise the hapless crowd – stark but lush, these are pop songs for moonlit lakes, soft throbs to bob in while no one else is looking. For this is the bigger secret of Blood Bitch, which unlocks gently with blooming hiss over violet, shimmering songs like ‘Conceptual Romance’– how does a woman communicate the raw desire that her period conveys in private? Hval described her notion of 'abstract romanticism' to SPIN as 'love trapped by commercialism' – or, as it goes in the song, “a sexual holding pattern”. It might not make sense now, but slip into the soft pulse of ‘Female Vampire’ – which becomes the hyperventilated beat of “In The Red” - and the logic of Blood Bitch unwinds like a ribbon.

Oooh. Ohhhh. Breathe in, breathe out. It’s hard not to quail or shudder in Hval’s aura - malicious gurgling bubbles behind the sublime ‘Secret Touch’, casting the otherwise triumphant consummation in shadow, in doubt. “What is this desire?” she asks in the following closer. “…Does anyone have a language for it? Can we find it?” Yes we can, Hval. If anyone can, it’s you, with your siren calls of pure crystal, your words so precise and probing.

Not all these wonders are sunk in nightshade. In intermission 'Untamed Region', the camera pans slowly across a bedroom at dawn’s break, as Hval scribes into a notebook – the ponderous synths could’ve easily been lifted from Delia Derbyshire. She awakens to find blood on the bed - I didn’t know it was time yet, she says, and once again she could refer to a vampire’s kiss or a period. It’s a blissful, meditative moment, as is ‘Period Piece’, where a message in Morse code (an SOS?) blips over the down-key beat.

There’s one other big scene, though, that could baffle the unprepared listener. ‘The Plague’ is a collage of sorts, stitched broadcasts and hollow echo chambers that devolve into inhuman screeching. Perhaps most startling, though, is the inebriated variant of Hval that stumbles in to say “Last night I took my birth control with rosaaaaaaay”. She adds, “You were living a life and I was living as a –“ and then stops, as if realizing an awful truth. Vampire? Artist? It’s a real disruption, the sort that strips back the velvet veneer of Blood Bitch and shows us the steaming mess at the center – the agony of rejection, the pain of menstruation, the anxiety of an artist evaluating her own work.

Mmm. To be blunt, I started this review to flare a light, to prove Hval’s artistry and reject her perception of her art as “combined failures”. But now that I am on the other side, I am smitten, dead in heat, and raving, raving, ravished.

Remember Us to Life