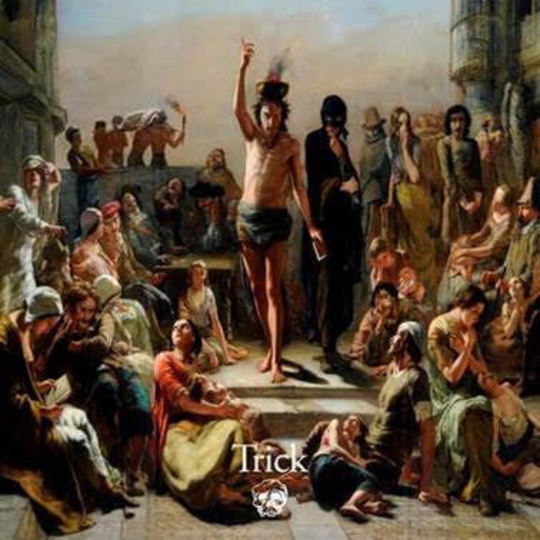 Well, Jamie T isn’t messing around, is he?

After a well-documented hiatus a few years ago resulted in the release of his third album Carry On the Grudge, it’s taken him only two years to release his new album, Trick. It’s certainly interesting to see how it’ll hold up. Is it rushed? Or is there just enough inspiration in him at point that delaying the release would be pointless?

The strength of comeback single ‘Tinfoil Boy’ certainly hints at promise. It’s catchy, anthemic and dark all at once and it opens the album in style. The riff snaking around that cathartic chorus recalls either Rage Against the Machine or Matt Bellamy depending on what era you hail from. The refrain comes with “It’s times like this I feel tricked into waking up.” It’s not exactly a sign of darkness to come, because this is an album painted across the spectrum, but definitive proof he hasn’t abandoned darker themes.

There’s something else to note here too. The track was playlisted by Radio 1, Radio X and 6 Music upon release. It shows a far-spreading appeal that you wouldn’t necessarily expect from the guy that originally came out with ‘Sheila’ (I love ‘Sheila’, by the way).

‘Drone Strike’ then brings in the rap that helped him make his name in the first place. It’s important that he does this, basically because he’s so brilliant it. The chorus, like on ‘Tinfoil Boy’ is guitar driven and features pretty interesting vocal effects. Bound to divide opinion but it works for me.

‘Power Over Men’ feels like AM-era Arctic Monkeys (I mean that in a good way, I promise). It’s all crooning and sexy bassline. It has the harmonised backing vocals and a chorus of: “She had power of men” and talk of being at the bar sipping of gin. ‘Tescoland’ is a fun track with frantic drumbeat led along with summery focus. Expect it to go down well live.

‘Police Tapes’ is a completely different beast. Led by a dark throbbing bassline and angry rap, it sits in complete contrast with the two tracks that preceded it. It’s one of the strongest moments of the entire album, really standing out as a sign of creativity and progression.

“Upside down, inside out, if I had a gun I’d blow my brains out” starts ‘Dragon Bones’, in conversely chirpy fashion. It’s not the strongest effort on the album, but it works. ‘Joan of Arc’ then mixes classic Jamie T vocal style with a more dramatic feel and those harmonised backing vocals.

‘Solomon Eagle’ again features a quite dark feel with heavy synths providing a backdrop for the fantastic vocals. With the possible exception of ‘Drone Strike’, it’s some of his most contagious rapping on the record. It harks back to his roots, with references to ‘Sticks n Stones’ in particular, but sounds fresh.. The juxtaposition then continues with ‘Robin Hood’ feeling like the sort of indie-fare the late noughties might serve up. It’s chirpy and chops the album up nicely. Like ‘Tescoland’, it’s good fun but you feel like it might be a little disposable in the long run.

‘Sign of the Times’ isn’t a Prince cover. It does sound a little bit like Good Riddance from the intro though. It’s not as awful as that might suggest, it’s actually a standout track. Jamie is back in the dark mood, asking: “Where did all the venues go, we lost them all to businessmen.” When the guitar kicks in halfway through it then feels borderline euphoric despite the melancholy of: “I wish I had been a little more exceptional...No I’m not enough.”

‘Crossfire Love’ is a rap in that classic style and an unconventional chorus of the type that anyone else would struggle to pull off. ‘Self-esteem’ then comes to see off the record with over five minutes of introspection. It works because it feels genuine and you know it’s genuine. It breaks down into a mixture of violin and violent distortion by the end and that feels apt for the record and what Jamie is trying to project here.

So the answer to the question of whether the album was ready or rushed is clear. Trick is comfortably Jamie T’s best album so far, showing off every element he can and touching many bases without ever feeling like the contrast is jarring. He’s a man operating at the peak of his powers right now and when Jamie sings: “I was never enough” on the album, he’s never been more wrong in his career.