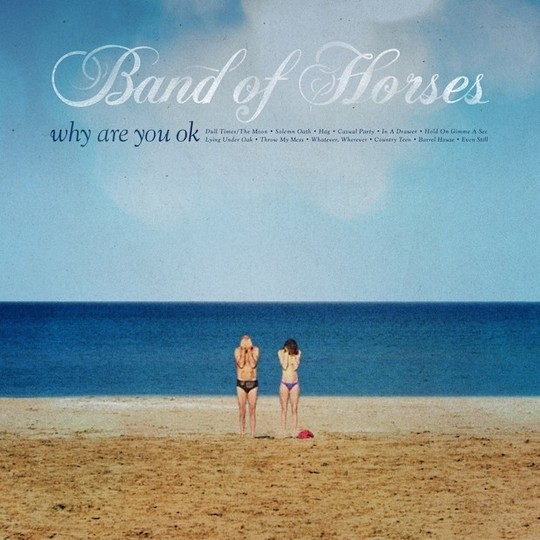 The strange demise of Band of Horses remains difficult to explain. They had the world at their feet, once upon a time; snapped up by Sub Pop in their early days, with their debut, Everything All the Time, positively fizzing with promise. Structurally, it wasn’t ever going to break the folk-flecked indie rock mould, but the textures were lush and pretty, and there were so many big hooks and choruses, especially on the teen-drama-friendly 'The Funeral'. Bringing it all together, of course - the centre-point around which everything else revolved - was Ben Bridwell’s voice. It cut right through the instrumentation, so rich and expressive, and he had the backstory to match - much was made of the years he spent homeless in the surrounding press.

Three years later, on follow-up Cease to Begin, we had a leaner, sharper Band of Horses. Economy was apparently the name of the game for the adopted Seattlites, from opener ‘Is There a Ghost?’s 14-word lyrical limit to the sleeker, lither sound of the album overall, which combined polish with melodies so pointed you could cut yourself on them. It felt like they’d found their niche, both sonically and thematically; they flitted between non-sequiturs (‘Detlef Schrempf’, ‘The General Specific’) and the achingly direct (‘No One’s Gonna Love You’, ‘Cigarettes, Wedding Bands’) with real verve, and genuine purpose.

And then, from nowhere, it all began to unravel. Perhaps the switch from grandiosity to grit between LPs one and two had painted the band into a corner; it might just be that they flat-out rushed Infinite Arms, or plain ran out of ideas. Whatever it was that hamstrung Band of Horses on their third full-length, we were served up an album that sounded utterly indecisive, scored through with confusion and half-heartedness; vague stabs at experimentation backfired, and the quieter moments lacked that signature disarming honesty. You kind of got the impression that they’d tried to be all things to all people, and ended up pleasing nobody.

The less said about 2012’s Mirage Rock, the better; this was no longer a band in the midst of an identity crisis, just one that was phoning it in and aiming straight for radio-rock so lightweight and lacking in substance that it almost seems perverse when you see physical copies of it on store shelves. In early 2014, though - right in the thick of the release graveyard that is January - Band of Horses quietly put out their first live record, Acoustic at the Ryman, a collection of tracks cut in super-high fidelity at Nashville’s Mecca for folk and country. A slew of classics were stripped back, Bridwell’s gorgeous vocals took centre stage, and I remembered what I loved about this band; how much they had going for them, before everything so dramatically went south.

Also encouraging was Sing Into My Mouth, last year’s collaborative covers LP from Bridwell and Iron & Wine that seemed like a no-nonsense delve into the pair’s biggest influences, one that was driven by nothing other than a good old-fashioned love of their musical touchpoints. The album art, of the pair sitting in a bar, beers in front of them, spoke poetically to that idea too. That’s where you hoped the next Band of Horses record would come from, especially as - during the promotion of Mirage Rock - Bridwell had already suggested that the early ideas for LP5 were taking a deeply worrying jam-based, seven-minute-plus shape.

Happily, those initial sketches have apparently failed to come to fruition on Why Are You OK, because only the opening track, ‘Dull Times/The Moon’, stretches past the five-minute mark. Frankly, it’s quite welcome to do so. It’s such a lovely, floaty way for the band to reacquaint themselves with the listener, a gentle cascade of guitars, and with Bridwell’s tentative croon only interrupted by a philosophical spoken word sample. Towards the end, we veer thrillingly into rough and ready rock and roll. For a band that have spent the last six years sleepwalking, this feels like quite the comeback.

I interviewed Bridwell for this site around the time that Acoustic at the Ryman was released, and spoke to a man who’d very naturally, very elegantly, put his nomadic past behind him in favour of domesticity and fatherhood. He is at his best when he’s at his most genuine and, even though those particular topics are never likely to set anybody’s pulse racing, he addresses them with an arresting warmth and affection on Why Are You OK - a record named after an inadvertently profound inquiry from his son.

As much as reading into titles is always a risky business, you can’t help but suspect that ‘Casual Party’ is supposed to represent a counterpoint to ‘Weed Party’ off of Everything All the Time; as he approaches middle age, Bridwell has ditched drugs for dinner parties, where he’s bored shitless by the banality, but is too nice to say so. ‘In a Drawer’, meanwhile, on which J. Mascis lends a fine vocal turn, is a cutely-pitched ode to nostalgia; an old photo sets Bridwell off, and the chirpy, energetic instrumentation reflects the younger self that he’ll never quite recapture.

The conventional wisdom would likely tell you that nobody wants to hear a rock record about domestic bliss, and so Bridwell deserves credit for carrying it off so earnestly; he’s a very difficult man to dislike, especially when ‘Country Teen’s so wistful and ‘Whatever, Wherever’ is replete with such lovely devotion. Jason Lytle, of Grandaddy, has been drafted in behind the boards, and it’s hard not to feel that he’s a fan of the band first and a producer second; like anybody else that loved Everything All the Time and Cease to Begin, he seems to want to steer the band back there, away from the kind of aesthetic that’ll speak to mainstream radio and movie trailers and absolutely nobody else.

Band of Horses have rediscovered the magic of old here; the textures are so often sumptuous, especially on ‘Hag’, with bursts of shimmering guitar melting into a sedate sonic landscape, or the fabulously atmospheric closer, ‘Even Still’. It’s not they’ve gone back on themselves or regressed; it’s just that Band of Horses have naturally, and happily, managed to wind their way back home.