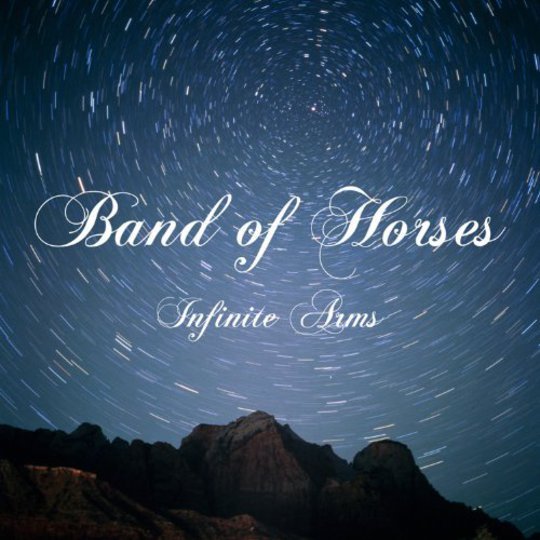 What does America sound like? We know what it looks like. It's beautiful enough to make you cry. It's ugly enough to make you sick. America’s soul is similarly conflicted. One minute it's a country defined by its benevolence. The next its belligerence shocks the world. The character of American music isn’t so far removed from all that. Whether under the Americana banner or not, the American sound can be characterised as much by its tonal and lyrical referencing to mountains, plains and coasts as it by its timing and placement among the country's short, but rich history. It’s pretty easy to forget that a country’s culture is usually augmented by its music, not so much the other way around. And while Seattle's Band Of Horses may appear a little callow, stood against the greatness of the North American landscape, their third album Infinite Arms glows with that familiar sound, a sound born with an American heart.

It’s perhaps no great coincidence that the glow of childbirth inspires Infinite Arms, too. Recorded around the time of the arrival of Ben Bridwell’s daughter, the band’s pretty-voiced lead singer and main songwriter even manages to sound like a new father, or like an overwrought man on the precipice of fatherhood. At times, the extra weight of responsibility on Bridwell’s shoulders and the feeling that he would rather just be a father and not a singer in a rock band manifests itself via bouts of lyrical anxiety. Despite 'Factory'’s elegant, string-swept allusions to something happier, Bridwell struggles with hotel loneliness: "It’s temporary this place I’m in / I permanently won’t do this again." He later adds with a little despair: "Well I feel awful / time gets wasted in this misery / and darling I don’t ever wanna come back home."

Post-birth, Bridwell is a different man. Fleet Fox clone, 'On My Way Back Home' fizzes with a childlike, Christmas Day joy. You can almost picture Bridwell, beaming from ear to ear and with eyes to the heavens, as he skips merrily home to be with his wife and daughter. "Every step / a victory it was / I was cheating death / just in time I woke," sings Bridwell, evoking the I’ve-Been-Saved-Now-I-Know-What-I-Must-Do awakening that accompanies every new episode of fatherhood. It’s an unaffected bliss only Americans could flaunt so willingly. Infinite Arms is like that. Excerpts from American life and a common American man philosophy are woven throughout it. Band Of Horses’ familiar Southern rock-come-alt-country musical framework cradles the kind of uncomplicated reflections and confessions you might associate with an Ernest Hemingway character. It’s a formula that embellishes Bridwell’s fluty tenor and brings his down-home life into far more intimate focus.

Intimate too is the album’s title track and centrepiece that, once again, illustrates the band’s seemingly effortless ability to transpose tenderness in life to tenderness in music. To the chirping of birds and the ticking of crickets and grasshoppers, Bridwell sings and emotes like a crushing teenager; his voice belying his age, his expressions of pre-fatherhood fear almost too simple and too innocent to stomach: "I was so lonely / I didn’t see / it’s like living in a movie / twisting the plot." But Bridwell is like any other American man and allays his fears with thoughts of loved ones: "Friends and family / the little things I’ve got / my thoughts drift to you." The drink-affected, late night ruminations of 'Evening Kitchen' – "For me, this bottle of wine / is to slow down my mind / and forget the things that I knew, I knew" – and the George Harrison-influenced 'For Annabelle', with its meowing sitar licks, add to Infinite Arms’ mellow, humid atmosphere.

There’s no doubt that the band’s switch to South Carolina (from Seattle) has had an affect on things, sonically at least. Infinite Arms, like Cease To Begin, offers the listener layers of warmth with rich, multi-tracked guitar textures and a greater use of harmonies than before. The straight rock of 'Laredo' stacks countless Les Pauls and Marshall amps together to create a sound more American than a front yard with the stars and stripes plonked in it. 'Blue Beard’s complex harmonies, although pleasant, stray worryingly close to Chicago territory. Although this is certainly the band’s most vocally adventurous record so far, the rich, carefully constructed sonic layers come at the cost of a degree of excitement. Perhaps the big label switch to Columbia has forced their hand a little too. There are certainly more songs here that fall under the rock-pop bracket, way before you’d ever think of them as alt-country, country rock or even Southern rock. 'Dilly' is a chirpy bit of Fleetwood Mac radio-friendliness, while 'NW Apt.' sounds a hell of a lot like Snow Patrol’s 'Spitting Games' and/or Doves’ 'Pounding'. The tame 'Compliments' just feels a little like a Cease To Begin cast off. Infinite Arms isn’t, alas, an album without moments of disappointment.

Despite these reservations, Infinite Arms is successful at what it sets out to do. If the Arms are Bridwell’s, arms about to hold a child for the first time, the Infinite are those that have come before and those that will follow. Using the medium of that classic American sound, Infinite Arms is, after all, a simple parable of (and for) the regular American man. Final track, 'Neighbour' – a by turns tender and stirring affirmation of the all-American belief in the power of communion – perfectly encapsulates the album. "There is compassion and depth in a neighbour," chirps Bridwell to a gigantic wall of glorifying guitars. Only they could get away with it. My advice: lie back, close your eyes and think of America.

This is Dubstep Vol.2