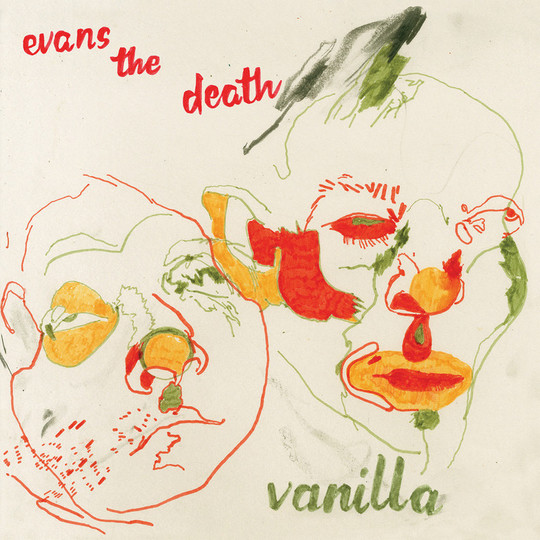 With their self-titled 2012 debut and its 2015 follow-up Expect Delays, Evans the Death firmly established themselves as one of the best indie pop bands around. Their grungy, crunchy guitars, poppy hooks and Katherine Whitaker’s gorgeous voice were a combination made in heaven, and after two slam-dunks, the question in the back of everyone’s minds was, 'what now?'

Listening to Vanilla feels like listening to the band ask themselves that very question, coming close to answering it, but never quite getting there - in a good way. Having reassured their listeners for most of opener ‘Haunted Wheelchair’ that it’s still very much them, the strange chaotic breakdown in its middle eight and the bipolar hopping between funk pop verses and punk proper choruses on the next track ‘Suitcase Jimmy’ make you sit up and go 'what’s this? What are they doing?' The question of what kind of band they are continues throughout the rest of the album, giving it a sense of playfulness but also of chaos and instability that embodies the lyrics of ‘Haunted Wheelchair’s refrain: “I’m exactly where I want to be…Why is this happening to me?”

The hints of funk and soul infused into their trademark indiepop sound throughout Vanilla blend surprisingly well. Whitaker has adapted her vocal ever so slightly and made it more belty and rich to fit this new style (a change you might’ve predicted if you’ve seen them live recently, given she was already singing this way increasingly when the band were touring Expect Delays), and she does it really, really well. ‘Cable St Blues’ is a beautiful soul number, rich with saxophones, yet with indie-as-fuck lyrics that maintain that sense of importance in the everyday.

Occasionally the genre hopping and ostensible messing about feels a little bit contrived. The breakdowns in ‘Haunted Wheelchair’ and ‘Hey Buddy’ feel a bit contrived , and the central metaphor in ‘Hot Sauce’ doesn’t really work. However, I’d MUCH rather a band that kept pushing itself, challenging itself and taking risks, however non-organically, than a band that let itself stagnate, or even just rested on its laurels. And not that they sounded like they were in any danger of that whatsoever before, but it feels like they’ve made a conscious effort to say one step ahead of people’s expectations.

And they do still maintain that ground-level DIY feel, and keen sense for details as lyrical hooks – see ‘Disowner’: “Sleeping on a cracked leather sofa / Pretending you aren’t listening”, and ‘Armchair Theatre’: “You took me to the park / Through used johnnies and dry leaves”. A standout track on the record, ‘Armchair Theatre’ perfectly captures the bleakness of stale romance: “Now that daytime TV / Isn’t what it used to be”, and later, “I wanted a nice photo / Why did you have to pull a face?”

You get that DIY sense from the production too – the conscious decision to limit themselves to eight tracks per song gives the album a close, almost cramped feel, refusing to blend into the background. This deliberate too-close-for-comfort-ness endures right up to the very last second of the long breakdown-outro of ‘European Bison’ that feels unwilling to quit in spite of itself, like a lover who knows they’ve lost a fight yet still can’t seem to stop talking. Vanilla is an intriguing and often fun record that not only rewards repeat listening, but almost demands it.