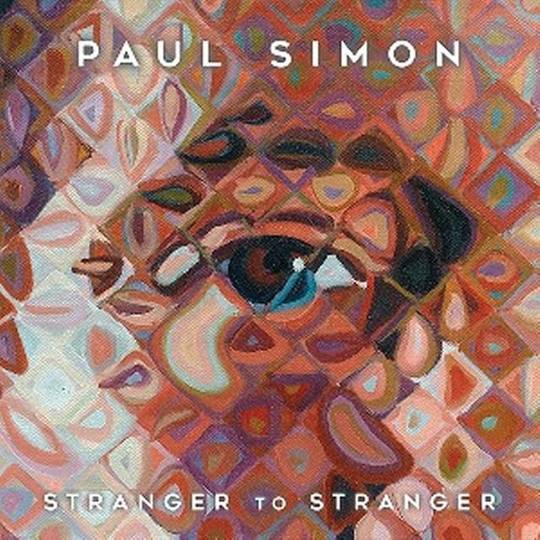 In the current musical landscape, Paul Simon’s voice is functionally irrelevant. Like most of his contemporaries, he and his (mostly pre-1990) catalogue have become the subject of study, reverence and emulation, but we no longer rely on it for running commentary or poetic counterpoint. Likely apprehending this on some level, the crosshairs of Paul Simon’s attention have shifted squarely to the eternal and the absurd. His last album, 2011’s very good So Beautiful or So What found him, in between voicing God and narrating a Pearly-Gates-set romantic encounter, groovily espousing the humanist thesis statement: “Life is what you make of it/So beautiful or so what.” This year’s Stranger to Stranger is essentially a sequel.

If the world isn’t as hungry for a new Paul Simon album today as it was in the mid-Sixties, or mid-Seventies, or mid-Eighties even, so what? “I make my verse for the universe/I give it away for the hoot of it…the tree is bare but the root of it/Goes deeper than logical reasoning.” That’s from 'Street Angel', track three, which sanctifies the anonymous masses who walk the streets every day. He strikes a similar tone struck in 'In a Parade', wherein the protagonist, after swallowing some grape soda, muses, “My head’s a lollipop and everyone wants to lick it/I wear a hoodie now so I won’t get a ticket/I write my verse for the universe.” It’s a wearied absurdism, humbly revering the mundane. It’s less ecstatic than, say, the galaxy-death passages in 'The Boy in the Bubble', but no less fraught with proof of struggle.

Between the cosmic tomfoolery come some very series inquiries into those Big Life Questions. Sometimes his tone is resigned and foreboding, as on 'The Werewolf': “Most obits are mixed reviews/Life is a lottery and a lotta people lose…The werewolf is coming.” Elsewhere he's downright desperate; “I trade my tears to ask the Lord for proof of love” punctuates the ponderous 'Proof of Love'. The sentiments resonate all the more because Paul Simon has presumably not lost the “lottery” he alludes to. He’s a winner, but his victory seems only to have made evident the fundamentally unfair conditions of the game. Victory, to be sure, is preferable to loss. But it’s not more cosmically justified, and it hasn't answered any of the questions he'd hoped it would.

Between the poignancy, however, is a tiredness. 'Wristband' — the album’s lead single — is a prime example. A song that begins as a jokey account of getting denied entry to his own concert morphs somewhat lazily into a stab at social commentary: “The riots started slowly/with the homeless and the lowly/then they spread into the heartland/towns that never get a wristband.” It’s true; many of those competing in the USA’s Lottery of Life will never have a chance. But the levity of the first half of the song undercuts the sincerity of the potentially strong 'wristband' motif, and the song ends before it can pick up any additional speed.

Other sub-par spots include two instrumentals, 'The Clock' and 'In the Garden of Edie,' which, while not downright bad, are not much fun and do only moderate thematic legwork. Same with the album-closing 'Insomniac’s Lullaby,' a meandering, half-funny ode to the sleepless. 'Insomniac’s Lullaby' ends, however, on a high note, with an ambiguous last line—is it “All fall asleep”, or is it “I’ll fall asleep”?

Stranger to Stranger’s effect is most potent when there’s some interplay between a complex, danceable groove and a salient philosophical offering. That dancing-on-the-edge-of-oblivion feel, you know? Simon gets total credit for staying interesting and pushing stylistic boundaries at an age where many of his colleagues have fallen into different versions of complacence. Having achieved most of what there is to achieve for a rock songwriter, and with his brand presenting fewer and fewer footholds for young-and-hungry music fans, the target of these verses is certainly the universe, and you are free to come along for the ride or not. I doubt very seriously that Stranger to Stranger will be Paul Simon’s final offering. I certainly hope not—as he approaches the hereafter, it’s a lot of fun to hear him groove to it.