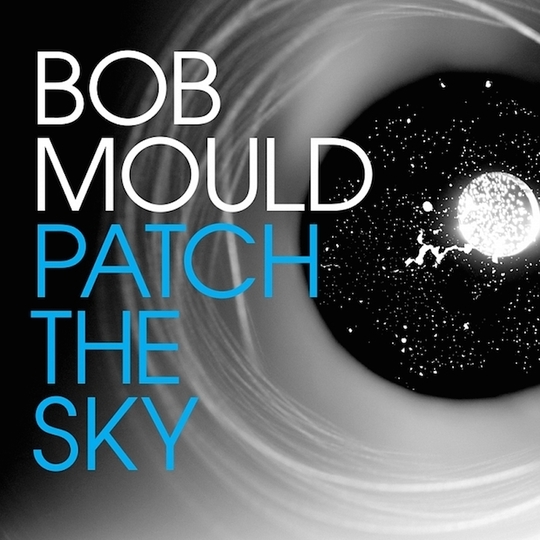 See a Little Light: The Trail of Rage and Melody - Bob Mould’s extolled 2011 autobiography - conjures up feelings of loss, betrayal, love and confusion, but the prevailing notion is most definitely ‘integrity’. Even reading the press release (something which is becoming increasingly more arbitrary) for this record, Bob speaks frankly and openly to whoever is on the other end, as he has continued to do so through his music over the years.

Patch The Sky comes on the back of a wave of musical highs, but being Bob Mould, critical success is rarely a product of personal fortune.

Everything has been turned up on this latest record; the melody, the distortion, the sadness and the resolve. Not one to shy away from the darker side of life, the subject of suicide has shown up before on Mould records and has caused plenty of concern in the industry. In a discussion with Ryan Adams, Bob opens up about the album’s title and how figuratively, those who leave his life blast through the sky, and at times he has contemplated following them through the void.

‘Voices in My Head’ opens the record with swirling, modulated noise before a resounding open chord signals the start of the story. Search the Mould discography and you’ll find records that comprise acoustic ballads, straight up pop, electronic experimentation and grunge, but the constant running through all of them is melody. The same is evident on the opener here; an introspective rock number that despite being one of the lighter numbers in terms of tone, has enormous weight in terms of sentiment and summarising the six months of isolation he took writing this record.

As the album progresses, Bob throws out hook after hook on tracks like ‘The End of Things’, ‘Hold On’ and the hypnotic ‘Losing Sleep’. Throughout his time with Hüsker Dü, Sugar and as a solo artist, Bob Mould has shown himself to be a songwriter of unending talent, drawing admiration from his own inspirations, like Peter Townsend, to Dave Grohl, Peter Buck and countless others who are indebted to Bob’s music.

There will be claims that musically Patch the Sky is built by riffs that occur naturally to a veteran like Mould, but this isn’t an album to be taken on face value. His vocals, like on early works New Day Rising and Zen Arcade, are buried in the mix; you have to want to explore the themes and relate to the lyrics within the distortion. On the surface it’s catchy punk pop/rock, but for those who identify with the stories behind this set of songs, there is a real depth to be explored.

Working with Jon Wurster and Jason Narducy has undoubtedly steadied the ship: throughout his various guises, Mould has always performed best with a band who are competent and on his side. The low-end of this record is tight and punchy, allowing the vocals and guitars to collide and compliment each other in the higher frequencies.

Patch the Sky is undoubtedly the record of someone not only haunted by their past but also the continuing difficulties faced in the present, but it is also a stunning example of Bob Mould’s resolve and ability to channel life, death, love and failure into two sides of meaningful and melodic music.