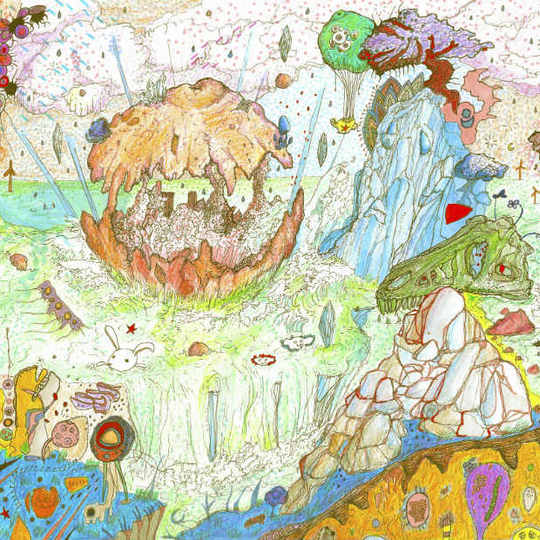 I imagine that for artists of a certain vintage to be compared favourably to The Beatles, Jeff Buckley and Lift to Experience would be at least pleasing. Even for the most 'comparisons are lazy, my music doesn't sound like anybody else' kind of musician, to find themselves in this position could only be positive. It should certainly pique the interest of a wide swathe of potential listeners. So imagine then if these aforementioned favourable comparisons are applicable to one song on the supposedly 'difficult' second album in a nascent career. That should set listeners positively salivating, no? Well, on 'Pink Fruit', the second song on Grapefruit the simply stupefying Kiran Leonard pulls off such a trick. Not exactly your archetypal radio single, clocking in as it does at around 16-and-a-half minutes, this astonishing piece of work is held together by a recurring vocal hook about a pink fruit, but contains so much glorious musicality that it's not even easily possible to pick a favourite section. By the time a choked 5/4 instrumental passage that wouldn't have been out of place on Hail To the Thief finally wends the song's way towards its climax, submission is the only answer.

Already known as a singular talent with the release of his previous album Bowler Hat Soup on the wonderful Hand of Glory, and much championed by BBC 6Music, particularly Marc Riley, who called Kiran and his band 'the pretenders to the best band in the world crown', Grapefruit is the album where the caterwauling creativity of Leonard's songwriting is fully harnessed with his exceptional live band and distilled in to a coherent and cohesive musical statement. Before we get to the majesty of 'Pink Fruit' the album begins with the deceptive prettiness of 'Secret Police' with its sonorous piano, before the full power of the band is unleashed. It is equal parts country-tinged jazz and full on orchestral rock, cinematically-scoped in its ambition. That it does so much and yet, conversely to the track that follows, is all over and done with in a shade over two and a half minutes says a great deal. This is the kind of radio single musically intelligent people dream of listening to.

'Öndör Gongor' has the unenviable task of following 'Pink Fruit'. It is a furious song, the kind that again surpasses the best that Buckley had to offer. I have to admit that I can't work out whether the chorus hook tells us that heaven is a hungry 'whore' or 'horse', but to be honest, either would feel entirely believable coming from this record.

And on it goes. 'Caiaphas in Fetters' is a delight of a song, largely acoustically based, while 'Don't Make Friends With Good People' features the most conventional chord progression of the whole album in its opening section. This, on an album like this, is a noteworthy element. Of course, after about a minute, it all breaks down to a squall of math-rock riffing, because, well, why not? 'Exeter Services' is a fast moving energetic rock song, surely the most passionate response this place has ever engendered. 'Half-Ruined Already' shows a whimsically beautiful side to Kiran's songwriting, before closing track 'Fireplace' unfolds over an epic ten minutes, recalling the best elements of opener 'Secret Police' and and ending the album on a suitably high note.

So, how to sump up this record? I'm not sure it's possible. It's an album which is best enjoyed in one sitting. It rewards concentrated listening. It showcases a songwriter who, at the age of 20, has already realised more potential than most many more storied artists pack in to a 25 year career. If you find yourself dismissing the album as a cluttered mess, listen again, you're not doing it right. All hail Kiran Leonard (and his astonishing band). Grapefruit is fabulous. It is challenging and it is fun.