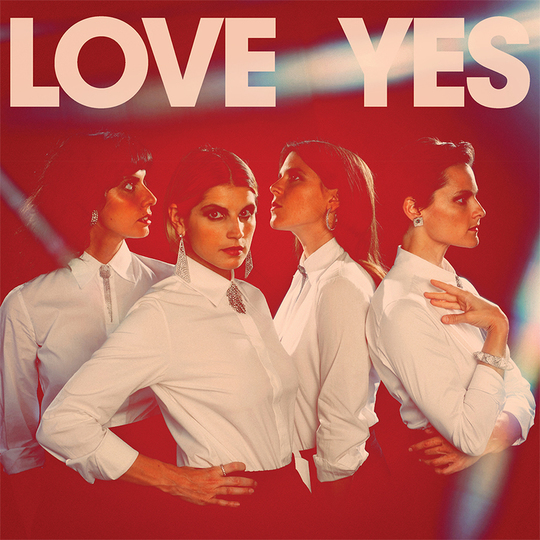 Art-pop is probably a contradiction in terms and a pretty unhelpful label to put on any artist, but it seems to be the kind of realm Kristina ‘Teeny’ Lieberson finds herself lost in.

Originally cutting her teeth playing keyboards with dreamy leftfield New York indie types Here We Go Magic, she teamed up with sisters Lizzie (keyboards, vocals) and Katherine (drums) back in 2010 (and latterly bassist Bohsra Al Saad) and conjured up a mix of all-girl harmonies and synthy melodies that screamed stylish, summer bliss. The obvious, lazy comparisons to Haim and Warpaint didn’t tell the whole story though and with Pete ‘Sonic Boom’ Kember (Spaceman 3) as producer, debut album In Limbo (2012) had traces of garage psych weirdness and Krauty backbeats.

The influences evolved to include the jaunty, offbeat quirks and rhythms of Talking Heads on The Way and Colour (2014), and now TEEN dive head first into a vat of high gloss Eighties synth-pop shimmer on new album In Love. No keytar is safe as the ladies indulge in retro futurism and morph into something resembling Robert Palmer’s ‘Addicted to Love’ backing group with Roxy Music production sheen and lush power-pop falsettos. You can taste the hairspray.
br>

What makes their take on the era interesting is that they also remember the eccentric, oddball streaks of acts like Devo and Sparks. Opening track ‘Tokyo’ is a pouty piece of glitzy, flirty electro-pop that struts along making eyes at you and whispering sweet naughtiness in your ear, until sudden surges of squealing android yelps and digital dirge throw a surprise curve ball. That playful trait and their tendency to wander off down strange sonic paths puts them closer to the strutting theatrics of Goldfrapp than the more sincere, straight laced persona of someone like La Roux – and they’re all the better for it.

The high point is the glitchy surrealism of ‘Free Time’ in which the ladies seem to become robotic, Stepford Wives mannequins and start rapping about their urge to escape suburban monotony. The questioning of whether to break with conformity and follow your desires is a theme that rises again on the breathy, androgynous ‘Superhuman’ - “Why must I be denied all my pleasures for one I know so much?”, but most moving is the R’n’B ballad ‘Please’ on which Lizzie tries to imagine the one last heart to heart with her recently deceased father - “Not a woman, not a girl/ I feel like a child running through my backyard/ I can see the woods, with my father standing in the doorway/ What did he see that I cannot believe?/ What kind of a woman did he think I could be?”

The saccharine, symphonic sugar rush of it all does reach diabetes-threatening levels on the fairground swirl of ‘Noise Shift’ and the overall lack of big, crowd pleasing choruses might dampen the chances of crossover success, but Love Yes feels like a radical step forward for the Brooklyn-based group. It’s a coming of age struggle wrapped in the slick, veneer of Eighties glamour, and ultimately TEEN’s synth-pop dreams are hard to beat.