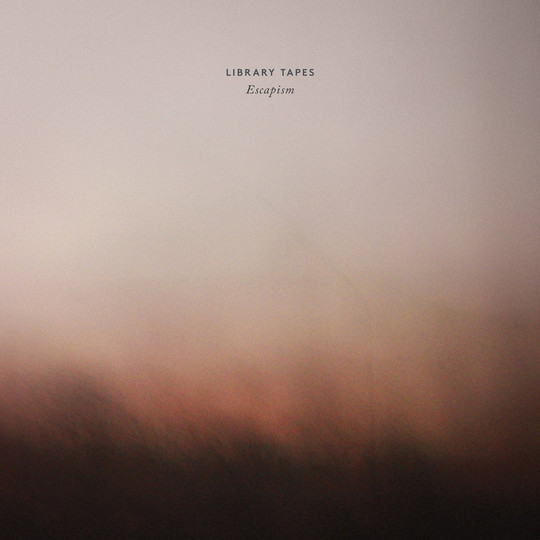 From a certain frame of reference, the word ‘escapism’ carries a negative connotation, the word implying that it’s more dignified to remain within whatever it is that’s being escaped from. But it’s regretfully negative: a connotation that, by and large, we accept. With the almost zero-steps ease of sharing your experiences with the rest of humanity, there are, at all times, billions of windows into which an escape-ready consumer can gaze. And for the most part, even the most cynical futurists among us are just as apt as any to jump down a YouTube rabbit hole or to lurk-and-judge their high school acquaintances as anybody.

Which makes it strange that Library Tapes’s latest effort is entitled Escapism. The work does not possess the characteristics that one would instinctively associate with ‘escapist’ efforts, ie it takes effort to appreciate. All ten tracks are mid-tempo to positively slow, driven by Library Tapes progenitor David Wenngren’s ponderous piano and/or Julia Kent’s morose cello. With the exception of 'Introduction II', which considers a single melodic idea for a rather fully-wrought 2:16, each track ends long before you think it will. Perhaps Escapism’s most conventionally ‘escapist’ aspect is its slightness; ten tracks in 25 minutes is a lot closer to bite-sized than one would expect from a classical album.

As each track loads up like an epic and ends as a passing impression, the listener is left with the sense of too-shortness. But it’s not a frustration; it feels distinctly thematic. 'A Summer by the Sea I' (which comes after 'A Summer by the Sea II'), opens like fertile ground for a long, complex composition. It feels like a glimmer of sunlight through coloured glass. But before we see what the rest of the building is like, how the sunlight would play off the wood or the carpet or the bedframe, before any contrasting melodic or rhythmic ideas are introduced, the song ends, giving way to the darker, even sparser 'Silhouettes'. Perhaps, then, ‘Escapism’ refers to the author: it’s the song escaping from itself, or the author escaping from the indulgence that fertile ground seems to beckon.

The listeners’ escape comes from the consistently melancholic mood. It carries you to a series of other places, a series of short, steady moments, where it’s clear how you should feel, and it’s clear you won’t feel that way for long. But ultimately, there is a need in the listener for more. The singularity of Escapism’s mood and voicing is alternately an interesting subject of thought and a bit of a drag. The mission of the project seems to be to achieve a steadiness, a simple equilibrium, a sonic centre with minimal variation. And it happens. But the more and more central the mood grows, the more I find myself wishing for another voice, something a bit more whimsical to—ahem—escape the overriding solemnity.