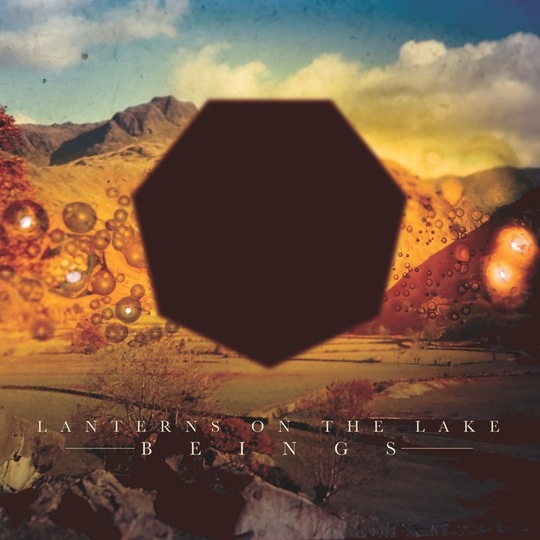 There's something glorious about listening to an album which sounds coherent, cohesive, in which all of the songs make sense individually and within the context of the whole. Sure, there might be standout moments, but the deepest satisfaction is derived from taking in the piece as a whole. Sadly, this is all too rare in my experience, but at least with Beings, the new album from Newcastle sextet Lanterns on the Lake, the latter part of 2015 has been graced with one such artistic statement. If you're on the lookout for songs to consume in a fit of musical gluttony, this album isn't for you. Instead it's a succulent, sumptuous repast to be savoured.

Things begin with 'Of Dust and Matter', a spectral, piano-driven opener which nods plaintively in the direction of the peerless Her Name is Calla. From there, 'I'll Stall Them' slinks in on a bed of ambience and nicely placed brass. The whole ambiance, particularly the vocal placement in the mix, calls to mind the soundscapes which carried Daughter to ubiquity on the release of their debut album. Lanterns on the Lake have reached the point where they sound ready to make the jump on to similar echelons. The glorious dynamic shifts in this song, as crescendos come and immediately fall away again, are a thing to behold.

Other highlights here are 'Send Me Home', shorter but no less substantial, as lead vocalist Hazel Wilde really comes to the fore. This track gives way to 'Through the Cellar Door', which asks “are you one of us?” as it explodes in to the album's first truly aggressive, even explosive moment. Snare hits punish as layers of guitar underpin a cinematic lead line. The effect is exhilarating. That the band can change gears so effortlessly is a sign of their maturity, musicality and, more than both of these, their complete togetherness as an entity. As the title track moves glacially into view, undulating purposefully through its verses before falling apart in to a beautifully understated chorus, it feels like we who are listening have been carried away from the humdrum of the everyday to another place entirely. Isn't this what only the best music can do?

Then, as if almost just to be wilful for the sake of it, we are brought to the place of 'Stepping Down' the album's most obviously electronically-infused moment. Using an almost entirely different sonic palette, it is testimony to the splendour of its composition that this track fits perfectly in to the flow of the whole album. And this, ultimately, is the point. Lanterns on the Lake are at a stage in the genesis of their band that it would appear that almost anything is possible for them. The steps they take in the months and years to come promise to be fascinating. Listening to Beings though makes one thing abundantly clear: Lanterns on the Lake are one of Britain's most crucial bands of the present moment.