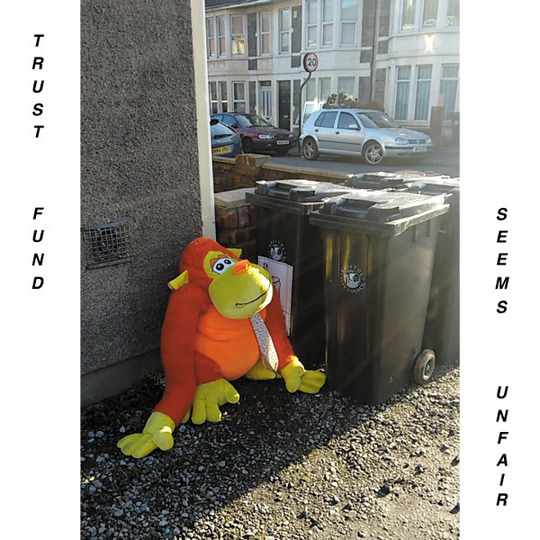 Two albums in eight months is good going. Two great albums in eight months is exceptional. This is exactly what Ellis Jones aka Trust Fund has done. In February he released No One's Coming for Us. It was 30 minutes of devastatingly simple lyrics, that had the added punch of Jones’ ability to tap right into the us and make his experiences feel like ours and vice versa. This was backed by a rag-bag band of musicians and friends who jumped from jangling pop to walls of DIY noise as the songs dictated. It was nigh on perfect debut album. Now he’s returned with Seems Unfair, again released though those good people at Turnstile.

After a first listen it appears that a lot of the songs were written personally for me. Jones has retained his knack of being able to, effortlessly at times, conjure up images and feelings from the past with a simple turn of phrase, or delivery of a lyric. ‘Football’ more than any other song on the album feels like it was genuinely written for me. I’m still in contact with some of my friends from school. This is possibly down to two factors. Firstly we’ve known each other for so long it seems pointless to stop acknowledging each other’s existence, and secondly they still live close to my parent’s house and it’s easy to see them when I go home. Due to being adults now, the interests that drew us together as children/awkward teenagers has widely been from our lives. The fear of detention, hoping to do well and get in a school sports team, worrying no one ‘hard’ will come to our house parties and trash our parent’s house but one thing has remained and is our go to subject of conversation when we’ve run out of things to say/ask about our jobs and parents. Jones sums this up perfectly with the line “When you stop feeling weird in 10, or 12, or 15 years, what will we even have to talk about? Football!" This lyric sums up my relationship with over a dozen people far more eloquently and, sadly, more accurately than any other I can think of.

Through a nasally falsetto Jones points out promises we make to ourselves that we break on ‘Michael’s Plan’. It’s more like when a friend enquires 'Do you still do so and so?' with the inevitable answer being 'not anymore sadly'. Jones isn’t being judgemental or condescending, he’s just curious, as you used to enjoy that activity. 'Mother’s Day' perfectly sums up how you feel when either your parents, or a friend’s does something to help you out for no other reason. Opening line “It was so good of your mum to drive us so far” sums this up perfectly. Musically it’s particularly raucous and frayed, but it all gels well and creates one of the album's stand out moments. The chorus of “Just to help us out” is the icing on the take. ‘Can You Believe’ closes the album on a slightly melancholic vibe. But Seems Unfair doesn’t end on the downer you might expect thanks to the juxtaposition between the slightly lugubrious lyrics and the upbeat jaunty music which is Jones’ trade mark, and a fitting way to end such an album.

Seems Unfair not only trumps No One's Coming for Us lyrically, but musically too. Yes the comparisons for Waxahatchee are still there, but now Jones feels more comfortable and confident with his style of song writing and is starting to come into his own. Songs like ‘Seems Unfair’ and ‘Sacred II’ also show his ability at melody, and also the less is more school or composition. They suck you in through seemingly simple chord progressions and riffs, but there is a level of complexity just bubbling under the surface that makes repeat listens a joy. Trust Fund are a band that know exactly where they want to go, and more importantly, how to get there. All their initial praise and hype is seems to be totally warranted. All that seems unfair is that we’ll have to wait 2016 for the next instalment of the Trust Fund saga.

Return to the Moon

I Am A Problem: Mind in Pieces