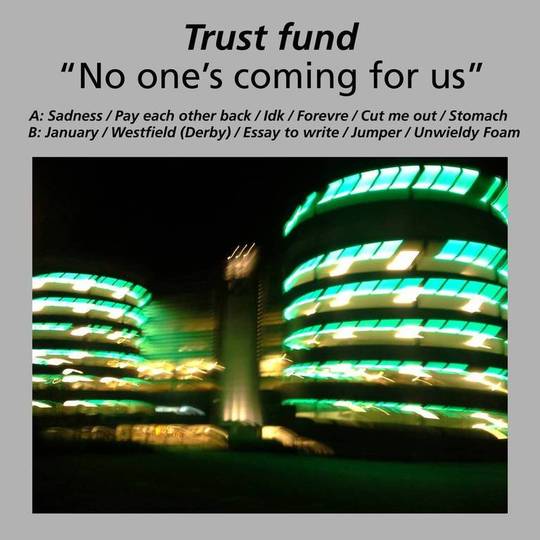 In the short time he’s been releasing music as Trust Fund, Ellis Jones has already accomplished a lot, with his excellent EP Don’t Let Them Begin and a show-stealing spot on a split 12-inch with Joanna Gruesome the main highlights. His growing reputation as one of the most gifted new artists around has rapidly developed thanks to his uncanny knack of tapping right into the hearts of his listeners with the rawness of his songs. This saw him sign to Turnstile (Gruff Rhys, Cate le Bon), go on tour with Los Campesinos! and pop up on various ones to watch in 2015 lists, meaning that debut album No One’s Coming for Us is probably the first Trust Fund release to arrive encumbered by something of a weight of expectation.

Jones has been an active contributor to the DIY scene in his home city of Bristol and beyond for some time, and it appears that No One’s Coming for Us has been constructed in this spirit. Much like his earlier work, the majority of the album was self-recorded, with a rotating cast of the friends who constitute the Trust Fund live band pitching in to flesh out the recordings.

While Trust Fund is a collaborative project, it’s Jones who dominates these songs. His lightness of touch is captivating, softly tapping away at you with his words so you barely even notice how heartbreaking these songs are until they’re catching you unawares on the bus or in a supermarket queue. ‘IDK', the lush duet with Roxy Brennan is a prime example. One of the sparsest songs on the album in terms of instrumentation, it’s also probably the most affecting. The way the pair deliver their back and forth “Will it come back the same again? / Not really / Was it something I did or said? / No, not really / How long will you remember me?” is quietly devastating, and it’s one of dozens of examples of the power of these songs.

It’s clear throughout how well Jones understands the effect of directness and simplicity, but understanding this is one thing, it’s the way he uses these tools so nimbly that makes this record so potent. ‘January’ illustrates this, bobbing along on a buoyant little melody with Jones softly singing “Seems like all our friends are having such a bad year” until the song bursts into life when he bitterly spits “And it’s only January”, in the process encapsulating the defiant melancholia which permeates No One’s Coming for Us.

The oft-made comparison with Waxahatchee is an obvious one, but no less valid – like Waxahatchee, Trust Fund crank up the noise only sparingly but as they’ve already shown on first single ‘Cut Me Out’, when they choose to, they’re in possession of a pretty strong arsenal of riffs. We see it on ‘Jumper’, too, when Jones softly murmurs “Millions of times in this park we have spoken / In the rain I laid my head on your lap and I said it was over / I am pulling the sleeves of my jumper up over my hands / In order to hold you” before the song is engulfed by a wall of hefty distorted guitar.

The album ends on a wistful note on ‘Unwieldy Foam’, which is built around another of those melodies Trust Fund make seem so simple. Like a lot of what has gone before, it’s a poignant tale of what might have been, presented so matter-of-factly as to leave it up to us to decipher the emotion within. There’s no need for histrionics or over-emoting, because these songs are more than capable of speaking for themselves.

With No One’s Coming for Us, Trust Fund have added to the enviable body of work which is currently being built by the burgeoning DIY scene in the UK. Like their contemporaries Joanna Gruesome, Martha, and Tyrannosaurus Dead, they’ve produced a vivid portrait of the lives of the people behind its creation. It’s a piece of work which is brimming over with sadness, vitality and no little humour and the end result is a truly excellent debut album.