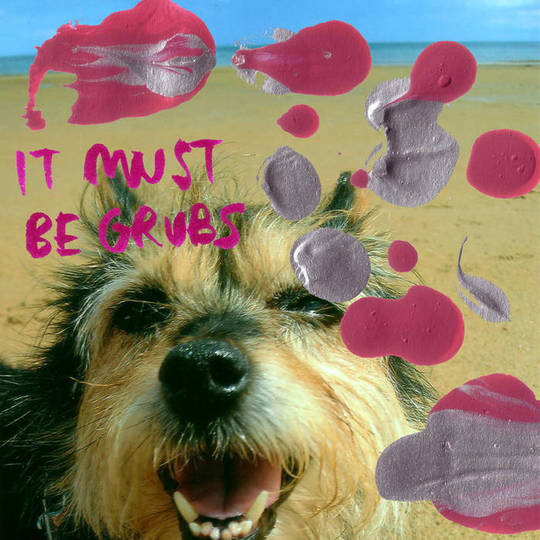 One of the best things about the DIY community is the sheer number of bands it accommodates. The spirit of collaboration and creativity is so strong that people will frequently be juggling three or four different projects at once, which is pretty great if, like me, you happen to into that kinda thing. Grubs are the perfect example of this multi-tasking, with the personnel who make up the trio counting Joanna Gruesome, Two White Cranes, Caramel, Towel and several others among their previous and current projects.

Much will probably be made of the short running time of It Must Be Grubs which is over and done with before 19 minutes have elapsed. However, it doesn’t really feel like there’s any need for it to be any longer, because Grubs seem to do pretty much everything they want to in this time. The songs are all short, but they’re never anything less than fully formed. In a weird way, the album seems to feel longer than it actually is, and I suspect that’s simply because it’s difficult for the brain to accept the idea that it’s absorbed such a well-constructed set of eleven pop songs in such a short space of time.

If you’re familiar with the previous work of the members of Grubs, you’d probably be able to take a reasonably accurate guess as to what they’ll sound like. The scrappy, sweet pop music they make is a path well-trodden but it’s no less valid for that because it’s so beautifully put together. To be able to put together such sharp, hook-heavy pop songs and make it all seem so effortless is a knack which defines the best indie-pop bands, and it’s definitely a strength Grubs posses. The record’s opening track ‘What Cost’ is testament to this, with its breezy riffing supporting Roxy Brennan’s descent into angst-laced hollering. Like ‘Dec 15th’, and indeed much of the rest of the album, it’s proof of what the trio are able to achieve musically with pretty elemental ingredients.

It’s a similar situation lyrically too. Just like Ellis Jones, the chief protagonist of another of her previous bands Trust Fund, Roxy’s voice is at its most emotive when it’s at its most offhand. ‘Work in Progress’, for example, is one of the album’s best songs and that’s partly down to the so casually delivered self-dissection: “I have some words to be writing / I have stains on my jeans / The clothes on my bedroom floor have been there since January”. ‘Tendons’ is the same story - a song apparently bemoaning dodgy knees which comes off poignant without seeming overtly so on first listen.

For its moments of emotional heft, there’s clearly a quite major playful element to It Must Be Grubs too, from its punnish title, its happy dog artwork, and its Principal Skinner from The Simpsons references. While Grubs might not take themselves too seriously, that’s not to say you shouldn’t because their record is one of the liveliest and most enjoyable debuts of the year so far.