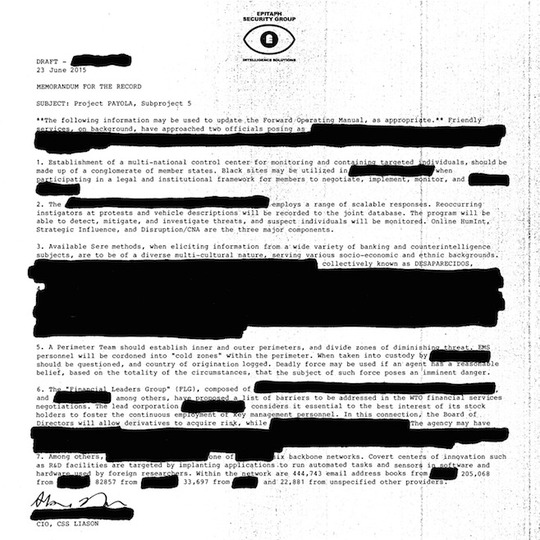 There is a lot going on in Payola, which arrives 13 years after Desaparecidos’ scuzzy, raging and quite brilliant debut album Read Music/Speak Spanish. That’s to be expected: the group actually reunited five years ago to play a concert in their hometown of Omaha, Nebraska, held in defiance of a draconian anti-immigration law being quietly ushered into the state. New music came a few years later, in the form of self-released 7-inch ‘MariKKKopa’/‘Backsell’, the former of which takes on brazenly racist and corrupt Arizona sheriff, Joe Arpaio. I sent some questions to bandleader Conor Oberst via email around that time, who stated:

Just look at the growing disparity between the rich and poor worldwide. The senseless never-ending wars all over the world to preserve this paradigm. I guess that is why it has been so easy for us to fall back into the groove with the band and why we decided to make new songs. There is still a lot to say on the subject.

The subject is modern western capitalist society, and in the years since Read Music/Speak Spanish was released (the album was recorded almost immediately after 9/11), Oberst’s declaration that ‘the situation is only getting worse’ rings painfully true. Sheriff Joe Arpaio still presides over Maricopa County. Edward Snowden remains wanted on criminal charges by President Obama’s administration, even as the USA Freedom Act - an act that arguably wouldn’t exist as it does were it not for his actions - is not only passed but trumpeted by the White House. Racial profiling and injustice, whether that be on an international or individual scale, reaches new levels of horrifying seemingly by the day. Meanwhile, a generation raised on social networks responds with ‘likes’, comments and for the most part, little else.

Now that’s a pretty long-winded introduction, and it also implies that Payola is maybe, you know: a bit of a drag to listen to. It isn’t. While it addresses all of these issues - and several more - in a manner every bit as serious and thoughtful as they deserve, it is also an absolute blast. At 14 songs (including the six that have trickled out over the last couple of years) it is maybe a touch overlong, and not everything on it hits as hard as the likes of ‘MariKKKopa’. Yet, it is enormously, invigoratingly enjoyable. ‘Impossible to not feel completely triumphant walking around listening to the new [Desaparecidos] album,’ tweeted Har Mar Superstar recently. Friend and collaborator of guitarist Denver Dalley he may be, he’s also right on the money.

From the moment the guitars and synth crash in on ‘The Left Is Right’ and Oberst opens proceedings in the first-person plural by loosely chronicling the Occupy movement, it is clear that the band are as sharp and incisive as they ever were first time round. The song has, admittedly, been out there a while now, but it sounds heftier here, at the head of an album: a statement of intent for a work that is never anything less than utterly impassioned.

‘Golden Parachutes’ is Payola’s first real knockout moment. Guest singer Laura Jane Grace’s truncated yelp heralds the song proper, while her trading lines with Oberst as the pair spray bile over the culture of privilege is a joy. ‘MariKKKopa’ bucks, kicks and revels in turning the ugly, hateful language used by its targets against them, and ‘Te Amo Camila Vallejo’ is even better. A fiery love letter to the Chilean student leader turned member of congress, it suggests that although we might be pretty fucked on the whole, brave and inspirational figures espousing ideals worth fighting for will rise, and more will rise with them.


Desaparecidos have been presented, both in their press releases and on several websites reporting their reunion, as ‘Conor Oberst’s Desaparecidos’, which is fine and understandable, but slightly misleading. The band cite peers such as Cursive and Weezer (Tim Kasher of the former also guests here, alongside the So So Glos) to heroes like Pixies, the Clash (whose ‘Spanish Bombs’, fittingly, they often cover live) and Rage Against the Machine as informing their sound. Further influences can be felt here, from ‘80s punks Cro-Mags through a new wave streak most readily felt in Ian McElroy’s sparkling contributions on keys. It’s a potent cocktail, and one that the group make their own. Oberst’s bracing presence is key and integral, of course, but the group’s identity really is a group identity, each member bringing something unique to the mix.

There is a lot going on here. And though Har Mar has it right regards it being an enlivening work (it ends, pointedly, on a rallying cry), something else bleeds through after a few listens. Payola at its very best - as on ‘Ralphy’s Cut’, for example, which examines the failings of the healthcare system via its terminally ill protagonist, or ‘10 Steps Behind’, which acknowledges that there are certain Islamic notions the western world will never, ever comprehend - offers great, lumbering beasts of songs, their punk-rock spirit shot with melancholy.

As such, it doesn’t quite retain the piss and vinegar, lightning-in-a-bottle feel of its predecessor. But then of course it doesn’t: that album was turned out in a matter of days by much younger musicians, while this release spanned years and several recording sessions and it’s still absolutely exhilarating. There aren’t many bands that would detail a song with the fantasies of a teenage gun obsessive, relate to a radicalised youth or launch a scathing attack on the Fairview Surveillance Programme. That Desaparecidos accomplish these things in the form of such frequently brilliant, perceptive tunes is laudable. In what has become something of a running theme this year, it is, simply, a pleasure to have them back.