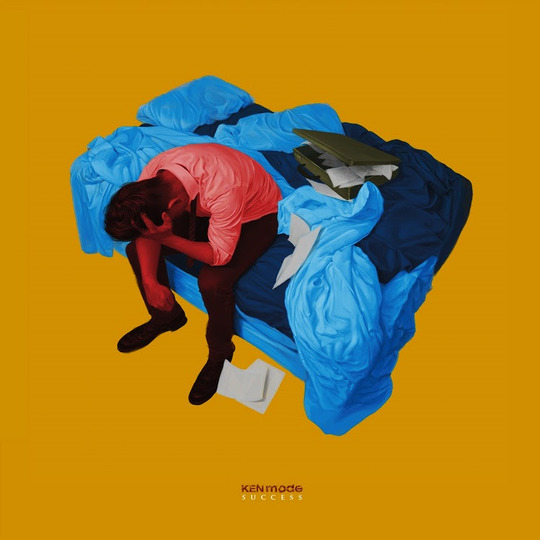 Success begins with a peal of feedback, merging into an ugly sea of typically sludgy, bass-dominated, downtuned riffs. So far, so KEN mode. The Manitoban trio have been releasing records for over a decade now, making a name for themselves in the underground with ludicrously heavy doses of off-kilter hardcore-infused noise rock. Success sees them take the obvious – if hardly ill advised – step of working with Steve Albini. I figure it’s something they’ve probably always wanted to tick off the band bucket list. It’s certainly fair to say that, when Jesse Mathewson’s vocals arrive about a minute in – with the purposefully sarcastic declaration of “We can play this game a little bit longer, but we all know we’re not really welcome here” – the rather large debt KEN mode clearly pay to Albini’s work becomes fairly obvious.

There’s no shame in this. Big Black and Shellac are surely the two most influential 'noise rock' groups there have ever been. Hundreds of bands have sounded like them, and in all probability so will hundreds more. Who can blame them? When a shadow that large looms over an entire subgenre of music, it’s hard not to be influenced by it, let alone ignore it altogether.

The thing is, KEN mode have largely managed to avoid slipping into neat categorisations in the past. Entrench, from 2013, the trio’s Season of Mist debut, was certainly ferocious and scornful in equal measure, but in being so it hopped vigorously between a variety of approaches. It was back-breakingly heavy, partly because of the undeniable emphasis on crunching guitars and thanks to Mathewson’s highly convincing guttural vocals. It was also a restless beast. With the exception of two more mid-tempo excursions – namely ‘Romeo Must Never Know’ and ‘Monomyth’ (the latter was actually rather beautiful) – the band also kept their foot to the floor. This is where KEN mode were at their best.

As a result of their willingness to embrace hardcore and metal, KEN mode didn’t really sound like anyone other than KEN mode; if you will insist on comparisons then Old Man Gloom on a less expansive scale might be appropriate. Here was a band that were clearly embedded in the long – and far more diverse than is often assumed – lineage of noise rock, but who had the wherewithal to construct a denser, more oppressive sound than many of their peers. On Success, however, this is largely absent. There are moments of brilliance: the wonderfully coarse ‘These Tight Jeans’, the monumental ‘Management Control’ and the superb closer ‘Dead Actors’.

However, there’s very little here that sounds like a natural continuation of KEN mode’s sound. More frustratingly, not only is there a constant air of Shellac but also of more contemporary outfits like Seattle’s Helms Alee, for example. By exorcising the brutality that has been so integral to their finest moments, KEN mode have also exorcised a lot of their own distinctive character. The aforementioned opening moments of this record are about as heavy as Success gets, and once it becomes clear that the bass is going to do much of the talking and the vocals are going to be more snarled than growled, it’s also obvious that Success is going to be more recognisable as a record produced by Steve Albini than it is as a KEN mode album.

Thus, although Success is a very solid album, from a band that have already proved themselves consistently capable of churning out suitably bad-tempered and obtrusively loud material, it’s hard to feel it’s anything we haven’t heard before, which makes it far more underwhelming than its generally high quality content suggests it should be.