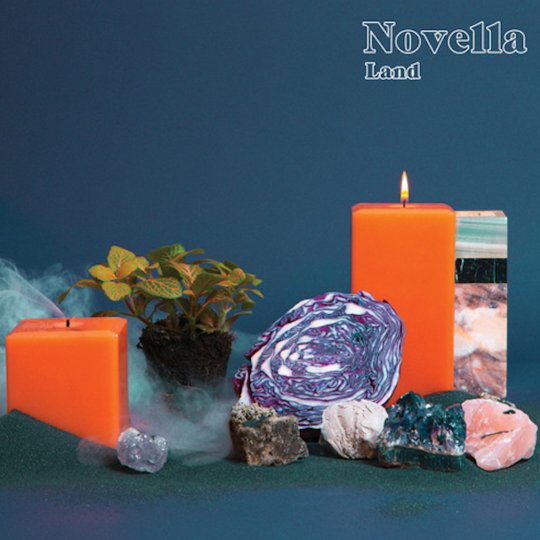 London-based quintet Novella have been a regular feature on the capital's live circuit since forming five years ago. Initially conceived as a three piece, core members Hollie Warren (guitar/vocals), Sophie Holington (guitars) and Suki Sou (bass) fused krautock sensibilities with Velvet Underground influenced melodies to great effect. While 2011's 'The Things You Do' hinted at a wealth of possibilities for the future, their next two releases the following year and first to feature drummer Iain Laws - May's Novella EP and November's 'Mary's Gun' - suggested their elevation to the resurgent psych rock premier league was imminent.

However, it all went a little quiet from hereon in, and although a limited edition cassette (the Murmurs EP) was issued in October 2013, very little has been heard from Novella since. Thankfully, it seems that time away from the public eye has been well spent. Regrouping with new keyboard player Isabel Spurgeon on board, the band spent the early part of last year recording then putting the finishing touches together for their long awaited debut. Fast forward another 12 months and Land is finally here in all its esoteric glory.

Recorded under the combined tutelage of Jonas Verijnen – whose previous credits include Moon Duo and Ballet School – and The Horrors' Joshua Hayward, Land ably demonstrates the band's progressive nature across its ten pieces. Whereas many of their peers have fallen into a trap of regression and predictability, Novella have clearly grasped the mettle to boldly craft a record that's both elementary and experimental in format and structure.

While The Horrors connection doesn't end there - the recently added keyboard player's brother Joe happens to be their drummer - it would be incredulous to suggest Land is firmly indebted to them or any other band for that matter. Sure, valid comparisons can be levelled in places. For example, the dense textures on 'Something Must Change' rival Loop in their Fade Out phase, while Warren and Hollington's vocal interchanges recall Miki Berenyi and Emma Anderson of Lush at their most effervescent, particularly on the pensive 'Sentences' and reflective 'Again You Try Your Luck'.

What's most interesting about Land is how Novella's development can be traced through the inclusion of three tracks from Murmurs. The lead song off that EP 'Blue Swallow' (then titled 'Blue Swallows') takes on an altogether new persona here. Opening with a fractured drumbeat that echoes the one used by The Beatles on 'Tomorrow Never Knows', it goes on to encounter a series of twists and turns over the next five minutes, rendering it Novella's most ambitious creation to date. Likewise 'Phrases', formerly an instrumental on the 2013 EP. Mesmeric and dreamy in parts, galloping in others. "I can't do the things I used to..." declares Warren as poignancy fills the air. Album opener 'Follow' also gets a makeover here. Tucked away as the third track on Murmurs a year-and-a-half ago, it finds itself revitalised as the driving force and guiding light into Land's unchartered waters. Both pulsating in delivery and haunting in execution, it sets the scene incisively for the rest of the album.

Of course there will be murmurs (pardon the pun) that Novella may have missed the boat. That Land's gestation period could have been realised a tad earlier. But then that could also work in the band's favour, as rather than get trampled among the umpteen psych rock releases this past year, they've delivered a record that stands alone and away from the crowd. Only time will tell what the next instalment holds, but for now Land is a fitting document for the first chapter of Novella's fascinating evolution.