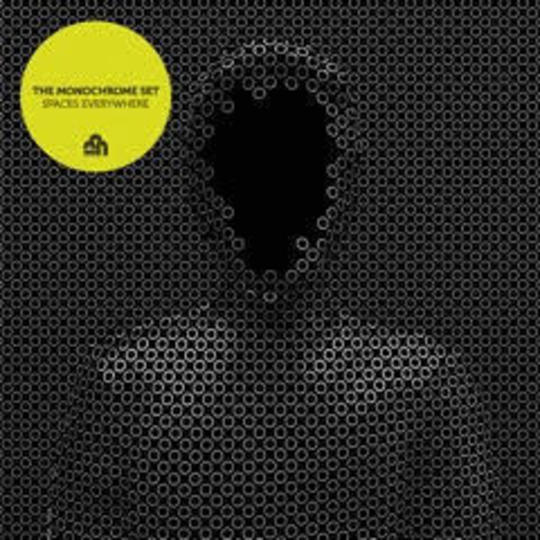 Ten years after the peak of its revival in modern indie, early 2015 has been a hotbed of activity for year zero-ers such as The Pop Group (releasing only their third album in 36 years) and Gang of Four. Slipping way under the radar as they pretty much always have are The Monochrome Set.

Spaces Everywhere is album number twelve for the North London post-punk veterans and their third album since reforming for the second time in 2012. Although emerging in the wake of punk they were more at home in the more humble environs of Eighties indie-pop – a place where DIY mentality and rock classicism aren’t worst enemies and where witty wordplay is best delivered with an arched brow.

The Monochrome Set’s sound hasn’t changed dramatically in the intervening years, moving away from the discordant scratchiness of their earlier recordings to a warmer sound, all clean guitar twang and new wave keyboards that betray a debt to Sixties, rather than Eighties, pop. Opener ‘Iceman’ is as close as they now come to punk urgency with its high tempo, vapour-trail lead guitar and frontman Bid sounding like he’s canvassing on election day, asking “Excuse me, have you voted yet?”. He comes closer to socio-political commentary on ‘Avenue’, with the titular street rendered unrecognisable by gentrification and his battered old fungus-smelling school desk on display in a local antiques shop. If only the accompanying music was as memorable as the imagery instead of an anodyne approximation of psych-rock with overworked Hammond organ and guitars that crunch insipidly.

This sort of bland maturity pervades the album and although Bid can have a wonderful way with words you’ll have to dig through a lot of dirt to find those diamonds. The organ, looping bass and creeping guitar tendrils of ‘Z-Train’ all fall firmly within a familiar rockabilly aesthetic, but together with his vivid and enigmatic lyrics (“ Old salty seadog snoring like an untied balloon, hearing through that soupy pea fog, in his hand a harpoon”) it’s equally thrilling and baffling. On the flamenco style ‘Scream’ Bid’s suave delivery mounts a gracefully ascending chorus melody (I am The Scream open-mouthed in this scene). On ‘When I Get to Hollywood’ the sheer hilarity of Bid’s sense of romance (opening lines “You told him he was beautiful, his eyes were like two nuts upon a plate, and he smelled just like moss growing on a grate... ”) manages to imbue the fairground pop with some real feeling.

However, these intriguing little moments are undermined by the abundance of tuneful yet instantly forgettable pieces of MOR fluff like ‘Fantasy Creatures’ and ‘You’re Such a Star’ and the coffee-house swing of ‘Rain Check’ wherein Bid abandons wit for condescending aphorisms (“… you gotta make your own luck in this world”). When they aim for something more pointedly atmospheric and emotive on the crepuscular pastoral folk of ‘In a Little Village’ the mood is spoiled by the affected mannerisms of Bid’s vocals, which camps things up like The Gothic Archies, stripped of Merritt’s bubblegum pop sensibility. Ultimately Spaces Everywhere is a record that sparkles with little hints of wit, unconventional beauty and musical verve, but they shine so brightly because of the mediocrity that surrounds them.