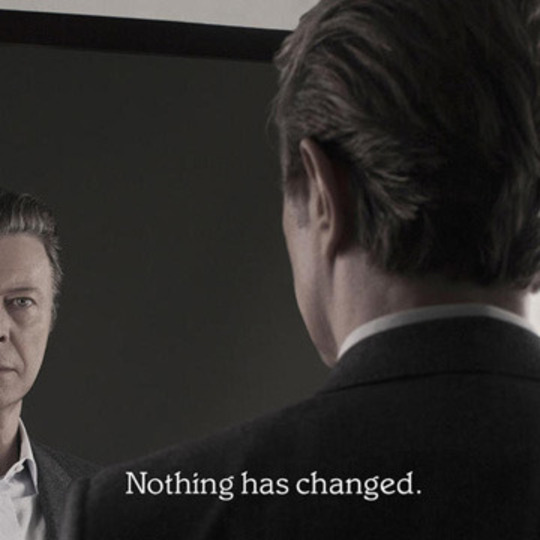 There are now so many David Bowie compilations that they essentially constitute a genre in their own right, with the most frequently compiled songs – ‘Life on Mars?’, ‘Rebel Rebel’, ‘“Heroes”’ et al – now so ubiquitous that to actually describe them using words in 2014 seems pointless. Bowie is probably history’s most unimpeachable singles artist – or certainly was between 1969 and 1983 – and while it is perfectly possible that you’ve never heard any of his songs, the fact is that if you hear ‘Sound + Vision’ you will like ‘Sound + Vision’: it is a biological truth, proven by doctors, probably.

Despite cramming in a walloping 39 tracks on what Wikipedia suggests is Bowie's forty-eighth compilation, nothing really has changed with regards to the 2CD standard edition, which begins with ‘Space Oddity’ and ends a couple of hours later with the expected new song, ‘Sue (Or in a Season of Crime)’. The music is extraordinary, but the format is yer basic pre-Chrimbo best of (and the same goes for the 20-track 2LP).

The 3CD edition, though, stands in total contrast to all that, a statement of self-belief in Bowie's post-superstardom work that surely stands as the most pugnacious best of ever released by an artist of his stature… or would do if he wasn’t also offering such a brazenly conventional alternative. ‘Nothing has changed in the quality of my work’, quoth this Bowie, ‘and to prove it, here’s a 59-track reverse chronology best of album that starts with 21 songs you’ve probably never heard of.’

In this context, that first, seven-and-a-half-minute track ‘Sue’ isn’t so much a gimmicky extra as a line in the sand. A jazzy, atonal, agonised portrait of a marriage crumbling into dust, it is far and away the least commercial single of his career, a Scott Walker-like dirge whose undeniable power comes twinned with the screeching declaration ‘I AM A SERIOUS OLDER ARTIST.’

But really, the next 20 tracks or so are a genuine pleasure, melodious, emotional alt. rock forming the core – ‘New Killer Star’, ‘Thursday’s Child’, ‘Where Are We Now’, ‘The Buddha of Suburbia’ – with just the right amount of curveballs: a pulsing James Murphy dance remix of ‘Love Is Lost’, the gothic fantasia of ‘The Hearts Filthy Lesson’, the bone-rattling V1 mix of ‘I’m Afraid of Americans’.

Bowie is unerringly aware of what his best songs are: ‘Jump They Say’ and Outside’s wondrous closer ‘Strangers When We Meet’ are good as anything he’s done. And he even performs a salvage job on the reputation of 1987’s wretched Never Let Me Down by making its only representation the superb 2008 guitar and violin remix of its best track, ‘Time Will Crawl’.

There’s also three songs here from his unreleased Toy album – as the sessions for it birthed Heathen it’s not really a surprise that they slip in so comfortably, but even so, the quality is pretty stupendous (the euphoric dream pop of ‘Your Turn To Drive’ is particularly wonderful) and their inclusion feel entirely valid.

In fact the only real fault with Nothing Has Changed as a document of Bowie: The Less Popular Years is the omission of anything by Tin Machine. Bowie has always stood by the maligned band, so perhaps it’s the case that he felt it was inappropriate to include their work on a record released under his own name. Nonetheless, it feels like a missed opportunity to shine a light on work that has aged pretty well.

Is it Bowie's best best of? It would be if the reversed chronology ended in ’87. After that this carefully chosen, leisurely-paced record turns into a pretty bog standard, even perfunctory affair. It’s not totally unreasonable to have Low, ”Heroes” and Lodger represented by a single song apiece, but the sense of carefully curated journey drops away entirely for a terse, rarity-free run through the big singles that speaks of compilation fatigue. The music is beyond reproach, but you don't really feel like its maker spent much time thinking about what to include and certainly there's nothing new or unexpected from his peak years.

The sense that Bowie is of the opinion that anyone buying the record knows the Seventies stuff already so, like, whatever is compounded by the compilation's end, wherein the final five tracks dig in to his pre-fame Sixties career with the considered, archival pace of the first disc. None of them are great songs – to the point that he might have well have just been done with it and put ‘The Laughing Gnome’ on – but they’re a worthwhile appraisal of his development, a real sense of journeying back 50 years into the past. There are literally hundreds of better David Bowie songs that his 1964 debut single ‘Liza Jane’, a fun, throwaway skiffle number on which the 17-year-old sings in an unrecognisable cod-American accent. But its inclusion feels right – Bowie's shapeshifting abilities are legend, so it’s only right that this radically different early sound gets a moment in the spotlight.

Have I just spent 1,000 words overthinking a best of album? Sure I have! But as Bowie doesn’t talk or play live these days, reading the runes of compilation track listings is kind of all he’s left us with. Nothing Has Changed (2CD) is a standard pre-Christmas money spinner. Nothing Has Changed (3CD) feels like a defiant milestone, a monument to an extraordinary 50-year-career. But it is imperfect, in a way that makes me hopeful that its maker is more concerned with being reappraised before the next chapter than he is in shutting the book for good.