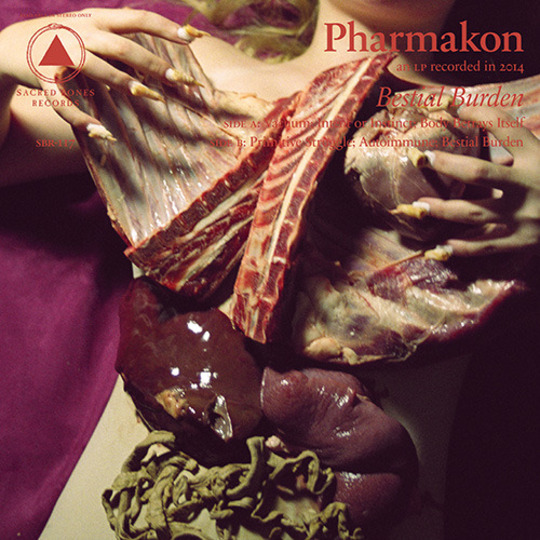 I last saw Margaret Chardiet, better known to the world as Pharmakon, perform live at Brixton Academy a little under a year ago. As support to Godspeed You! Black Emperor, she unsurprisingly faced an audience largely unprepared for the style of sonic assault that is her speciality. Most watched on with a mixture of bemusement and mild disgust, others fled to the bar, and some stood transfixed by the sight of a young American woman producing such a hideous barrage of noise.

Of course, plenty of keyboard warriors out there would say that Pharmakon barely counts as noise at all. This is partly because she is on a hip label (Sacred Bones), and no doubt the fact that last year’s Abandon got positive reviews from several sites that (shock horror) actually cover mainstream music as well as the underground (the cheek of it!). Predictably, the other main reason why Pharmakon has been partially ostracised from the contemporary power electronics scene to which she clearly belongs is precisely because she’s a young American woman.

For those who are unaware, power electronics has always had a problem when it comes to gender equality. The perception amongst many fans is, sadly, that it is ‘meant’ to be performed by men - often bald, or at least balding, shirtless men - for an audience of men (who are often balding and sometimes shirtless themselves). It was bad enough a few years back when handsome young devil Dominick Fernow came along and started getting high marks on Pitchfork. Now Philip Best has gone and married Sarah Froelich (who, coincidentally, is also a young American woman) and made her a part of Consumer Electronics, whose new record Estuary English looks fairly certain to gain more press attention than their entire back catalogue to date. Perhaps the internet noise elite are right, and ‘true’ power electronics is dying a slow death by (partial) democratisation or (gulp), even worse, by the gradual increase of mainstream awareness.

Of course, Chardiet’s music as Pharmakon doesn’t deserve attention and praise purely because she’s a woman (or, for that matter, because she has become relatively successful), but one could argue that her femininity is an important part of her music’s success. Her vocals, which range from despotic shrieks to vulnerable moans, are unmistakably those of a woman; it’s worth comparing this to the few female vocalists present in the extreme metal scene, whose quality is usually judged on their ability to approximate the sound of a male vocalist. Musically, meanwhile, Chardiet is still reliant on familiar genre tropes but there’s less emphasis placed on the masculine qualities that have come to dominate the style in recent years. Militaristic rhythms are muffled and ultimately rejected in favour of claustrophobic noisescapes that creep ominously into the foreground.

Somewhat ironically, one could even see Pharmakon’s sound as a return to some of the modes of operation that made early power electronics a worthwhile exercise. Now a genre ridden with ponderous clichés, from the aesthetic to the lazy reliance on half-baked industrial beats, power electronics could do with more artists like Chardiet, who know that atmosphere doesn’t just come from macho posturing and the occasional squall of feedback. Whether it’s the ghostly synths of ‘Intent or Instinct’ or the disorientating slow motion wave that comes to settle over ‘Body Betrays Itself’, Chardiet’s electronic manipulations are subtler and more thought out than those of many of her peers.

This, ultimately, means that Bestial Burden, like Abandon before it, deserves to be considered as near the top of its class. Much like Copenhagen’s Puce Mary (Frederikke Hoffmeier), who is the only other significant female artist in the power electronics scene that I am aware of, Pharmakon balances noise and confrontation more confidently and coherently than almost everyone else in the ‘scene’ today. To every wannabe Kevin Tomkins or Mike Dando out there the message should be clear: Margaret Chardiet does this stuff better than you. A cause for celebration indeed.