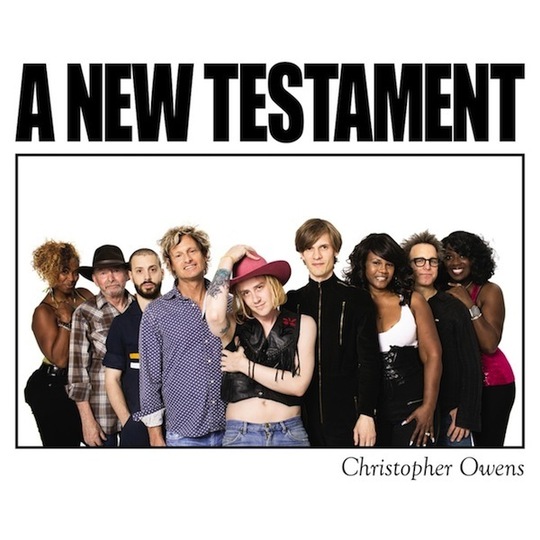 Girls were a big deal, weren’t they? Maybe even bigger than any of us realised at the time. It might just be me, but it feels like they’re becoming more and more fondly remembered as time goes by. Perversely, though, dissolving his brilliant band may prove to be the best thing Christopher Owens could have done to promulgate his artistic legacy, untethering himself to make whatever the hell kind of record he wants. Maybe the end of Girls will eventually prove to be a mere irrelevant administrative footnote, because the evidence made available to us so far suggests that the force of Owens’ creativity is so irresistible that he would have captured his world on wax in his own singular way regardless of whatever name heads up the LP sleeve.

A New Testament comes to us with the tag of being Owens’ country album off the back of its singles ‘Never Wanna See That Look Again’ and ‘It Comes Back to You’. However, recent interviews suggest it could have just easily been his reggae album, or his show tunes album. Now that we’ve had a few albums to get used to his genre-hopping, both within the confines of Girls and without, it feels safe to say that the diversity of Owens’ work never feels forced or gimmicky. Even on his first album solo album, the unexpected flirtations with flutes and sax felt completely genuine. As a result, Lysandre proved to be just as important to his back catalog as any of his other work, when in less sincere hands it could easily have come across as some goofy sidestep to stubbornly assert his individuality.

It’s a similar story for A New Testament. Owens might have dabbled in the fashion world, but it's not as if he's just stuck a bunch of country songs on a record to match his new cowboy hat. It’s more that the cowboy hat he’s donning on the album cover happens to fit with the songs he’s chosen to commit to tape from his stockpile this time round. The style of the music feels like a completely natural means of expressing the emotions contained with this crop of songs. Just like the arrangements, Owens’ lyrics are frequently completely naked. It’s most obvious on ‘Stephen’, a truly gut-wrenching tale from his family history. The stories of Owens’ childhood in a religious cult whose reluctance to seek out a professional doctor probably cost his brother Stephen his life have been well-repeated, which means it’s tough to hear him sing "Just like an angel, he flew away / Gone from this Earth at two years of age" or "We were Children of God, but all that we wanted was our father’s love". It may not be an easy listen, but it’s still a definite high point not only in the context of this record, but also as far as his discography as a whole goes.

The unleashing of raw emotion is a dominant theme throughout the album, as you might probably expect, and it’s complemented beautifully by the gentle instrumental arrangements and splashes of gospel. However, there’s something in Owens’ delivery of all of these songs which exudes confidence which is at odds with the feelings expressed within them. You could say that he’s well and truly found his voice, and in a literal sense. While there were as many vocal styles as there were songs on Girls’ debut Album, as time has gone on, the honeyed croon which dominates A New Testament has gradually ensconced itself as the delivery you’d associate with Christopher Owens. It’s perhaps a mark of his growing assurance as a songwriter that he’s not precious about ceding control of the vocal, either, as he does on a number of occasions to his longtime collaborator Makeda Francisco here. As on Father, Son, Holy Ghost, her contribution augments the songs, perhaps less ostentatiously here, but in no less affecting a fashion.

As a whole, then, A New Testament is a fantastic record. It’s almost certainly the most consistent LP that Owens has released in either of his incarnations in terms of the quality of his songs as well as stylistically. If the world is just, then it should further enhance his reputation as one of the greats of our generation.