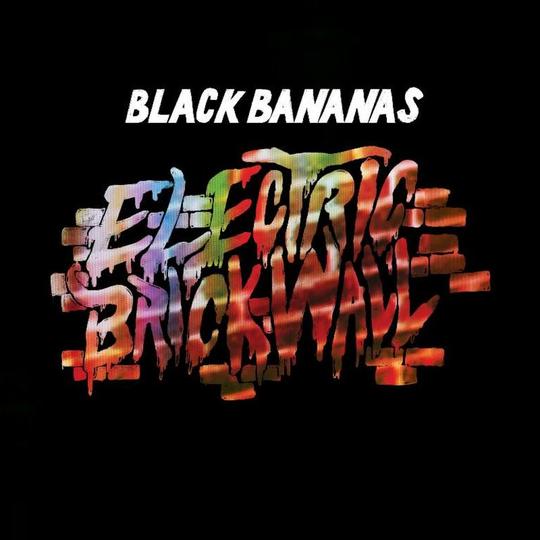 The second album by Black Bananas is an unapologetically snotty record with a title to match. Of course, there’s every possibility that Jennifer Herrema, leader of the (very) American quartet, would claim Electric Brick Wall has nothing to do with the widely disliked notion of brickwalled production – that harsh, digital and undynamic sound that defines a lot of modern rock music. But then, she also claimed that Black Bananas’ previous name RTX wasn’t supposed to be a callback to Royal Trux, her first band and the one which made her into a cult figure of Nineties independent rock.

Electric Brick Wall, it should be stressed, doesn’t sound like a modern rock album, at least not one likely to trouble any widely recognised charts. It does, however, wilfully employ OTT levels of mixing-desk distortion, with instruments and vocals alike fighting for the right to get in your face. Black Bananas’ utter disinterest in presenting a ‘natural sound’ makes mid-Eighties ZZ Top look like, well, early-Seventies ZZ Top. The total lack of sonic subtlety can feel kind of exhausting, on repeated listens, and if you prize music which purports to sound ‘organic’ or similar, this may make you puke blood. If nothing else, though, they’ve made an album which is unlikely to be mistaken for many other bands.

There are touchstones to be detected, of course: ancient and modern, self-confessed and probable happenstance. Herrema has spoke of the likes of Zapp and Funkadelic as an influence on the band, which makes a lateral kind of sense here, as it did on 2012’s Rad Times Xpress IV, the first release as Black Bananas. More songs than not (of 11 on the album) have a wanky guitar solo embedded in their framework. Variously, these call to mind Sunset Strip poodle metal (an aesthetic which this band sailed close to as RTX, notably on the JJ Got Live album), Prince and parts of Ariel Pink’s albums from about a decade ago. Thanks to said guitars being processed to the point of sounding more like synths – ‘Dope On an Island’, ‘Bullshit and Lies’ and, especially, ‘Eve’s Child’ are frankly slathered in such effects – at times you might recall the lurid maximalism of producers like Rustie and Hudson Mohawke, although Black Bananas’ grooves are proudly imperfect, and you can’t really dance to them.

‘Give It To Me’ is pretty conventionally catchy, that said, and feels a bit like a dirty dream about a Vanity 6 record; ‘Physical Emotions’, its closest rival for Black Bananas’ Pop Moment, thuds along on a bed of bone-dry syndrums and G-funk keyboards. Herrema’s Autotuned assertion, “It’s that feeling deep inside that’s making me wet,” could reasonably be described as out of character: while sexuality was very much a part of Royal Trux’s image, actual sex was at most something offhandedly alluded to. ‘Creepin’ the Line’, which follows it, lays the Autotune on even thicker, and seems to be the group’s nod to r’n’b slow jams, albeit with enough fuzz and flicker to have been yanked from a long-abandoned VHS.

There’s precious little of the riff salad bozo rock that characterised a good portion of the RTX albums, which is a slight shame because they were very good at it. (The main thing I recall from my single live encounter with the band, supporting Primal Scream, is one of the guitarists playing an instrument painted in snakeskin effect.) ‘Hey Rockin’’ and ‘Highway Down’ – Herrema tends to gravitate towards titles which sound like they were rejected by Van Halen, even when the music doesn’t – both chug along with rare discernable basslines, but for the most part Electric Brick Wall is too slippery and peculiar to be comfortably called rock music. Given that you can’t, in good faith, describe it as a dance or funk album either, it seems unlikely that this will be the album which elevates Jennifer Herrema to legit star status, after 25 years nosing around the concept. Still, she seems to thrive on creative control, as she should, plus she apparently gets paid to design clothes sometimes, which is almost certainly a bigger case of money for old rope than this awfully fun album.