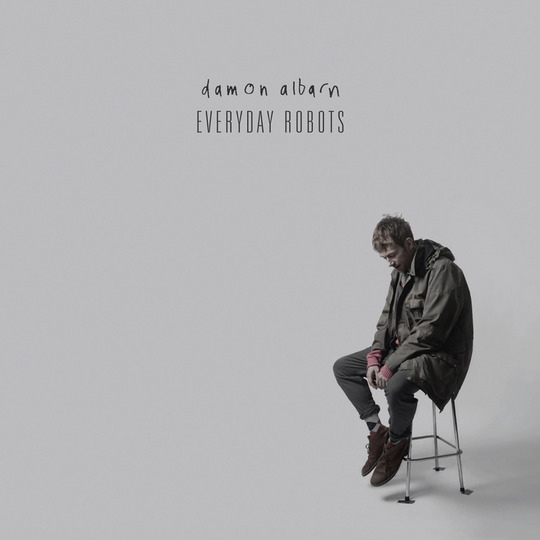 Seymour; Blur; Gorillaz; Mali Music; The Good, the Bad & The Queen; Rocket Juice & The Moon; Damon Albarn is not a man to put out a record under his own name when there’s an excuse to form a new band.

Everyday Robots isn’t quite solo in the most bludgeoningly literal sense – it’s co-produced by Richard Russell, and features a variety of low-key guests – but it’s Albarn unshackled by concepts or collaborators. And it's not a surprise to report that the deal is gorgeously stripped down wooziness, spiked with the eclecticism that's characterised all his post-Nineties projetcs - a skeletally funky Moroccan rhythm here, a loping electronic beat there.

If such a laid back record could be said to possess a statement of intent, then that title would certainly fall to the opening title track, which pretty much sets out the record’s stall. A languorous, melancholic vocal from Albarn, cradled by gentle polyrhymthic percussion and a naggingly chopped up violin signature, it’s exactly what you expect. But a key part of this is that you expect anything by Albarn to come with a twist of the unexpected - he's never going to turn out a two chord guitar ballad.

If there’s no concept to the record per se, then a recurrent lyrical concern of the first half is the dehumanising nature of technology - “we’re everyday robots… driving in adjacent cars, ‘til you press restart” he sighs. This is the sort of thing that’s been said before, but the words aren't those of a 47-year-old luddite grumbling about technology, just a regular bloke a little ground down by its omnipresence – Albarn is good when he sounds tired, and technology is making him tired.

Much has been made of how personal the record is, but there's nothing searing as Blur's rawest moments - the abiding sensation is one of intense intimacy. Shuffling seven-minute centrepiece 'You and Me' contains a sleepy allusion to his past heroin use ("Tin foil and a lighter, the ship across"), but really it's just an honest allusion from a man done with being coy - it's not a song 'about' heroin like 'Beetlebum' was, and for all the media fuss the line has generated, nobody actually listening to the song is likely to be shocked.

And it's not about the shocks: indeed by the third or fourth song you wonder whether Albarn’s kaleidoscopic whirl of esoteric influences and exotic instruments might ironically result in a record that would sound broadly the same if played out on a battered old acoustic. Underpinned by a difficult-to-place scraping noise, the languorously twinkling acoustic shuffle of ‘Hostiles’ sees him muse gently on communication with a lover; ‘Lonely Press Play’ mixes spare, bubbling bass and quiescent, intricate percussion to create a conventional but lovely romantic ballad.

But you do expect twists, and Albarn drops some meatier ones in as Everyday Robots wears on. Fleshed out by recordings of chirruping children and a gospel choir, ‘Mister Tembo’ is an unexpectedly jaunty song that strangely becomes about three times more charming when you realise it's about an elephant (a real life elephant! ). ‘Photographs (You Are Taking Now)’ is a beautiful electronic lope that builds to a delicately loopy electro groove that lasts a couple of minutes and really should go on for about five. And the closing ‘Heavy Seas of Love’, a duet with Brian Eno, of all people, is lovely and loopy, a puttering beat and vocal backing from The Leytonstone City Mission Choir’ yielding the most robust moment on the record, swooping between a deliberately clumsy gospel lullaby that builds an intractable, adorable momentum.

Everyday Robots is a lovely record, and in its lack of duds or whimsical twattery it’s probably one of most consistent things Albarn has ever put his name to. That doesn't make it the best, though: it doesn't take risks – not by Albarn’s standards, anyway – and in the most literal sense it's not all that exciting. But if its prettiness is conventional, if it gives us what we expect, then you know, you’ll listen to this a damn sight more than the Rocket Juice & The Moon album. Damon Albarn is at his best exploring pastures new, but that doesn’t make this wordly wise stocktake of a record any less of a pleasure.