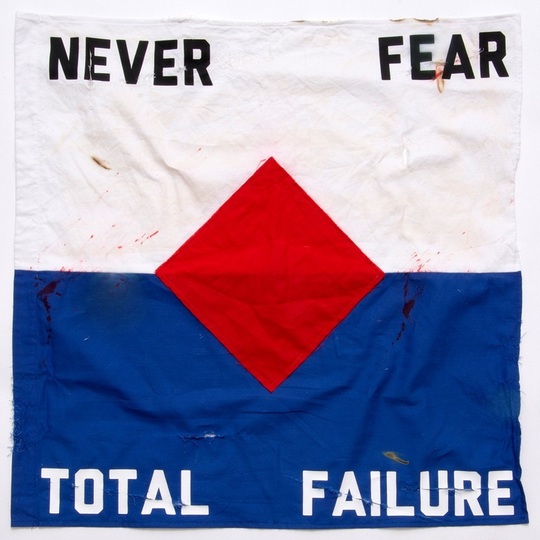 While reading an interview with Derby two-piece Ghost Twins, I couldn’t help but notice one of them, Andrew Foster talking of an 'overwhelmingly negative' reaction to the duo’s recent transformation. Foster and his compatriot Chris Jones used to make more rock-orientated music under the name Crushing Blows, but their electronic leanings eventually took precedence, leading to the band’s rebirth as Ghost Twins. Perhaps Derby’s music taste leans overwhelming towards 'proper music' ('bands and that, none of that synthesised shit,' as a particularly blokey bloke once put it to me), or perhaps it’s merely a product of the fact that people fear change as a rule. Either way, credit must go to the pair for sticking to their guns - even the title of their debut record, Never Fear Total Failure, is testament to their conviction.

Album opener ‘Breaking Friends’ also serves as a solid riposte to any doubters. You will hear all of the following during its sub four-minute running time: a menacing electronic throb, brief flourishes of twinkly piano, a relentless drum-machine powered beat, vocal inflections that wouldn’t be out of place on a BRMC song, bass tones that could have been borrowed from Warpaint’s debut, and majestic church organ sounds. And if that sounds like a total clusterfuck well… actually, it’s not at all. These disparate elements all combine to make a surprisingly coherent musical journey, condensed into the same length as your average pop song - demonstrating that Ghost Twins have no small amount of compositional skill.

On the other hand, '2006' is a lot more focused, mixing haunted Crystal Castles vocals and Atari Teenage Riot screams with an urgent, militaristic 16-bit march. While there could be many reasons for the repeated mantra of “2006 was a year to forget” - bird flu, England going out of the World Cup again, the proliferation of landfill indie - the final line of the chorus suggests something more personal is to blame - “I lost hope.”

With ’Sugar In My Hand’, however, a chink in the duo’s armour becomes apparent - the use of thin, gasping vocals that only ever serve as a distraction from the more interesting aspects of the song. Which is a crying shame, given its excellent juxtaposition of chilled electronica and more dark, menacing tones. The Alt-J-esque instrumentation of ‘The People You Will Never Meet’ also suffers this affliction, which is particularly frustrating as the atonal vocals sit alongside far more pleasant singing. ‘Yellow & Green’, meanwhile, never quite gets off the ground, spending most of its time mired in a claggy mess of distorted shouts and electronic fuzz.

‘You Will Always Be Lonely’ is the most obvious holdover from the duo’s days as Crushing Blows - even with the increased emphasis on electronics, it’s still the most conventionally structured song on this record. That’s no bad thing, however, particularly when there’s still more than enough room for a couple of satisfying instrumental breakdowns. Unfortunately, ‘Unknown Animal’ sees that awkward, gasping voice come back with a vengeance. After the vocals dominate the sparse, piano-led first half, the propulsive electronics of the second half make it really seem like the song is finally getting up and running - until the vocals come back in and mar that feeling somewhat.

Indeed, while it would be too harsh to say that Ghost Twins have a knack for writing half a good song, there is a recurring pattern on Never Fear Total Failure - namely, the band often save their best moments for the end of a track. Along with the aforementioned ‘Unknown Animal’, there’s the post-rocky ending to ’The People You Will Never Meet’, ‘Into The Sea’s fragile, melancholy second half, and the shimmering, Horrors-esque instrumental that fades out all too soon at the close of ‘Fantasyland’. I’m not quite sure whether it’s an admirable or frustrating choice - either way, it’s very much at odds with the ADHD manner in which music tends to give it you all upfront in recent times.

In the end, it seems that Never Fear Total Failure is aptly titled - it’s neither a total failure nor an unqualified success. This debut paints a picture of a band with no shortage of ideas - many of them good, some not so much. And that’s actually ok. The expectation that a band should arrive fully formed on album one is pretty ridiculous, even in this era of fragile hype bubbles. Bands should be allowed to experiment and learn without being written off as unsuccessful - and hopefully, that’s an opportunity that Ghost Twins will be given. Never Fear Total Failure has afforded them that much, at the very least.