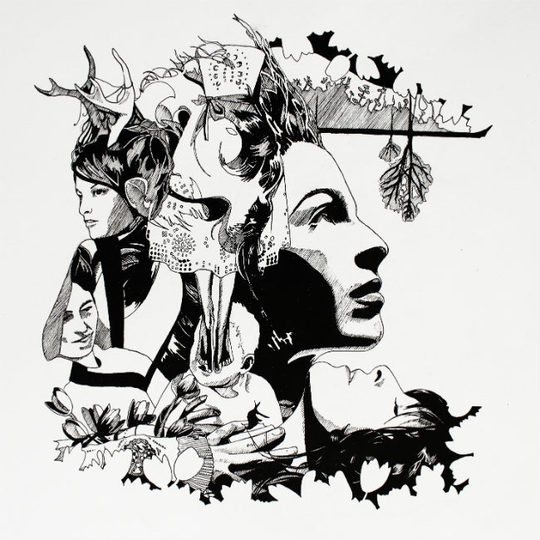 The 'issue' with this record is clear from the off; Undress isn’t an original effort, per se - it's a stripped-back, largely acoustic take on the tracks from Jesca Hoop’s second LP, Hunting My Dress. You’re bound to form an immediate opinion, of course, as to whether it’s an ambitious reworking or a lazy do-over.

There’s evidence to suggest that the album was a bit of a labour of love, with funding coming via Pledge Music. The reshuffling of the track listing, too, indicates genuine consideration; bare-bones versions of already-released songs may be the preserve of bonus discs and iTunes add-ons, but you do get the impression that Hoop is trying to present Undress as an entity independent of Hunting My Dress. 'Murder of Birds', now underscored plainly by a single, noodling guitar, is up first this time around, thrusting Hoop’s collaboration with Guy Garvey to the fore.

The slightly quieter sonic environment probably suits Garvey’s non-intrusive turn a little better, but honestly, there’s precious little difference between this version and the original. That’s not something you can say of 'The Kingdom': on Hunting My Dress it rang out with thuddingly dramatic drums, but sounds frustratingly muddled without them here. 'Angel Mom', too, leant on eccentric percussion and layered vocals on the thrilling original, but feels tediously one-track without them on Undress.

There’s instances of the new approach paying dividends: Iron & Wine’s Sam Beam, a recent tourmate of Hoop’s, brings his not-inconsiderable talents to the original record’s title track; anybody who’s seen him play live will surely attest to the fact that the sparser the instrumental environment, the stronger he tends to sound. Less successful is the decision to bring in Willy Mason, who duets on 'Whispering Light' - without the considerably richer textures of the original, Hoop’s vocals are washed away by Mason’s impressive but ultimately all-encompassing baritone.

It’s not that Hoop’s strong songwriting is shown up as any weaker; it’s more that so much of what made Hunting My Dress so intriguing was tied up in the way in which the instrumental choices constantly kept you guessing, meaning that much of Undress feels a little vanilla by comparison. There’s certainly some highlights; the snarling guitar on 'Four Dreams' lends some real bite, and 'Feast of the Heart’s blend of marching-band percussion and genuine vocal conviction is gripping. It’s just that we’ve already heard these songs done better.

The inclusion of a cut from Hoop’s Snowglobe EP - 'City Bird' - is a little jarring, too, but ultimately the problem with this record is less to do with the songs themselves - most of which are superbly crafted - and more related to the fact that most of these acoustic versions are inferior to the ones we heard on Hunting My Dress. If Hoop’s aim was to prove that that record’s songs stand up equally well in this sparser form, then she’s failed, but there’s nothing on Undress that diminishes her as a songwriter; it’s just that it seems a mistake to strip some fine tracks of what made them so enthralling in the first place.