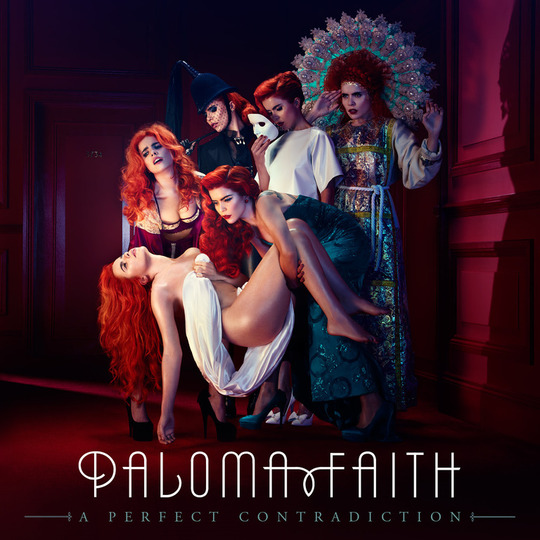 Touted as an album that sees her revisit her roots, Paloma Faith’s third set A Perfect Contradiction does indeed resurrect her old inspirations but fails to flesh them out. It’s an album that draws, and does so heavily, from the bygone eras of the Sixties and Seventies, heavy with nods to doo-wop and disco.

It begins with the Pharrell Williams-produced ‘Can’t Rely On You’ with a funky rhythm and plenty of cowbell. While it’s been alleged that it lifts a riff off a certain Franz Ferdinand hit (‘Take Me Out’) and the two are not dissimilar, ‘Can’t Rely On You’ serves as the album’s first single as well as A Perfect Contradiction’s mission statement. The rest of the album follows in the same vein with songs more soul than pop, aping not chart pop standards but the less famous source material she takes inspiration from.

The title is a reference to a supposedly mercurial sound, shifting from the Adele-esque 'Fall To Grace' with its cinematic scale and powerhouse vocals to a more upbeat jive. But in actual fact the stylistic variations are minor at best and it’s an album that’s too safe for any of contradiction in style to even matter.

There’s plenty on the album that dips back in time with tracks such as ‘Mouth to Mouth’ showing a more soulful side to Faith. It relies on repetition and it’s often used effectively, imbuing energy to the Motown-inspired ‘Trouble With My Baby’. But as the album trundles along, its edge quickly dulls. A track like ‘Other Woman’ cycles through its entire bag of tricks in under a minute and proceeds to cut and paste them over the rest of the song.

The album’s disco tunes, particularly ‘Impossible Heart’ and ‘Mouth to Mouth’ fare much better. On standout track ‘Only Love Can Hurt Like This’, Faith achieves a fine balance of emotive clarity and staying true to her influences. Though much of this is due to Dianne Warren’s song-writing using choruses to heighten the drama with each reiteration, Faith lends her voice jumping octaves with power yet retaining control.

But while Faith gets the style right, the substance leaves one wanting. The whoops on ‘Take Me’ are empty and mechanical, added as if they mapped out by an algorithm. The album’s filler songs, down to the tired "sha-la-la"s, feel as they've been run through a hipstamatic retro filter. Paloma Faith and retro soul have been flirting with each other since Day One but this time the dynamic is a little dull and generic.

For an album that’s deeply indebted to soul music, there’s not much soul in evidence. Faith’s vocal delivery comes packed with an emotional weight but that has more to do with technique than expression. On previous albums, like her debut Do You Want The Truth or Something Beautiful? she’s managed at least a touch of believable sentiment. She barely scrapes through on A Perfect Contradiction, her performances just two sighs shy of a Glee cover.

It’s an album that’s riddled with lyrical clichés, but I suppose at this point we shouldn't be surprised when it comes to Paloma Faith’s lyrical prowess – or lack of. There’s talk of moths and flames, and dictating her schedule (“7am and the sun is up… 9am, I’m off to JFK”) on ‘Take Me’ – which may well be a song Janelle Monae turned down.

If anything A Perfect Contradiction’s only contradiction is how much it summons some of the livelier eras of music only to hollow them out. It’s an album that provides a taste of something familiar, yet somehow flavourless.