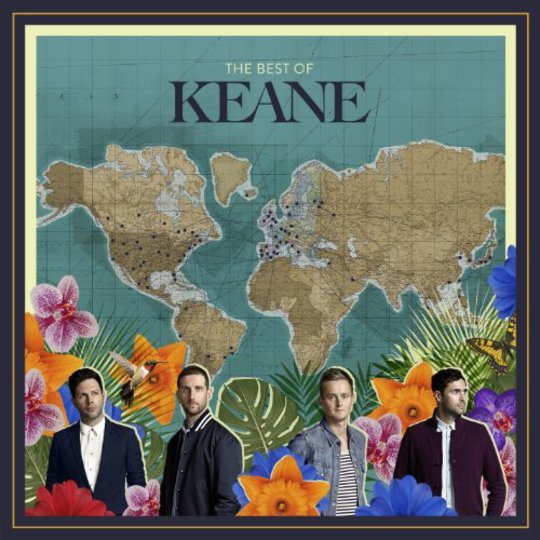 It must be a source of great misery to Keane’s most heated detractors to see the amount of success they’ve had since their first release 10 years ago. They topped the BBC’s most commercially successful Sound Of… list back in 2004, had 4 albums (and an extended E.P) reached #1 in the UK album charts, and are still regarded as relevant enough to perform on Strictly Come Dancing (although admittedly, so is former Bros member Matt Goss). Ahead of their upcoming hiatus, the band have released The Best of Keane , a 20-track compilation that collects the ‘highlights’ from their career to date.

The album starts, appropriately enough, with songs from their mega-multi-selling debut Hopes and Fears. It kicks off with the one-two blow of ‘Everybody’s Changing’ and ‘Somewhere Only We Know’, two songs that only the harshest of critics would deny them to be classics of the mid 00s. ‘This Is The Last Time’ may not have risen to the same pantheon, but it still holds up well as one of the band’s most anthemic songs, whilst ‘Bend & Break’, treads a similar path of rock sincerity. ‘Bedshaped’, hasn’t held up as well, but it still shows Keane at their most fragile and emotional, and alongside the other 4 tracks offers a firm reminder that despite being labelled as “sub-Coldplay” and “music for bedwetters”, Keane sure did have some great songs at their disposal at the beginning.

It’s just a pity that it all goes downhill after that. For some odd reason, Under The Iron Sea is better represented on The Best of Keane (7 songs to the 5 of Hopes and Fears), including several songs that have no right to grace anyone’s Best Of. ‘Atlantic’, ‘Try Again’ and ‘Hamburg Song’ are plodding, dull monotonous examples of Keane-by-numbers, whilst ‘Nothing In My Way’ is so overtly mawkish that even Starsailor would have turned their noses up at it. Even the better songs in the belly of the record are a disappointment - ‘A Bad Dream’ is just a rehash of the superior ‘Bedshaped’, whilst ‘Is It Any Wonder?’ and ‘Crystal Ball’ might have sounded fresh in 2006, in a bygone era when U2 could still challenge for #1 singles, but in 2013 they just sound trite.

In contrast to the mammoth representation of Under The Iron Sea, their much underrated experimental (read - uses guitars) third album Perfect Symmetry is represented by only two tracks, eschewing a few singles in the process. The album's title track features and it is very much an example of Keane’s middling sound. However, ‘Spiralling’ showcased Keane, for perhaps the only time in their career, in exhilarating day-glo mode. It is a sleek, shiny number which is no doubt one of the great pop singles of the past five years. Listening to what came after this song leaves a bitter taste in the mouth - this was the exciting (read - less dull) direction that the band could have taken in the years following its release. It’s just a pity they seemed to fall back into autopilot mode for subsequent releases.

More inexplicable sequencing decisions crop up later on, with their last top 40 single ‘Stop For a Minute’ being omitted completely in favour of another cut from their Night Train E.P, ‘My Shadow’. Their most recent album Strangeland gets three tracks, which highlight Keane at a point when they raised a few eyebrows by deciding they wanted to be Bruce Springsteen. Try singing along to ‘Sovereign Light Cafe’ in a New Jersey accent and you’ll understand exactly what I mean. The two new tracks on the album don’t offer anything interesting or exciting - the former being a slow electronic-led song that seems to exist only to help Radio 2 fill up their playlist, whilst the more upbeat ‘Won’t Be Broken’ gives off the familiar whiff of ‘contractual obligation’.

As a culmination of the last 10 years of the band, The Best of Keane is something of a disappointment, feeling bloated whilst simultaneously leaving out quite a few important tracks. The album should only be seen as an essential purchase for Keane completists. For everyone else, just buy Hopes and Fears and download ‘Spiralling’ (the album version, not the shortened version featured here). It makes for a better eulogy to the Keane legacy. For the moment anyway.