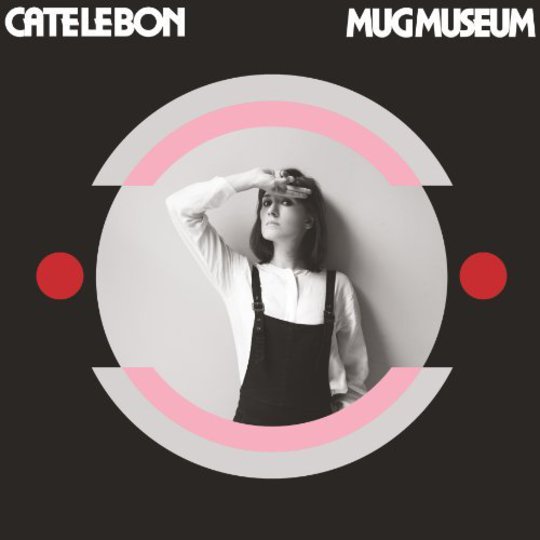 Cate le Bon didn’t give anyone much of a chance to pigeonhole her music. Her first release was a collection of twee Celtic-folk pieces, performed in Welsh – a debut release liable to weigh her with a certain collection of preconceptions and expectations. Since then, her recorded output has resisted what could have been a slide into easy categorisation. She’s used her arrangements to turn soft lullabies into spiky, dissonant things, and carved a singular identity which she continued to explore and refine on last year’s excellent CYRK (and CYRK II).

Mug Museum broadly finds her much more confident within her sonic surroundings, having more firmly found her footing in the landscape she’s built for herself since the Edrych yn Llygaid Ceffyl Benthyg EP. The opening song ‘I Can’t Help You’ is now prime Cate le Bon material – built on a close to one-note, angular guitar riff, she scatters ideas and melodies over the top; soft horns swooping in to round the corners of her tangled guitar-battering in the choruses.

Songs like this – along with plenty of others on Mug Museum – find le Bon synthesising her recent explorations into new musical territories into something much more unified. CYRK tended to take entire songs to play around with a new idea – taking three minutes to enjoy a rocking stomp; and another song entirely to play around with more abstracted noise collages. But on Mug Museum, she frequently succeeds in lacing disparate musical ideas throughout all of her songs rather than addressing them in turn, making her composition much richer.

However, Mug Museum ultimately finds itself valuing texture, tone, and overall identity at the expense of the songs themselves. The songs of CYRK always had a robust core of straight up song-writing and sounded just as charming as a solo acoustic piece as they did in their instrumental finery on record. But with many of these songs, it’s hard to imagine them surviving the translation – almost all choruses being a borderline-spoken repetition of the song’s title across an interesting textural idea, but with a distinct lack of melodic development across all of the songs.

Thankfully, songs like ‘Duke’ and ‘Cuckoo Through the Walls’ not only remind us of everything there is to adore about Cate le Bon, but also assure us that her best work may still be ahead of her. With ‘Duke’, for instance, Cate takes a much more successfully fleshed out vocal line, and finds ways to more satisfyingly interact with her busier arrangements – beating upstream against a syncopated snare on the bridge, and pushing with the swell of an organ on the chorus’ climax.

And at that final climax, Cate strains her way into a series of ascending high notes clearly at the outer edges of her range. Not everyone would have the heart to attempt a move like that, and even fewer would leave it in the finished recording. But for Cate le Bon, it’s a perfect example of the charming earnestness which makes even her most underdeveloped material a pleasure to listen to. So while Mug Museum is probably Cate le Bon’s weakest collection of songs, it’s nonetheless a great refinement of her recent artistic development, a typically rewarding showcase of gutsy eccentricity, and the promise of more satisfying material to come.