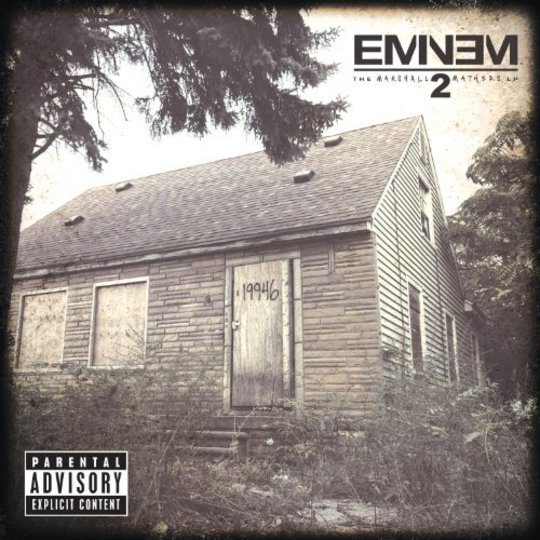 Funny and intelligent though Eminem often is, even at his most deplorable (all that misogyny and homophobia that lurks throughout his lyrics has always been problematic), his saving grace is Marshall Mathers’ infinitely fractured personality; is he genuinely advocating what he’s saying or is he in character?

It was a question that dominated The Marshall Mathers LP and one that he addressed perfectly in ‘Stan’, satirising the media frenzy about the violence his songs might inspire whilst counselling, “maybe you just need to treat her better”. He had just devoted a track to rapping about killing bitches, but the distinction was clear. What happens on record isn’t okay in real life (despite his own history). The point is that ever since he first got the outraged reaction he was looking for, Eminem has been mocking the humourless critics who take what he’s saying entirely seriously – the jokes and insults, like his true self and his alter-egos, have long been expertly blended.

Thirteen years later, and the master of self-referential mythologizing is back on top form. With The Marshall Mathers LP 2, the connection to its iconic prequel is explicit. As well as revisiting the sounds of his earlier album with rock-rap production and furiously fast flow, he further complicates and enriches his web of self-obsession by scattering call-backs throughout the album (the “Hi!” from ‘My Name Is’, a snippet of the hook from ‘The Real Slim Shady’ and more). Even better, many lines are careful echoes of the past, pseudo-homonyms that both subvert his old lyrics and beautifully mess with our expectations. On ‘Asshole’, it’s the altered line “Soul’s escaping through this asshole that is gaping, whilst ‘So Far’ has him again “spittin’ on your onion rings” and the ‘Rap God’s dizzying flow conceals references to ‘Kill You’ and ‘My Dad’s Gone Crazy’. When he raps “It’s just you and the music now, Slim, I hope you hear it; we’re in the car right now – wait, hear comes my favourite lyric! during ‘Bad Guy’, he knows exactly what he’s doing – this is meticulous manipulation of the millions who have his words seared into their minds and it’s grin-inducingly glorious.

The Inceptionesque complexities of his inter-alter-ego references at the heart of MMLP2 are most overtly laid bare in its opening and closing tracks. ‘Bad Guy’ tackles Marshall Mathers’s biggest legacy head on, kicking things off with an astonishing, seven minute follow-up to ‘Stan’. Initially, with the simplistic flow, he takes the voice of Matthew (“that’s my little brother man, he’s only six years old”…), taking revenge for his long-dead older brother: this time around, it’s Eminem screaming in the trunk. It’s a chance, confusingly, for Eminem to take a shot at himself, as Matthew mimics him “I’m the bad guy who makes fun of people that die / And hey, here’s a sequel to my Mathers LP just to try and get people to buy” – he’s always been a fantastic mimic of his critics. Deeper self-analysis comes, as “Matthew” raps “I’m the bullies you hate that you became with every faggot your slaughtered / Coming back on you every woman you insulted with the double-standards you have when it comes to your daughters” – he’s well aware of his own hypocrisies and it’s irresistible listening.

Closer ‘Evil Twin’ is just as satisfying complex, another piece in the jigsaw as the album continues to seesaw wildly between justifying, apologising for, and glorying in his own character creations. Here, it’s all swagger, he’s the “borderline genius who’s bored of his lines”. Singing sweetly, he proclaims “That ain’t me [...] he’s just a friend who pops up now and again, so don’t blame me – blame him” – but it’s never that easy. Next, he spits “Then again, who wants a plain Eminem […] look at that evil grin, evil twin, please come in!” before proclaiming “Still Shady inside, hair every bit as dyed as it used to be when I first introduced y’all to my skittish side and blamed it all on him when they criticised – cus we are the same, bitch” – Jesse Pinkman, eat your heart out. Immature insults, self-obsessed analysis, and deadly flow - Eminem is back, the same old hot mess he’s always been.

Aside from the occasional freestyle, Em' hasn’t stretched himself like this in a long time. It’s an album that’s jam packed with ideas; constantly upping the ante with each verse and unstoppably gaining momentum with every track. It’s incredibly energetic and bursting with evident enjoyment despite the anger that’s being chronicled; for a man who’s just turned forty, he hasn’t sounded this young since 2002. Slinking ‘Rhyme or Reason’ packs the jokes in as he further explores his thoughts about his father, ‘Headlights’ contains an astonishing apology to his mother ("I love you Debbie Mathers, oh what a tangled web we have"), and ‘Rap God’ is the fastest, most technically complex song Eminem has ever recorded. The excellent ‘Love Game’ will be a genuine passing of the baton if this really is Em’s last album. Kendrick Lamar’s verse is exemplary, but it’s irrelevant whether or not you consider him to have “outshone” Eminem. Despite the earlier “why be a king when you can be a god” putdown, this is still the Eminem show, and adding Lamar’s skills to the mix is a generous move – he isn’t close to being threatened by Kendrick.

Imagine a world where Dr Dre had never uncovered Detroit’s greatest export, that this was somehow your first time hearing Eminem, and there’s no way that MMLP2 would not be as seismically important and game-changing as its prequel. This is Eminem’s best record in a decade – and one of the most impressive, entertaining and addictive hip-hop albums of the year.